A Complete Guide to the Securities Industry Essentials (SIE) Exam 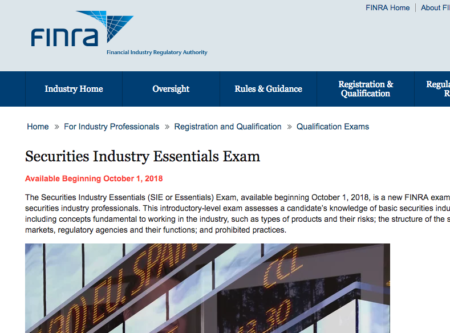 Beginning October 1, 2018, FINRA will overhaul the format of its regulatory exams: A new general knowledge exam called the Securities Industry Essentials (SIE) will become a corequisite for the Series 7 (General Securities Representative), Series 79 (Investment Banking Representative) and other Series Exams.

The previous FINRA format was often criticized for too much overlap of content across the individual Series exams, and finance professionals looking to remain in good standing found the need to take multiple Series exams inefficient and costly. The new format aims to fix these issues.

SIE Exam at a Glance

Below is an overview of the topics (or, for an enthralling read, head to the FINRA site and download the full SIE content outline).

Unlike the Series 7, Series 79 or any other Series Exam, you do not need to be sponsored by an employer to take the SIE. FINRA hopes this will encourage students and prospective finance professionals to gain an understanding of basic financial knowledge prior to employment. FINRA has priced the exam accordingly at $60. However, you still need employer sponsorship to take a top-off exam (Series 7, Series 79, Series 6, etc.).

Should I take the SIE?

We’ll refrain from a full assessment until the exam is administered. However, for those considering the SIE as a way to gain financial skills valued by employers, we are skeptical about its usefulness. That’s because unlike financial training that investment banks actively seek out for new hires, the Series exams are widely perceived by employers as irrelevant to a finance professional’s day-to-day.

Josh Brown, author of “Backstage Wall Street: An Insider’s Guide to Knowing Who to Trust, Who to Run From, and How to Maximize Your Investments,” captured this sentiment well:

The Series 7 exam requires you to memorize enough useless information to get through a 6-hour, 250-question test. Most of the useful calculations one learns for the test are done by computers in the real world, and most of the ethics questions are obvious, making this the most pointless barrier-to-entry exam being given in the United States today. You should meet some of the cavemen I know who’ve managed to pass it.

Since the SIE appears to be a watered-down version of the Series 7, students looking to develop and demonstrate mastery over financial concepts are for now far better off seeking any of the following resources:

Preparing for the SIE

Given that the exam is far shorter and focuses on basic industry knowledge, we suspect it will basically be a Series 7 “light.”

FINRA has not yet administered the SIE, nor have they provided a passing score, so a full discussion on how to prepare is premature. However, we can see from FINRA’s SIE content outline that there appears to be significant overlap with the previous Series 7. Given that the exam is far shorter and focuses on basic industry knowledge, we suspect it will basically be a Series 7 “light.” If that turns out to be the case, SIE exam prep will likely be a mercifully shorter version of Series 7 exam prep.

The Series 79 is the Series exam for investment banking professionals who exclusively engage in advisory services to corporations. Similar to the Series 7, it will be shortened and become a corequisite (“top off”) to the SIE. It will go from a 5-hour, 175 question multiple choice exam to a 2 hour, 30 minute exam with 75 multiple choice questions.

Learn more about the Series 79

Most states (including New York) require any professionals who carry the Series 7 and several other Series exams licenses to also pass the much easier and shorter Series 63 Uniform Securities Agent license (or the Series 65 or Series 66, depending on their roles).

So an investment banker practicing in New York will likely need to take the SIE, the Series 79 (or Series 7) and the Series 63.

New hires in the summer of 2018 should take extra care to pass their Series exams, because after October 1, 2018, they’ll have to take the SIE. Per FINRA:

Below is FINRA’s breakdown of all the Series Exams that are becoming top-offs to the SIE.

Not sure about the others but Kaplan study materials for the SIE have about zero to do with the actual test questions. There are a huge amount of topics and terms that aren’t touched in the Kaplan materials anywhere.

Where do candidates get the study guide/books to prepare for the SIE exam?

Is there any company offering Series 22 study materials now? Thank you!

Where do candidates get the study guide/books to prepare for the SIE exam?

thanks, i heard that a lot of people recommends Serdemy, have anyone tried can share account with me?

Is there an exact date for the first round of SIE testings?