What is the Industry Beta Approach?

The Industry Beta is an alternative approach to estimating a company’s beta, in which a peer-group derived beta is applied to the target being valued. 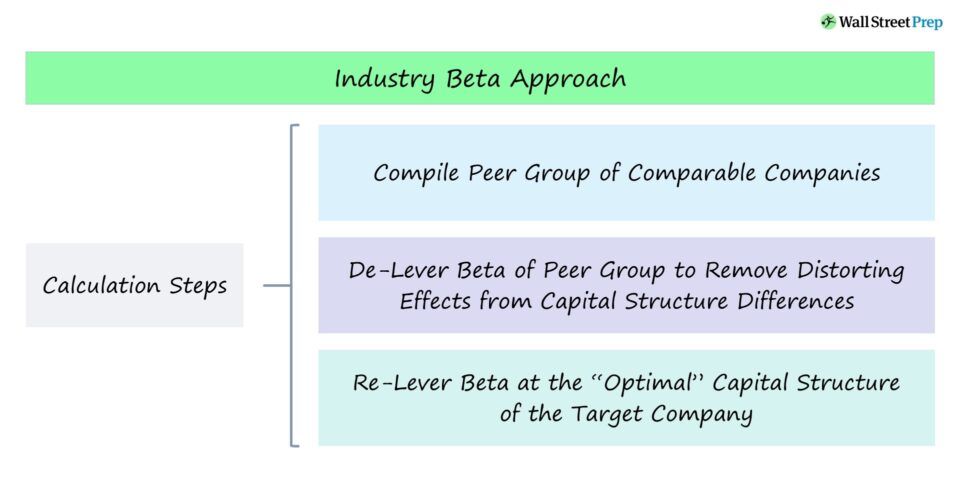 Beta (β) is a metric that represents the sensitivity of a security or portfolio to systematic risk, i.e. the relative volatility compared to the broader market (S&P 500).

However, beta is under constant criticism from industry practitioners based on the notion that it is a flawed measure of risk.

The process of calculating beta is by running a regression model that compares a stock’s historical returns to the market benchmark returns (e.g. S&P 500) for a specified time span.

The slope of the regression line represents the beta of the company – but there are several issues:

Benefits to the Industry Beta Approach

The limitations to the beta calculation – namely those related to the capital structure – explain why the industry beta may be used.

The regression model is based on the historical data (and capital structure weights), as opposed to the current debt-to-equity mix, which would be more accurate in projecting future performance and volatility.

As an alternative, the industry beta approach calculates a company’s beta by integrating an aspect of “comps” to determine its future volatility.

The implied assumption here is that the target company’s business risk will gradually converge to be on par with that of its peer group over the long term, i.e. the performance of comparable companies is more indicative of the company’s future performance than the company’s own historical performance.

In practice, however, both the observed beta and industry beta are calculated side-by-side as a sanity check.

The benefits are that any company-specific noise is eliminated, which refers to eliminating distorting events that could’ve potentially caused the correlation in its historical beta to be misleading.

Therefore, the industry beta – i.e. the peer-group derived beta – is a “normalized” figure because it takes the average of the unlevered betas of comparable businesses, which is then re-levered at the target capital structure of the company being valued.

How to Calculate the Industry Beta

Levered and unlevered beta are two different types of beta (β), with the distinction being related to the inclusion or removal of the impact of debt in the capital structure.

The process of calculating the industry beta is a three-step process: