Guide to Understanding the Capital Structure

What is the Capital Structure?

The Capital Structure refers to the mixture of debt, preferred stock, and common equity used by a company to fund operations and purchase assets.

The term “capital structure”, or “capitalization”, refers to the allocation of debt, preferred stock, and common stock by a company used to finance working capital needs and asset purchases.

Raising outside capital can often become a necessity for companies seeking to reach beyond a certain growth stage and to continue expanding their operations.

Companies can choose to raise outside capital in the form of either debt or equity.

Debt financing is generally perceived as a “cheaper” source of financing than equity, which can be attributed to taxes, among other factors.

Unlike dividends, interest payments are tax-deductible, creating a so-called “interest tax shield” as a company’s taxable income (and the amount of taxes due) is lowered.

By opting to raise debt capital, existing shareholders’ control of the firm’s ownership is also protected, unless there is the option for the debt to convert into equity (i.e. convertible debt).

All else being equal, the lower the percentage of the total funding contributed by equity investors, the more credit risk that the lenders bear.

If the return on investment (ROI) on the debt offsets (and earns more) than the cost of interest and principal repayment, then the company’s decision to risk the shareholders’ equity paid off.

The downside to debt, however, is the required interest expense on loans and bonds, as well as mandatory amortization payments on loans.

The latter is far more common for senior debt lenders such as corporate banks, as these risk-averse lenders prioritizing capital preservation are likely to include such provisions in the agreement.

Senior debt is often called senior secured debt, as there can be covenants attached to the loan agreement – albeit restrictive covenants are no longer the norm in the current credit environment.

The borrower must repay the remaining principal in full at the end of the debt’s maturity – in addition to the interest expense payments during the life of the loan.

The maturity date depicts how debt is a finite financing source in contrast to equity.

If the company fails to repay the principal at maturity, the borrower is now in technical default because it has breached the contractual obligation to repay the lender on time – hence, companies with highly leveraged capital structures relative to the amount that their free cash flows (FCFs) can handle can often end up in bankruptcy.

In such cases, the unsustainable capital structure makes financial restructuring necessary, where the debtor attempts to “right-size” its balance sheet by reducing the debt burden – as negotiated with creditors either out-of-court or in-court.

Cost of Equity vs. Cost of Debt: Which is Lower?

If debt begins to comprise a greater proportion of the capital structure, the weighted average cost of capital (WACC) initially declines due to the tax-deductibility of interest (i.e. the “interest tax shield”).

The cost of debt is lower than the cost of equity because of interest expense – i.e. the cost of borrowing debt – is tax-deductible, whereas dividends to shareholders are not.

The WACC continues to decrease until the optimal capital structure is reached, where the WACC is the lowest.

Beyond this threshold, the potential for financial distress offsets the tax benefits of leverage, causing the risk to all company stakeholders to rise. Thus, debt issuances impact not only the cost of debt but also the cost of equity because the company’s credit risk increases as the debt burden increases.

This is particularly concerning for equity holders, who are placed at the bottom of the capital structure, meaning they represent the lowest priority claim under a liquidation scenario (and are the least likely to recover funds in the case of bankruptcy).

Lastly, while the shareholders are partial owners of the company on paper, management has no obligation to issue them dividends, so share price appreciation can often be the only source of income.

However, the share price (and capital gain) upside belongs entirely to equity holders, whereas lenders receive only a fixed amount via interest and principal amortization.

Early-stage companies rarely carry any debt on their balance sheet, as finding an interested lender is challenging given their risk profiles.

In contrast, if a borrower is a mature, established company with a track record of historical profitability and low cyclicality, lenders are far more likely to negotiate with them and offer favorable lending terms.

Consequently, a company’s stage in its life cycle, along with its cash flow profile to support the debt on its balance sheet, dictates the most suitable capital structure.

Most companies seek an “optimal” capital structure, in which the total valuation of the company is maximized while the cost of capital is minimized.

With that said, the objective of most companies is to balance the trade-offs among the benefits of debt (e.g. reduced taxes) and the risk of taking on too much leverage.

The cost of capital accounts for the weight of each funding source in the company’s total capitalization (and each component’s separate costs).

The expected future cash flows must be discounted using the proper discount rate – i.e. the cost of capital – for each individual source of capital.

In effect, the lower the cost of capital (i.e. the “blended” discount rate), the greater the present value (PV) of the firm’s future free cash flows will be.

Leverage ratios can measure a company’s level of reliance on debt to finance assets and determine if the operating cash flows of the company generated by its asset base are sufficient to service interest expense and other financial obligations.

The company’s total capitalization in both cases is $1 billion, but the major distinction is where the funding came from.

We’ll assume the company’s EBIT is $200 million in both cases, the interest rate on debt is 6%, and the applicable tax rate is 25%.

The taxable income is equivalent to EBIT for the all-equity firm, since there is no tax-deductible interest. As a result, the tax expense is $50 million, which results in net income of $150 million.

Since there are no required payments to debt holders, all of the net income could hypothetically be distributed to equity holders as dividends, share buybacks, or kept in retained earnings to reinvest in the company’s operations.

Next, for our company with the 50/50 capital structure, the interest expense comes out to $30 million, which directly reduces taxable income.

Given the 25% tax rate, the tax incurred is $7 million less than in the all-equity scenario, representing the interest tax shield.

In the final step, we can see that the net income is lower for the company under the capital structure with debt.

Yet, the total distribution of funds is $8 million higher for the company with debt than the all-equity company because of the additional amount that flowed to debt holders rather than being taxed.

The capital structure should be adjusted to meet a company’s near-term and long-term objectives. 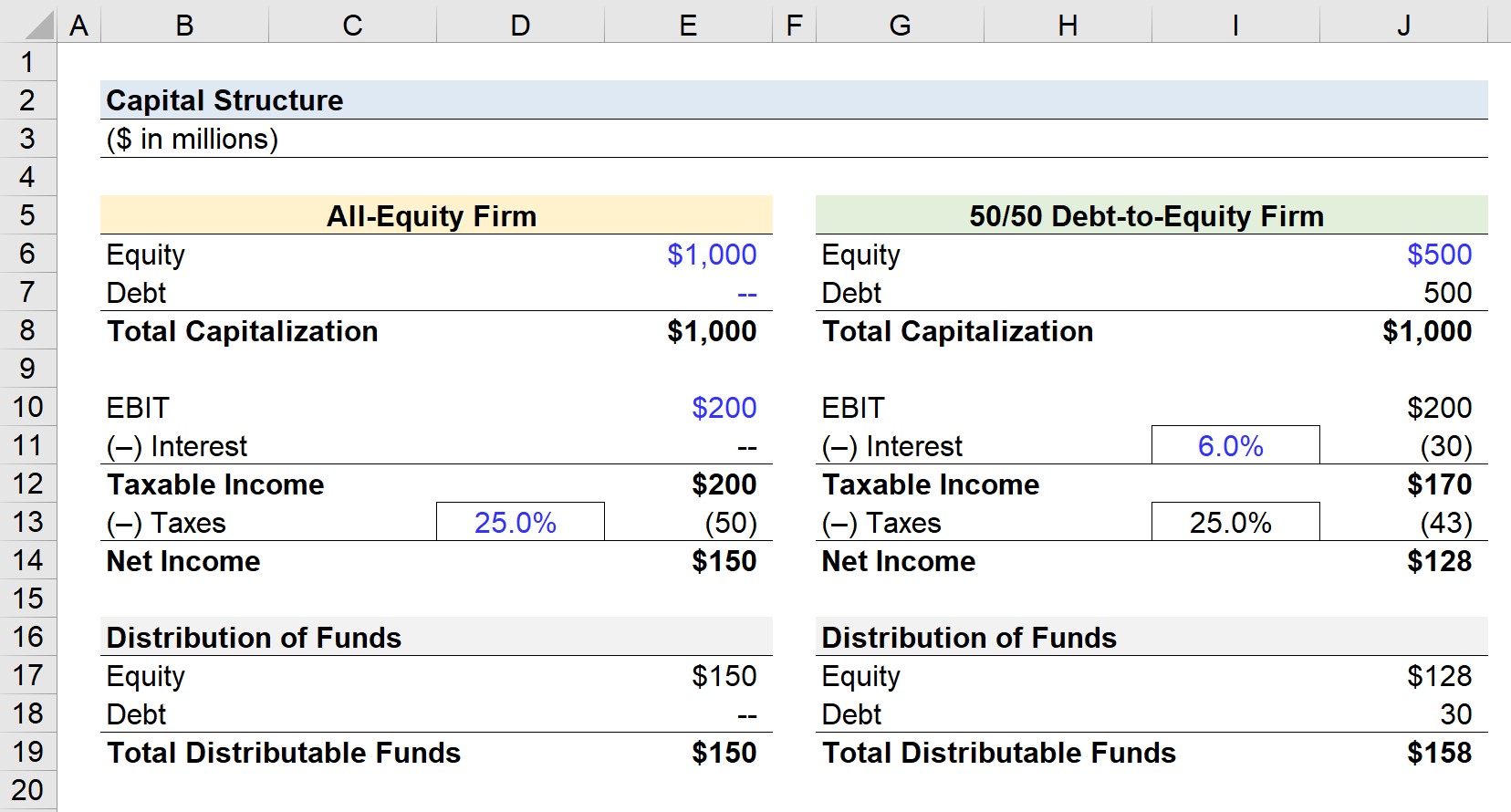