What is a Minority Investment?

A Minority Investment is a non-controlling investment (<50%) into a company’s equity, in which the firm does not possess majority ownership.

A minority interest refers to investments with less than 50% equity ownership.

In the private equity industry, firms specializing in minority investments obtain a non-controlling stake in a company’s equity in exchange for capital.

The objective of minority investments is to provide capital to a company already exhibiting significant growth and trending in an upward trajectory.

The two types of firms that most commonly engage in minority investments within the private markets are the following:

If an institutional firm makes a minority investment in a company’s equity, it owns a significant percentage of the total equity interest, yet its stake is non-controlling.

While there can be exceptions, such as with highly-regarded VC firms – most firms that make minority stake investments, especially those that invest in the later stages of a company’s lifecycle – tend not to be influential in the company’s decisions and strategies.

Generally, minority investments consist of around 10% and 30% of the company’s total equity. In contrast, a majority investment implies the firm’s equity ownership exceeds 50%.

The trade-off here is that minority investors hold less influence over the company’s decisions and strategy, but controlling the company’s decisions is rarely the firm’s objective, anyway. Instead, the firm recognizes the company’s outlook is promising and seeks to participate in the upside potential (and is thus “along for the ride”), even if that means their investment strategy is relatively “hands-off”.

One recent example of a minority investment – or more specifically – a struggling public company attempting to raise capital, is Peloton (NASDAQ: PTON), the fitness equipment maker that saw its stock price reach record highs during the pandemic.

Peloton is seeking potential investors, such as strategic buyers and private equity firms, to acquire a 15% to 20% stake as it attempts a major turnaround.

But as mentioned earlier, most firms that make minority stake investments have a “buy high, sell even higher” approach to investing, so it is understandable why these firms are not jumping at the opportunity to provide capital to Peloton.

Hence, Peloton has faced difficulty in raising capital from institutional investors as it attempts a turnaround after its stock price plummeted once pandemic-related tailwinds faded. 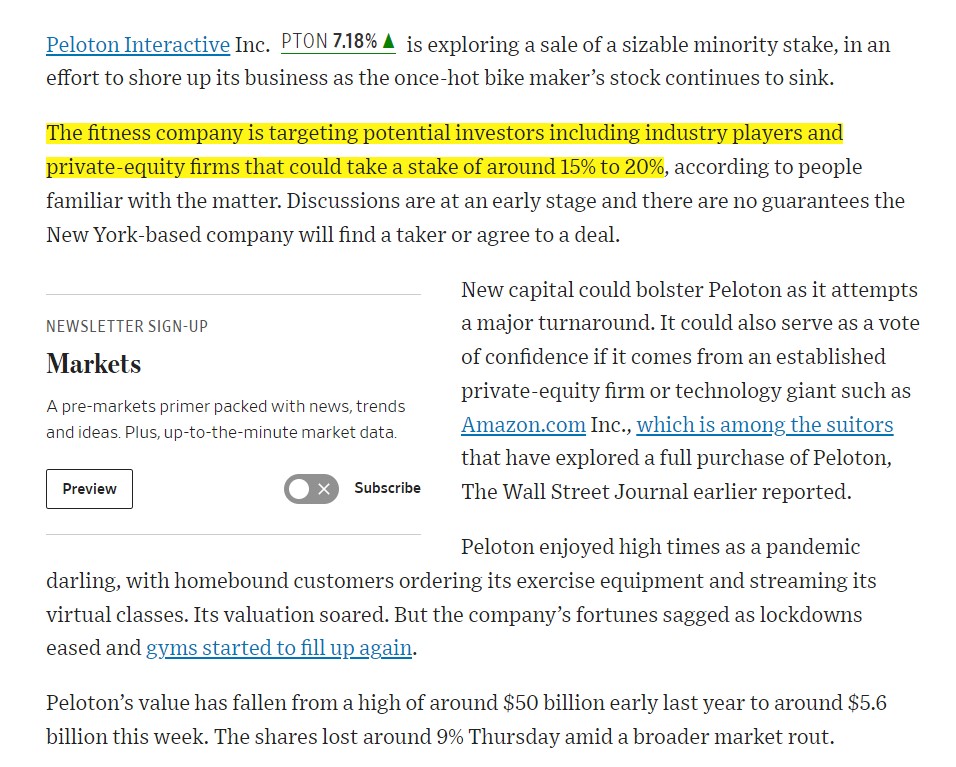