What is the First Chicago Method?

The First Chicago Method is a probability-weighted valuation of a company using different cases and a probability weight assigned to each case.

The First Chicago Method estimates the value of a company by taking the probability-weighted sum of three different valuation scenarios.

The method is most often used to value early-stage companies with unpredictable futures.

In practice, attempting to project the performance of high-growth companies in order to estimate the returns on an investment could prove to be difficult because of the wide range of possibilities.

Hence, the First Chicago Method is an approach to valuation in which different scenarios are probability-weighted.

The three different scenarios consist of the following:

The value attributable to each case is commonly obtained from two valuation approaches:

The estimated valuation will be different in each case due to the upward or downward adjustments to the underlying assumptions that impact the valuation.

The assumptions can differ in various ways, such as the discount rate, year-over-year (YoY) growth rates, comps used in determining the exit multiple, and more.

Base vs. Upside vs. Downside Case

The upside case and downside case are the two outcomes that are less to occur, with the latter usually being the lower likelihood of the two.

However, the reason is not that the worst-case scenario is less likely to happen, but rather that if the worst case has a higher likelihood of occurrence, it would not be worth considering an investment in the first place.

Depending on who is performing the analysis, additional cases with added contingencies could be added to the core three.

In venture investing, most investments are made with the expectation of failure, i.e. the “home runs” return the fund multiple times of their initial value and offset the losses incurred from the other failed investments.

In contrast, the base case represents the targeted performance (and returns) when integrating different cases into models for late-stage buyout investments and public equities markets.

Nevertheless, in the world of early to mid-stage investing (i.e. growth equity), the goal would be to exceed the base case.

Once the three cases are listed in a table, two other columns will be presented to the right.

While it should go without saying, it is still recommended to confirm that the sum of all probability weights equals 100%.

Moreover, the probability weights assigned to the upside and downside cases are usually similar.

Once the table is all set, the final step is to multiply the probability of each case by the respective valuation amount, with the sum of all the values representing the concluded implied valuation.

Suppose we are valuing a growth stage company using the First Chicago Method, with the DCF model using already completed – each with a different set of assumptions.

The probability of each case was determined as the following:

Using the “SUMPRODUCT” Excel function, with the first array consisting of the probability weights while the second array consists of the valuations – we arrive at a weighted valuation of $125 million. 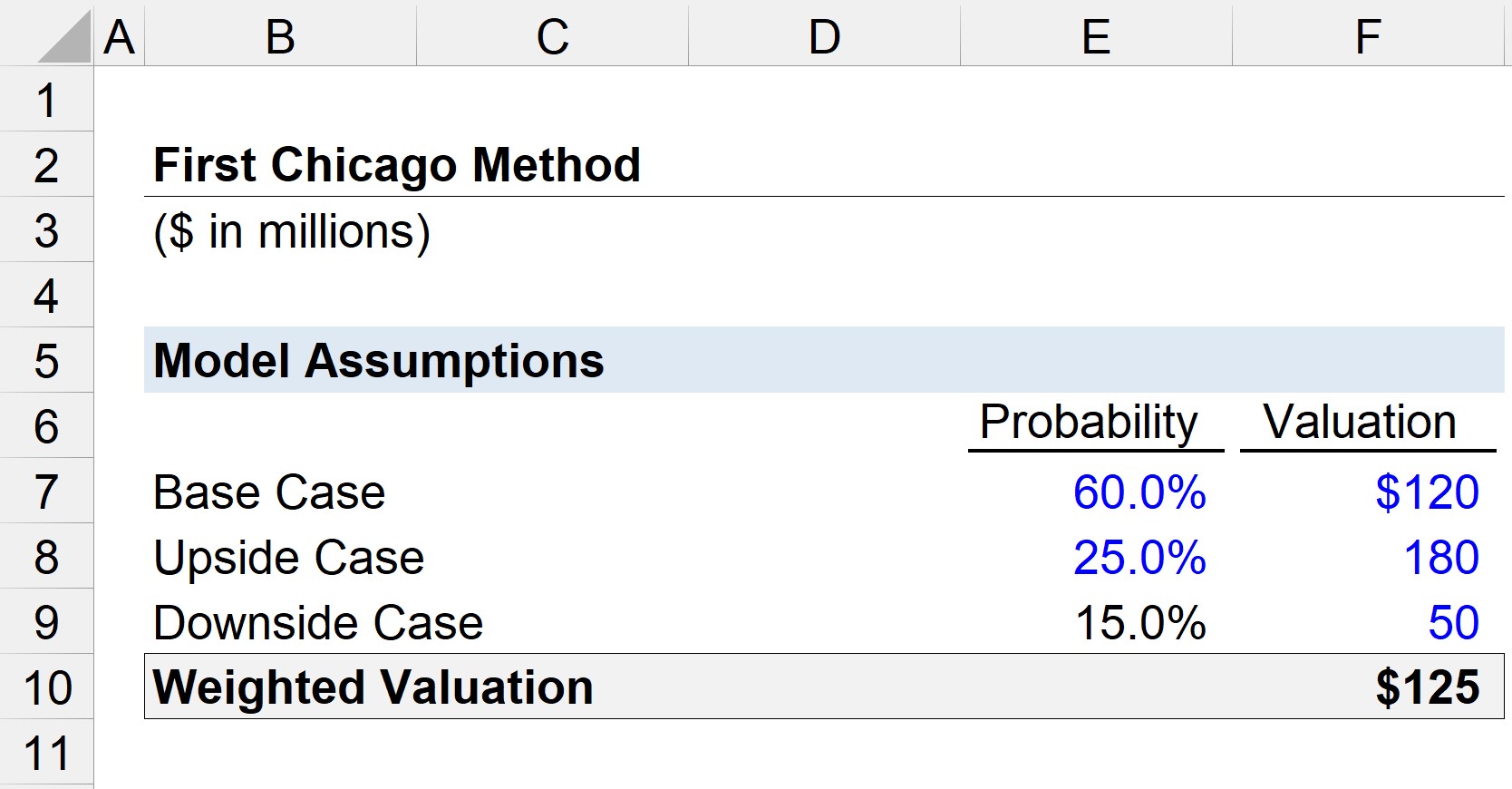