What is a Bank Run?

A Bank Run occurs when customers start to collectively withdraw their funds from banks under the belief that the bank is at risk of becoming insolvent.

The catalyst preceding a bank run is usually tied to a growing mistrust in a country’s monetary and banking system among customers.

If enough clients of a bank withdraw their deposits — in the worst-case scenario — the bank would likely collapse into default and cease its operations, i.e. the bank is now effectively depleted of funds.

The economic conditions in the country are usually bleak when a bank run occurs, with consumer spending and re-investments by corporates noticeably declining, resulting in less overall production (i.e. economic output) and higher rates of unemployment.

The general process of a bank run is as follows:

How to Prevent Bank Runs

In order to reduce the probability of such occurrences where the banks cease to function from insufficient liquidity, the Federal Deposit Insurance Corporation (FDIC) was formally established by Congress under the 1933 Banking Act (Glass-Steagall) to assure consumers about the safety of their funds and stabilize the economy.

Bank runs are a significant threat to the stability of a country, so protection from bank losses (and ensuring consumers trust financial institutions) are paramount to a functioning society.

Yet certain consumers may still opt to remove their funds from banks due to mistrust in the system, so the risk of a potential occurrence is never completely out of the picture.

Part of the reason why bank runs can be very concerning is that most banks do not hold the entirety of their customer deposits on-site. In fact, only a relatively small proportion of the total customer deposits can be physically kept within the bank because of federal regulations.

Following the invasion of Ukraine by Russia, the ruble dropped dramatically in reaction to the news of sanctions levied on Moscow by the EU and the U.S.

The Russia-Ukraine war and the subsequent international sanctions triggered the ongoing bank run in Russia.

However, the unique aspect of this particular example is that it essentially represents mistrust in the central bank of Russia itself, rather than the banks.

Hence, there has been much interest in the country around cryptocurrencies (i.e. digital currencies as a store of value).

So instead of mistrust in the banking system, the concern among consumers in Russia is directed at the government, which is arguably far more difficult to recover from with broader societal implications.

“Lines at ATMs snaked down sidewalks and around buildings in Moscow and at Russian banks in Europe as depositors rushed to withdraw cash. Sberbank Europe, which is owned by Russia’s state-run Sberbank, says it has experienced significant outflows of deposits in a very short time.” 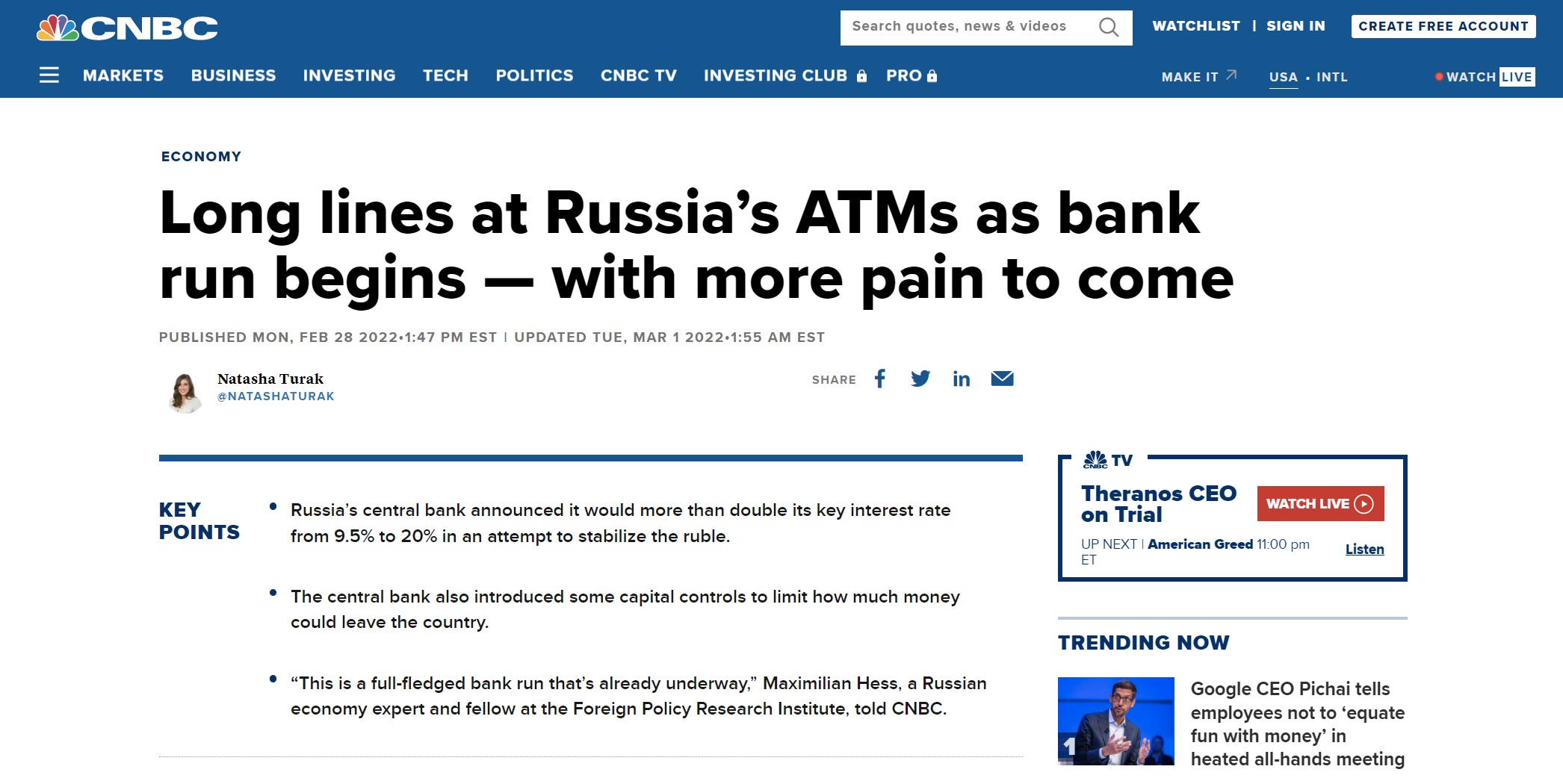