Guide to Understanding the Balance of Trade ("Trade Balance")

What is Balance of Trade?

Often used interchangeably with the term “trade balance”, the balance of trade is perceived to be favorable to a country’s economy if its export activities exceed that of its imports.

The balance of trade, or trade balance, represents the difference between a country’s exports and imports.

Based on the computed difference, a country can be determined to be in a state of either a trade surplus or a trade deficit.

Hypothetically, if we assume a marketplace where all participants are “rational” and sellers are driven by profit maximization above all else, the sellers in the market would seek to sell more of their goods and services than the amount purchased for consumption. Sellers can thus generate more sales along with higher profit margins from reduced spending.

But for sellers in an “irrational” market economy – in which maximizing profits is not the priority of market participants – close to all profits kept from their sales could be used to purchase goods and services from other sellers. In effect, the seller might be in a less favorable position because its spending exceeds its sales, resulting in reduced profit margins and less free cash flows (FCFs).

Balance of Trade = Value of Exports – Value of Imports

For example, imagine a country’s exports in the past month were $200 million while its imports were $240 million.

The difference between the country’s exports and imports is -$40 million (a negative integer).

Since the trade balance is negative, the country is categorized as having a trade deficit (or a $40 million deficit, to be more precise).

The difference between a trade deficit and a trade surplus is briefly summarized below.

Countries can find themselves in a trade deficit for a multitude of reasons, but the most common causes are the following:

The net positive inflows from engaging in more exporting than importing can stimulate the economy and increase overall economic activity, especially if those conditions remain relatively constant for numerous years.

Nevertheless, measuring a country’s trade balance is not sufficient to gauge the true health and financial state of a country’s economy. While valuable insights can certainly be derived from the analysis, it is crucial to understand the comprehensive macro-perspective of the trade balance measurement.

In order to see the whole picture and come up with a defensible viewpoint on the conditions (and future outlook) of a country’s economy, an economist must also track other economic indicators that take a broader macroeconomic and microeconomic perspective.

Suppose we’ve been tasked with calculating the trade balance of the U.S., specifically in the context of goods and services as part of international trade.

Using the data publicly released by the U.S. Census Bureau and the U.S. Bureau of Economic Analysis in early October 2022, we’ll start by entering the data points below into an Excel spreadsheet. 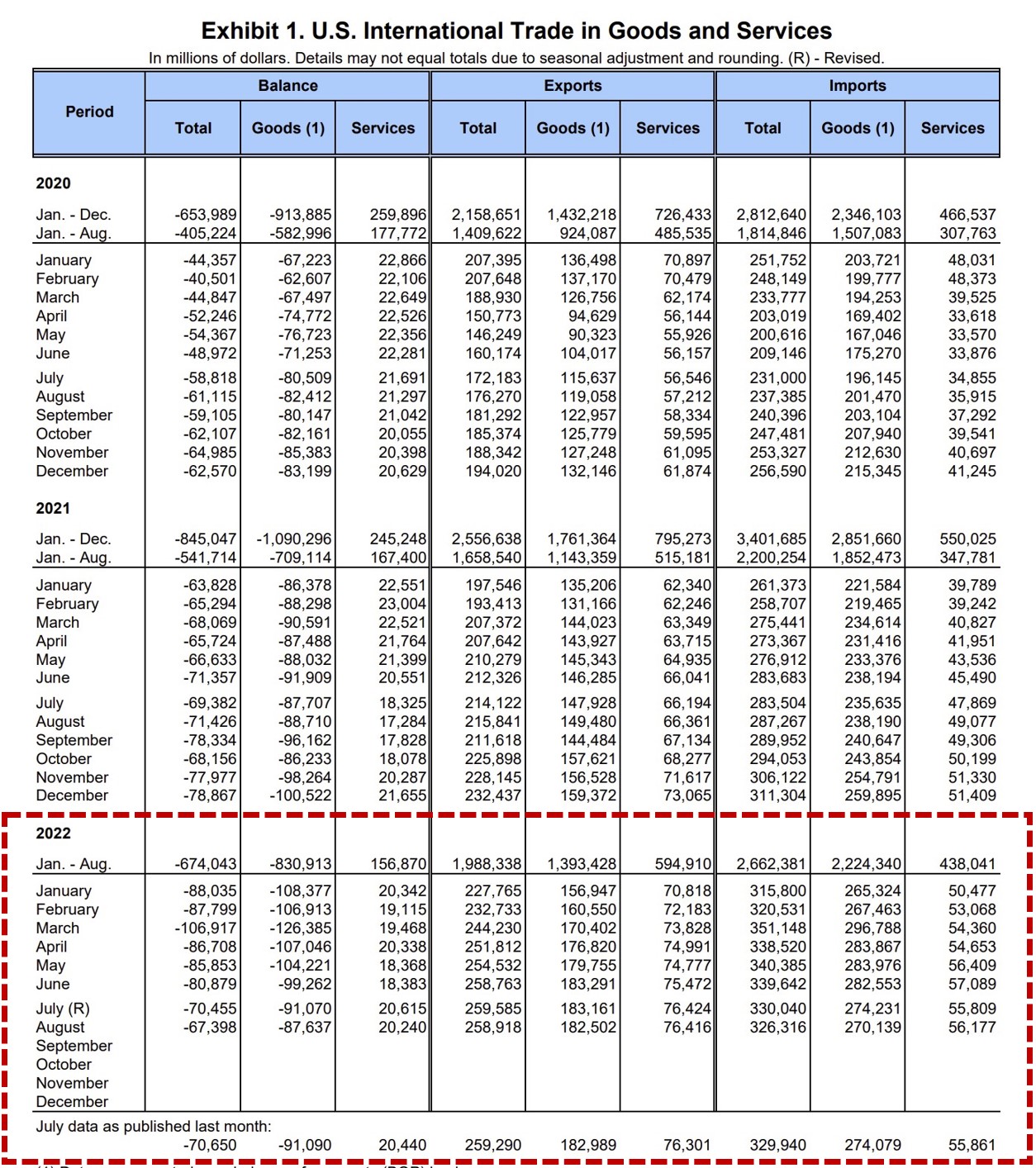 The far left column of the table lists the historical months from 2022 as of the present date, which ranges from January 2022 to August 2022.

The next two columns are “Exports” and “Imports”, and the final column on the far right is “Trade Balance”.

By subtracting the imports column from the exports column, we arrive at the trade balance for each month.

For instance, the reported U.S. trade deficit in August 2022 was $67.4 billion, confirming our calculations are correct (or at least in the same ballpark as the actual economic data).

The final step in our modeling exercise is to calculate the sum of the exports and imports columns and to subtract the two figures, resulting in a trade deficit of appropriately $674 billion. 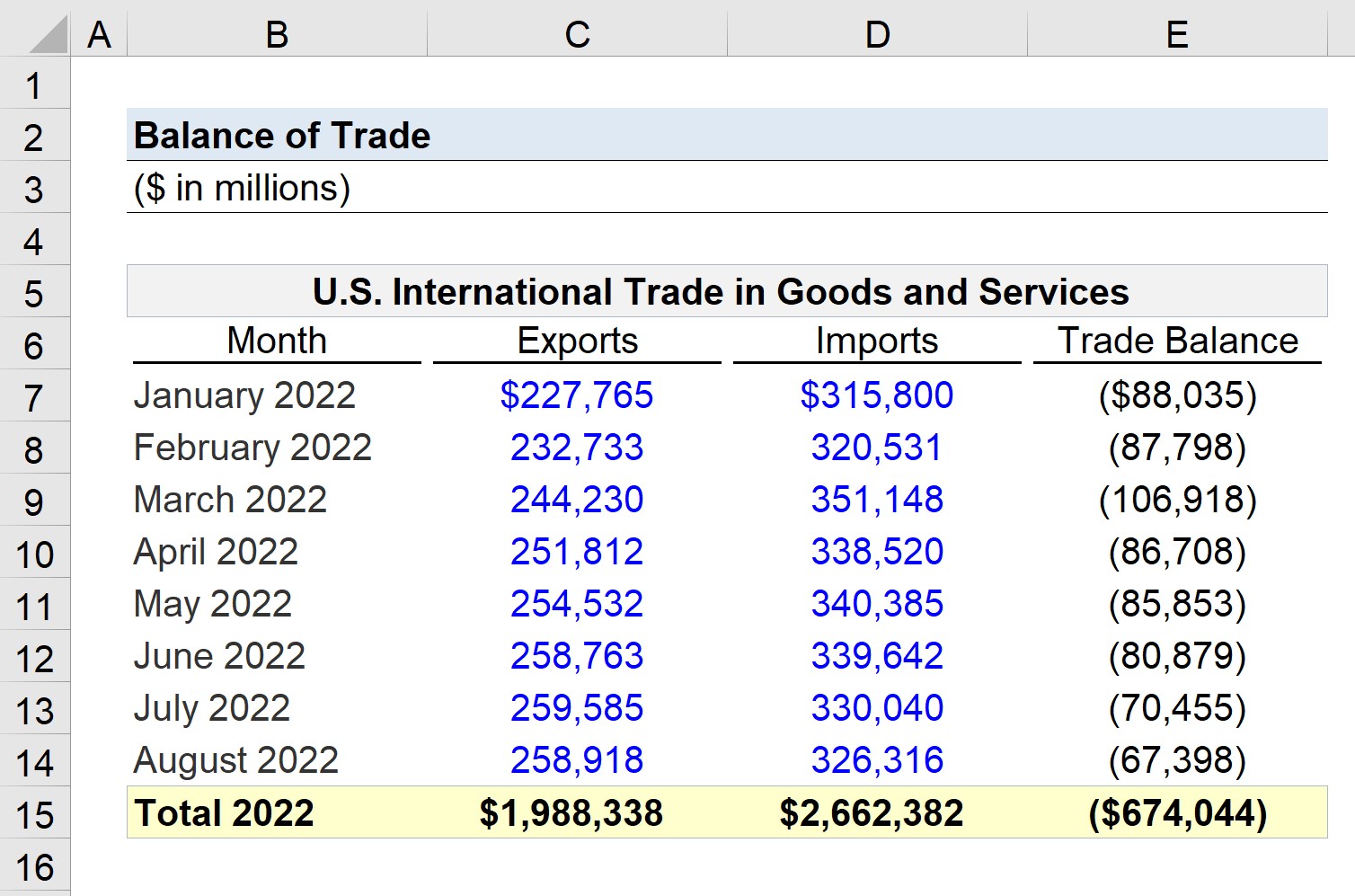 U.S. Trade Deficit with China – Is the Deficit a Problem?

The act of evaluating the state of a country’s economy in itself is a rather complex topic, to say the least, as we can see in the case of the U.S.

The U.S. economy is widely considered to be the strongest in terms of gross domestic product (GDP) and total economic output. The GDP is an economic indicator used to measure the total value of finished goods and services created within a country’s borders.

However, the race between the U.S. and China has gradually become closer to the point that many expect China to overtake the U.S. in GDP within the next couple of years, especially considering the rapid pace of growth at which China was growing (i.e. the pre-pandemic slowdown that disrupted the global economy).

In spite of the strength of the U.S. economy, the U.S. has effectively been in a trade deficit for almost the entire time since the end of World War II (i.e. the 1970s).

The longstanding trade deficit of the U.S. economy reflects that the U.S. consumes more goods and services from abroad than it exports to other countries.

In fact, the U.S. set the record for the largest trade deficit in April 2022 by reporting a deficit of $112.7 billion.

Unlike the U.S. and its trade deficit, China usually sits comfortably at a trade surplus by a substantial margin. But a trade surplus is not necessarily a sign that a country’s economy is healthy, as demonstrated by the economy of Japan.

The truth is likely somewhere in the middle of the trade deficit debate. While a trade deficit is not inherently positive or negative, the market forces at play and the economic context in terms of the country’s prevailing conditions are what determine the severity of any negative consequences of a long-term trade deficit.