Hyperinflation occurs in a country’s economy when the prices of goods and services rise in excess of 50% per month.

In economics, the term “hyperinflation” is defined as a period in which the prices of all goods and services in a particular country rise dramatically.

If a country’s economy is in a state of hyperinflation, the central government (or the applicable governing party) has essentially lost control of the economy’s rate of inflation.

The cause of hyperinflation is a disproportionate rise in the money supply that far exceeds the expectations of consumers, companies, economists, and the government.

The significant uptick in the money supply, when not supported by enough growth in the economy, can cause seemingly exponential growth in inflation.

Hyperinflation is frequently preceded by the central government printing a substantial amount of money in an attempt to increase the current level of economic activity.

The drawback to the government flooding the economy with cash is that the sudden increase in the amount of money in circulation results in the country’s currency declining in value, and thus causing a rise in the price of goods and services.

Usually, these negative consequences of the central government printing more money are not apparent to everyday consumers until the printing is either gradually pulled back or halted.

Causes and Consequences of Hyperinflation (Step-by-Step)

If hyperinflation is present in a country’s economy, one notable change in consumer behavior is the increased hoarding of goods, i.e. stockpiling of everyday essentials.

When the outlook on the economy is negative, consumers expectedly increase their near-term spending to accumulate required goods in anticipation of a long-term decline in overall spending (and a major economic collapse).

The long-term consequences of hyperinflation are more expensive pricing of goods, more closures of businesses, and scarcity in daily goods as the government struggles to fix the collapsing economy.

Often, consumers will lose their life savings from currency devaluation, where the country’s currency of exchange loses a significant percentage of its original value.

In addition, banks and other institutional lenders will end up in bankruptcy from the value of their loans becoming near worthless, reducing the amount of credit available in the country and the amount of money in circulation.

To make matters even worse, consumers eventually will stop depositing their money at financial institutions, placing even more downward pressure on banks and lenders.

A country’s currency during a period of hyperinflation plummets in value, particularly overseas in foreign markets, and domestic importers also produce less revenue (and profits) as the cost of foreign goods becomes too high for their business models to be sustainable.

From the perspective of foreign countries, the collapsing value of the country’s currency makes exports more affordable — but these beneficial savings are at the expense of the country experiencing hyperinflation.

Hyperinflation is characterized by increased prices, a devalued currency, more bankruptcies, less purchasing power among consumers, and shortages in goods like food.

Inflation vs. Hyperinflation: What is the Difference?

Inflation describes periods when the prices of goods and services rise, resulting in less consumer spending and a reduction in purchasing power.

In contrast, hyperinflation describes a time of “extreme” inflation that was not managed effectively by the central government and is now deemed excessive and uncontrollable.

Hyperinflation Risk in the U.S. Economy

Most economists define hyperinflation as when inflation is at a rate of more than 50% per month. The level of inflation observed in the U.S. in 2022 is nowhere near this threshold, i.e. the effects of hyperinflation are multitudes worse than “normal course” inflation.

In the U.S., the Federal Reserve aims to maintain an inflation rate of around 2% over the long term, although the latest reported figures have been closer to 8.5%.

The spike in the U.S. inflation rate was caused by the low-interest rate environment that lasted for decades, with rates lowered even further because of the COVID-19 pandemic in 2020.

But now that the economy is gradually recovering, the Fed is attempting to mitigate inflation risk by increasing interest rates and reducing spending (and we’ll see how these monetary policies pan out in the coming years).

A real-world example of a country suffering from hyperinflation is Venezuela, which initially began with double-digit inflation in the early 1980s after a span of socioeconomic and geopolitical conflict.

The issues that caused the rise in inflation in the first place continued to negatively affect the country’s economy even up to the present date, despite the claims by economists in the end of 2021 that Venezuela is technically no longer in a state of hyperinflation.

While Venezuela broke out of one of its longest streaks of hyperinflation in 2021 — i.e. the country’s inflation rate was reported to be sub-50% for the first time in quite a while — the economy is by no means recovered and stable today.

In fact, many consumers in the country still struggle to afford necessities such as food.

The payment infrastructure in Venezuela collapsed until somewhat recovering more recently when the central government made adjustments to the denomination of its currency and implemented a gradual reduction in the amount of money printing and government spending in order to cut the fiscal deficit more effectively.

Currently, more than half of the transactions completed in Venezuela are denoted in U.S. dollars, coinciding with the increased usage of digital apps such as Zelle and PayPal. 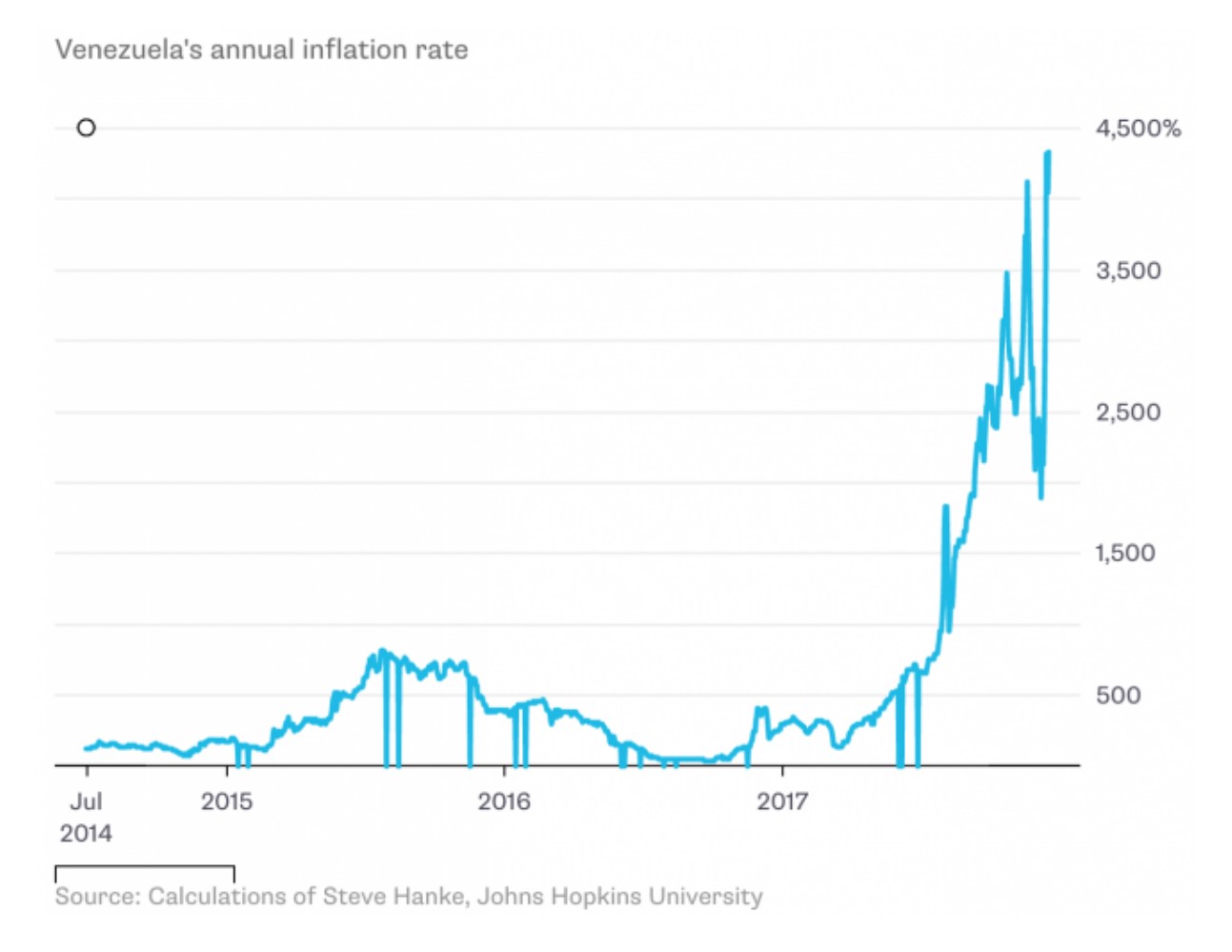