What is an Oligopoly?

An Oligopoly describes an economic structure wherein only a select few market participants compete with each other.

In an oligopoly, the competitive dynamics within the industry are distorted to favor only a limited number of influential sellers.

An oligopoly is defined as a market in which the industry is dominated by a small number of companies that are all influential players in the market.

There is no precise number of companies that qualifies a market as an oligopoly. But as a rough guideline, the number of sellers must exceed two and be less than about five.

The formation of an oligopoly stems from a limited number of companies possessing a substantial portion of the market coupled with stiff competition and high barriers to entry, resulting in a state of reduced competition over time.

A market characterized as an oligopoly consists of only a few competitors and the choices of each company directly impacts the decisions of the rest of the market participants.

Given those market conditions, it should be intuitive as to why the formation of an oligopoly can easily become corrupt (and the players be prone to collusion).

Characteristics of an Oligopoly

An oligopoly is characterized by only a handful of influential companies competing in a given market.

Furthermore, the number of market participants is low enough that the actions of one competitor is noticed by the rest, which can often set off a chain reaction.

Each company has the resources to actively influence the market, such as raising prices or intentionally restricting output to create an artificial shortage.

Yet the companies involved rarely want to make the first move, as they want to minimize unnecessary regulatory oversight and avoid accusations of unethical practices such as “price fixing” (when the prices are not set by the free market but by the efforts of those in influential positions).

In non-cooperative oligopolies, the competition can become intense because the companies – each being very influential – are essentially set off into a price war with one another.

In contrast, the concept of Nash equilibrium in game theory states that each participant in a non-cooperative market can optimize their outcome by maintaining their current strategy.

The state of Nash equilibrium is reached when the participants realize that nothing can be gained from changing their strategy, so it is in the best interests of all parties to avoid any strategy changes at all.

In an oligopoly, competition is among only a few companies, and there are two distinct forms of competition:

Regardless, important similarities include the absence of free market forces and a limited number of sellers in the market, where a few sellers dominate the market and dictate the prices of the good(s) in question.

In an oligopoly, while there are only a handful of companies in possession of significant market share in the market, no individual company exerts far more influence relative to the others.

The lack of a single company in control of the market is the differentiation between an oligopoly and a monopoly, wherein there is only one seller with outsized control over the entire market.

Compared to markets with perfect competition, oligopolistic markets are clearly more concentrated, but still not as much as in a monopoly.

An example of a modern oligopoly is the U.S. airline industry, where four carriers hold in excess of 2/3 of total market share.

The four carriers are:

Because each of these airlines’ market shares is relatively similar, they form an oligopoly rather than a monopoly. 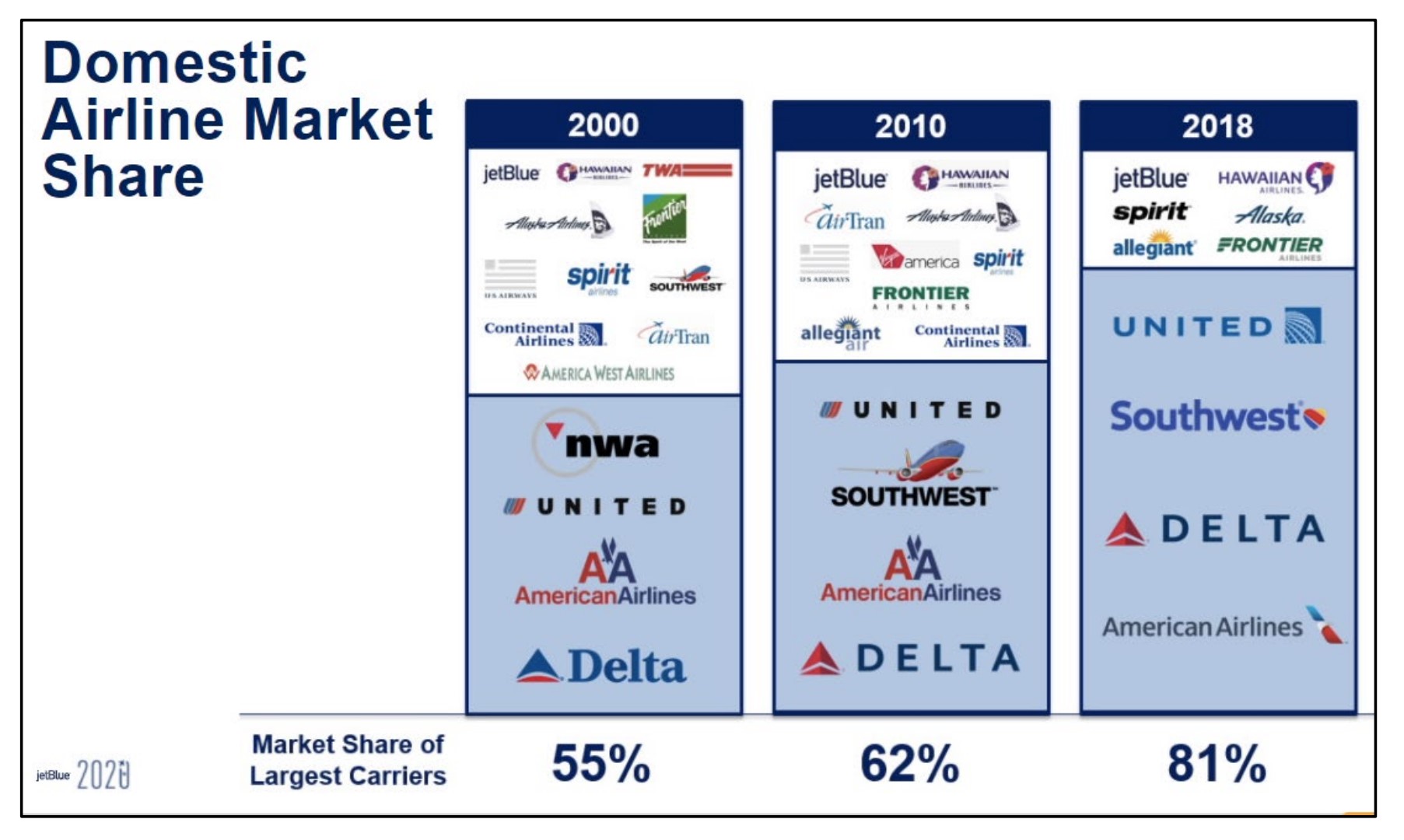 The reason for these market conditions is in part attributable to the capital-intensive nature of the airline industry, where the required amounts of capital expenditures to even enter the market are substantial.

These spending needs effectively function as a barrier to entry for other airlines that struggle to compete.

Further, the unit economics in the airline industry is well-known for being unfavorable – i.e. significant fuel and personnel costs coupled with seasonality and cyclicality result in unpredictable performance and razor-thin profit margins.

The U.S. government is well-aware of the oligopoly, as confirmed by the Department of Justice’s lawsuit to block a potential partnership agreement between American Airlines and JetBlue Airlines on the basis of antitrust laws.

American Airlines and JetBlue vs DOJ: How Big Can Airlines Get? (Source: Economics Review At NYU)