What is Nominal Interest Rate?

The Nominal Interest Rate reflects the stated cost of borrowing before adjusting for the effects of unexpected inflation.

The nominal interest rate is defined as the stated pricing on a financial instrument, which could be related to debt financing such as a loan or a yield-generating investment.

For the everyday consumer, the nominal interest rate is the price quoted on items such as credit cards, mortgages, and savings accounts offered by banks.

For instance, if new economic data is released that favors the borrower, the interest rate received by the lender is kept the same.

Higher-than-expected inflation can erode the yield earned by a lender because a dollar now is worth less than a dollar on the original date on which the financing arrangement was agreed upon.

In effect, the borrower (i.e. the debtor) tends to benefit from periods of high inflation at the expense of the lender (i.e. the creditor).

The formula for calculating the nominal interest rate is as follows.

Note that as a rough approximation, the following equation can be used with reasonable accuracy.

Nominal vs. Real Interest Rate: What is the Difference?

The interest rate on a financial instrument can be expressed in either nominal or real terms.

On the initial date of the agreement, both parties involves are likely aware of the potential for inflation over time.

The terms are negotiated and structured with that particular risk in mind.

Since the future rate of inflation in a country cannot be determined exactly, the terms are based on projected inflation, which neither party can know with complete certainty.

The differential between the nominal and real interest rate is thus the “excess” over the expected rate of inflation.

Suppose a corporation decided to raise capital in the form of bonds from an institutional lender.

Given the corporation’s credit rating profile and the current market sentiment regarding inflation, the lender must decide the interest rate to charge the borrower.

On the date of the financing arrangement, the expected inflation rate as determined by the lender is 2.50%, and the lender’s minimum target yield (i.e. the real interest rate) is 6.00%.

Using the assumptions outlined above, we’ll enter those into our formula for calculating the nominal interest rate.

Therefore, given the expected inflation rate of 2.50% and the estimated real rate of 6.00%, the implied nominal rate is 8.65%, which is the institutional lender’s minimum target yield.

In the final part of our exercise, we’ll assume the actual inflation rate was substantially higher than the anticipated rate of the lender.

The lender had originally expected inflation to be near 2.50% on the date of the financing, but the actual rate of inflation came out to 7.00% instead.

In closing, the lender missed their target yield by a substantial margin due to the sudden spike in inflation. 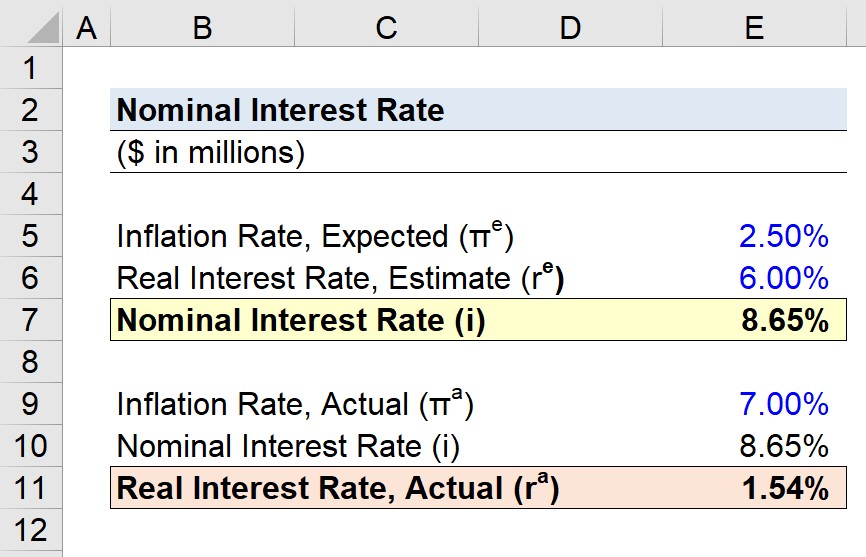