What is the Occupancy Rate?

The Occupancy Rate represents the ratio of occupied to total rental units. The formula for calculating the occupancy rate divides the number of occupied rooms by the total number of available rooms.

How to Calculate Occupancy Rate

In particular, the occupancy rate is a key performance indicator (KPI) within the hospitality sector, namely hotels, since the metric quantifies the proportion of a rental property that is actually being utilized.

Common examples of industries wherein occupancy is an important determinant of revenue are as follows.

Since an unoccupied rental unit such as a hotel room generates no revenue, a hotel strives to achieve as high of occupancy as possible.

The closer that a hotel’s occupancy is near 100% — i.e. the full utilization of all available rental units — the closer the hotel is to reaching its full revenue capacity, all else being equal.

But higher occupancy does not necessarily always translate into higher revenue because other factors such as the average daily rate (ADR) and the revenue per available room must also be considered.

For instance, a hotel with 85% occupancy could bring in more revenue than a competitor with 100% occupancy if the former were to charge sufficiently higher pricing.

Simply put, a hotel with above-market pricing will have a business model that reduces its reliance on near-full capacity occupancy to reach its target revenue.

In order to maximize revenue generation, the trade-off between pricing and occupancy must be understood by hotel owners and renters when setting prices.

The formula for calculating the occupancy at a hotel is as follows.

For example, if a hotel with 100 available rooms currently has 85 rooms booked, the occupancy is 85% on the given day.

The inverse of the occupancy rate is the vacancy rate, which is the percentage of empty, vacated rooms.

Suppose a hotel has a total of 250 rooms available for customers to book.

On this particular date, the number of occupied rooms is 225, so only 25 rooms are vacant.

Given these assumptions, the occupancy is 90% on this specific day, which we calculated by dividing the number of occupied rooms by the total available rooms.

In conclusion, we can also back-solve the vacancy rate by subtracting the hotel’s occupancy from one. 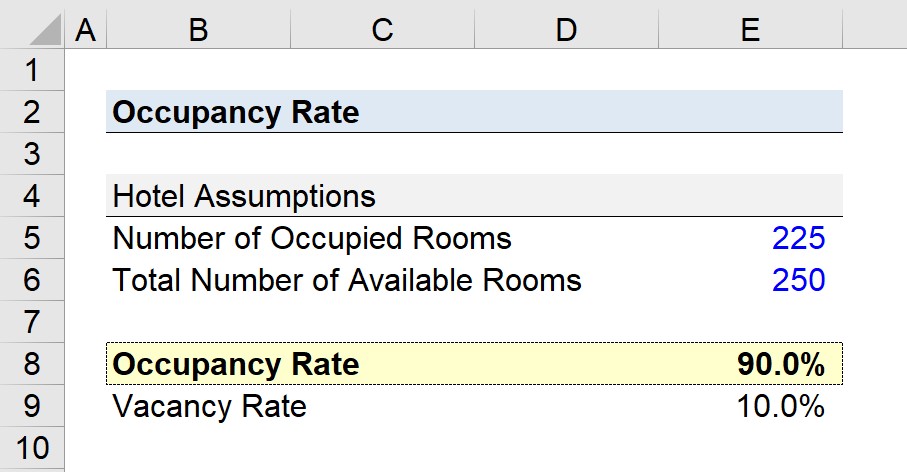