EBITDA, an abbreviation for “earnings before interest, taxes, depreciation and amortization”, is a non-GAAP proxy for a company’s normalized, pre-tax operating cash flows.

Conceptually, EBITDA represents the normalized core earnings of a company and neglects the effects of financing items (e.g. interest expense) and taxes.

What Does EBITDA Stand For?

EBITDA, or “Earnings Before Interest, Taxes, Depreciation and Amortization”, is arguably the most important profit metric in finance.

Conceptually, EBITDA measures the operating performance of a company, in the particular context of its core operations generating consistent, recurring cash flows.

Stated in simple terms, the profit metric’s objective is to provide enhanced transparency into a company’s operating performance, with such non-GAAP measures presented as supplementary material.

The practice of companies disclosing non-GAAP earnings to offer more insight into their recent operational performance and financial position has become rather common in recent times.

How to Calculate EBITDA (Step-by-Step)

Since the objective of the non-GAAP metric is to provide a “normalized” view of financial performance, the outcome should, at least in theory, result in more accurate projections.

The simplest method of computing EBITDA consists of adding depreciation and amortization (D&A) – the two most prevalent non-cash items – to a company’s operating income (EBIT).

EBITDA excludes non-cash expenses, namely depreciation and amortization, as the recognition of those items on the income statement is related to the accrual accounting reporting standards established under U.S. GAAP.

The term “D&A” stands for “depreciation and amortization”, respectively, and each represent a non-cash add-back on the statement of cash flows.

Since EBITDA is a non-GAAP measure, there is no consistent set of rules dictating the specific items that belong in the metric.

However, the most common formulas used to calculate the EBITDA metric are as follows.

The term “normalized operating expenses” refers to a company’s operating expenses, such as selling, general and administrative (SG&A) costs and research and development (R&D), but excludes non-cash expenses like depreciation and amortization (D&A).

If the starting point is net income, i.e. the “bottom line” of the income statement, the steps to calculate EBITDA would involve adding interest, taxes, and non-cash items.

The widespread usage of the metric is largely due to the metric being capital structure independent and unaffected by differences in taxes, which is jurisdiction-dependent and can be skewed by items such as net operating losses (NOLs).

Before we delve further into the EBITDA metric and our practice exercise tutorial in Excel, ensure each component in the formula is truly understood by reviewing the following table.

The process of calculating EBITDA, however, can become more intricate due to the treatment of items such as stock-based compensation (SBC), with the resulting figure termed “Adjusted EBITDA”.

The add-backs to determine a company’s adjusted EBITDA are discretionary, and some examples of such non-recurring adjustments include the following:

The treatment of stock-based compensation (SBC) – a non-cash item that creates additional dilution – is a rather complex subject discussed in more detail in the following post → Stock-Based Compensation in DCFs.

For a real-world example of a GAAP to non-GAAP reconciliation, see the adjustments by Twitter, Inc. (TWTR) in its most recent reporting period (Q-2, 2022) prior to its take-private transaction. 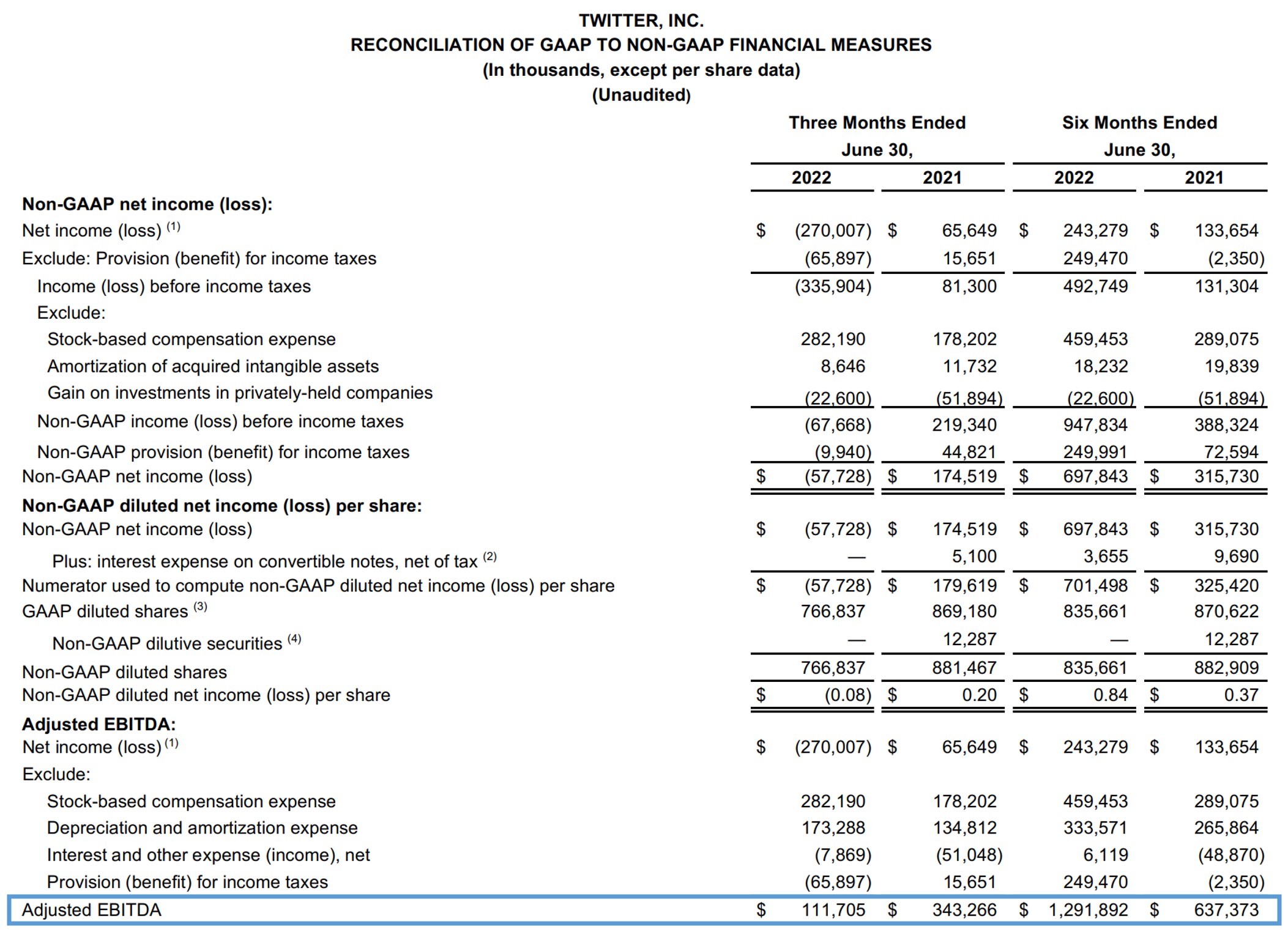 Pros and Cons of EBITDA

EBITDA, in spite of all the criticism, is still widely used because of the ease of calculating the metic (i.e. ”back of the envelope”).

In practice, usage of the EBITDA profit measure is particularly common in corporate valuation and mergers and acquisitions (M&A).

Since EBITDA removes the impact of one-time, extraordinary items and is considered a capital-structure neutral metric, comparisons among different companies are easier, i.e. closer to being “apples-to-apples”.

What is a Good EBITDA?

The EBITDA profit metric by itself, i.e. as a standalone metric, does not offer much insight into neither how much a business is worth nor its recent financial performance.

But a company’s EBITDA can be divided by its revenue in the corresponding period to arrive at the EBITDA margin, which is a standardized measure of profitability widely used across a broad range of industries.

The EBITDA margin answers the following question, “For each dollar of revenue generated, what percentage of it trickles down to EBITDA?”

The ratio between EBITDA and revenue, expressed as a percentage, can determine a company’s operational efficiency and capacity to produce sustainable profits over the long run.

Therefore, there is no “good” EBITDA value, per se, without adequate context such as the specific industry that the company operates, the market size of the industry (i.e. potential revenue opportunity) and the company’s current placement in its overall lifecycle, at the very least.

But even if all of those information and data points mentioned were collected, the norm is to avoid making direct comparisons of gross figures without standardizing the metric, i.e. the reliance on the EBITDA margin is the recommended approach, which is practically abided by the entire finance industry.

Forming an opinion on the discretionary adjustments to EBITDA not only reduces the risk of inflating the metric but also improves the forecasting of EBITDA.

There are two methods in which EBITDA can be forecasted:

EBIT, or “operating income”, is an accrual-accounting-based GAAP profit measure, whereas EBITDA is a non-GAAP, hybrid profit metric.

In certain scenarios, the difference between the two will be marginal, whereas the difference can be “night and day” in other cases (i.e. capital-intensive companies with significant D&A).

Suppose a company generated $100 million in revenue for its latest fiscal year, 2021.

By subtracting COGS from revenue, we can calculate our company’s gross profit.

The next profit metric to calculate is EBIT, which is equal to gross profit minus operating expenses, i.e. the SG&A and R&D expenses in our scenario.

If the interest expense is deducted from EBIT, we are left with earnings before taxes (EBIT), otherwise known as the pre-tax income.

Only one step is left before we reach our company’s net income, which is calculated by subtracting taxes from EBT.

Here, we’ll assume a tax rate of 20% and multiply that by our EBT, which comes out to $8 million in taxes

After subtracting the tax expense from EBT, we conclude that the net income of our company is $32 million.

Using the operating assumptions from the earlier, our completed income statement is shown here.

Following the industry-standard formatting conventions reduce the chance of a mistake substantially and make financial models easier to audit.

Our next section is comprised of two parts, where we’ll calculate the EBITDA of our hypothetical company using the income statement built in the previous section.

But before we can calculate the metric, we’re missing one key assumption: the depreciation and amortization (D&A) expense.

If we assume the D&A expense recorded in 2021 is $5 million, what is the EBITDA of our hypothetical company?

Under the “top-down” approach, we’ll start by linking to EBIT from our income statement and adding back the $5 million in D&A, which equals $50 million in EBITDA.

By dividing our company’s EBITDA by revenue, the EBITDA margin is 50%.

In contrast, the “bottom-up” approach starts with net income, i.e. the profit metric inclusive of all operating and non-operating expenses found at the bottom of the income statement.

From net income, we’ll add back taxes, interest expense, and D&A to arrive at an implied EBITDA of $50 million (and a margin of 50%), which confirms our prior calculation is, in fact, correct. 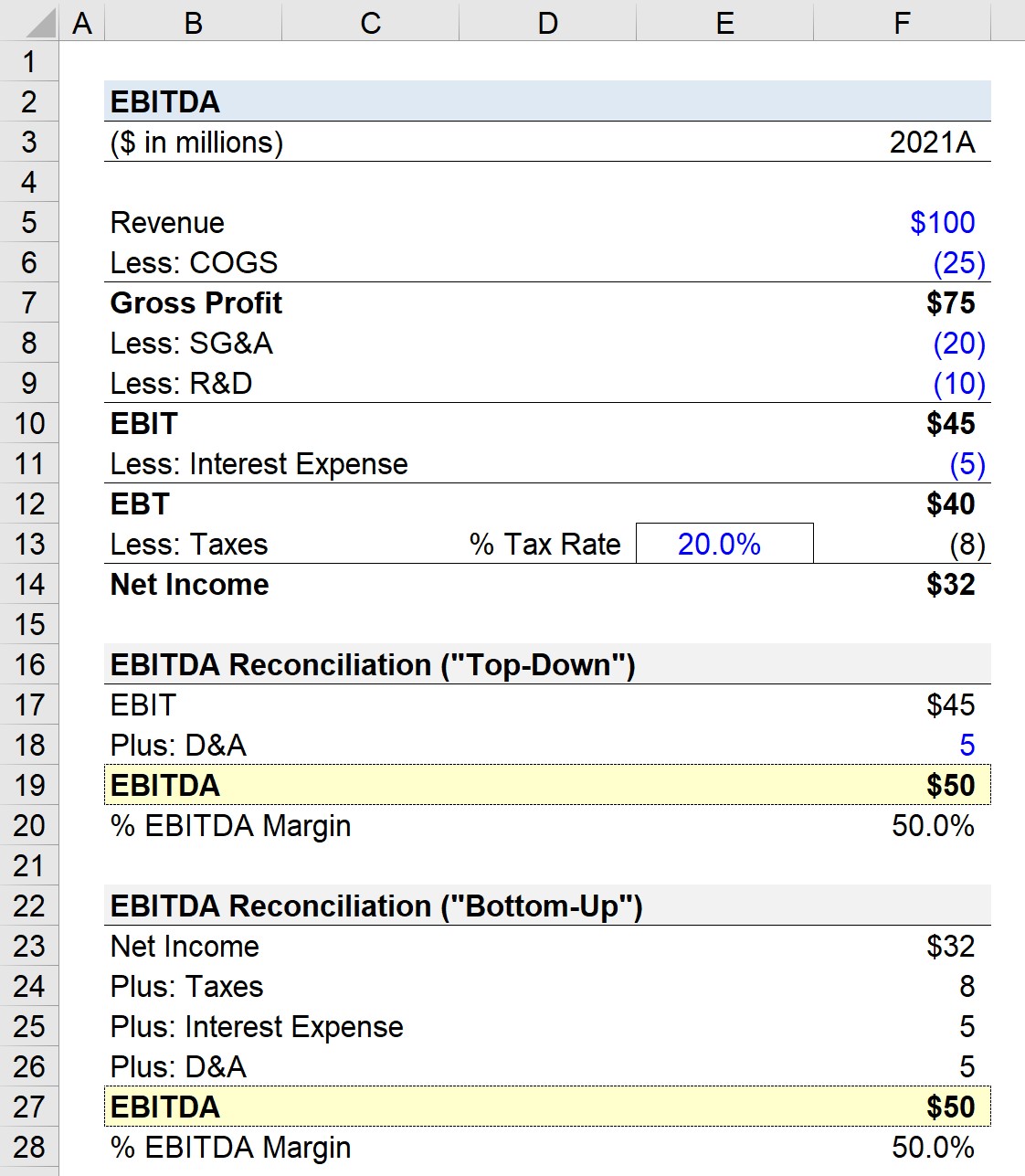