What are Basis Points?

Basis Points (BPS) represent a unit of measurement for interest rates in finance and are equal to 1/100th of 1.0%. The term “basis points” is most often used when discussing the interest rate environment such as the Fed or in reference to bonds and fixed-income securities.

How to Calculate Basis Points (Step-by-Step)

One basis point equals one-hundredth of a percentage point, or expressed numerically, 1/100th of 1.0%.

Within the finance industry, it is the norm to discuss interest rates in terms of basis points rather than percentages, especially regarding smaller figures. Using bps can be more convenient and reduce the chance of misinterpretations, as the expression is an absolute figure and is thus easier to understand than a small percentage.

Describing interest rates, spreads and yields in terms of basis points tends to be more precise, as the implications of such minor changes can often be significant on the economy or instrument in question.

Basis points, or “bps”, are pronounced as “bips” and are relevant when speaking about a wide variety of financial instruments such as government bonds (e.g. treasury bonds, treasury bills), corporate bonds, and common shares.

While 1/100th of 1.0% might initially sound like a minuscule difference, the economic implications and impact on yields can be substantial. For example, interest rate adjustments by the central government (i.e. the Fed in the U.S.), even by one mere basis point, could have a substantial wave of effects on the bond and equities market, contrary to what some might anticipate.

How to Convert Basis Points to Percentage (%)

In practice, the bps metric is frequently used to signify the percentage changes or yield spreads in financial instruments such as fixed income, particularly in instances wherein the difference in the interest rate is sub-one percent (<1.0%).

To reiterate from the earlier section, 100 bps equals 1.0%. Therefore, in order to convert the number of bps to a percentage figure, the bps must be divided by 100, as shown in the equation below.

In contrast, converting a percentage into bps — the far more common calculation — involves multiplying the percentage rate by 100.

By expressing the percentage in the form of basis points, the incremental changes, such as the spread on bond yields, are easier to discuss, and the probability of misinterpretation is reduced.

So in order to move from bps to percentages, we divide by 100, and to switch from percentages to bps, we must multiply by 100.

Suppose we are tasked with manually building a table that converts percentages (%) to basis points (bps), similar to the above.

As we went over earlier, in order to move from percentage form to bps, we multiply the percentage on the left column by 100%, i.e. 10,000.

We’re moving the decimal in the percentage to the right by two places, but we must be careful not to multiply by 100% or 1, as the resulting amount will be equal to the percentage.

Conversely, we could also divide the left column by 0.01% to arrive at the same figures.

While less intuitive on paper, the latter method is arguably more convenient in Excel because there is less chance of an error related to the sign convention.

We’ll wrap up our quick exercise by confirming that 100 bps equals 1.0%.

In closing, a screenshot of the completed model can be found below. 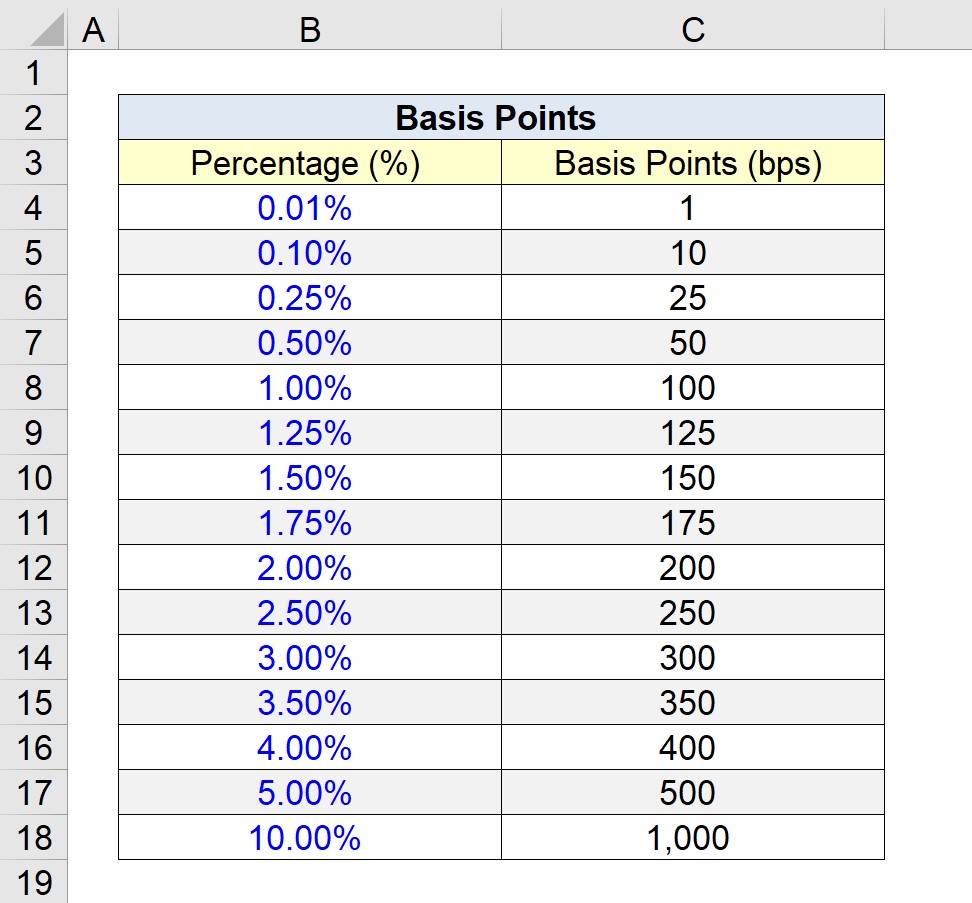