Guide to Understanding the Markup Percentage

What is the Markup Percentage?

The Markup Percentage represents the excess average selling price (ASP) per unit over the cost per unit.

In order for a good or service to be profitable, companies must set prices appropriately so that revenue covers the associated costs related to inventory purchases, manufacturing, packaging material, etc.

How to Calculate the Markup Percentage

The markup price is the difference between the average selling price (ASP) of a product and the corresponding unit cost, i.e. the cost of production on a per-unit basis.

In practice, the markup price is typically calculated for internal uses and to help set prices.

All companies, irrespective of the industry they operate within, must eventually turn a profit in order to be able to sustain operations, meaning overhead costs and other operating expenses must all be covered sufficiently by revenue.

Further, one of the most influential decisions on a company’s profit margins is the pricing of its products/services.

But as a standalone metric, the markup price does not provide much insight, which is where the markup percentage comes in.

Given a markup price, calculating the markup percentage is a relatively straightforward process.

The formula for calculating the markup percentage is as follows.

Suppose a retail store sells its products for an average selling price (ASP) of $100.00 each.

The unit costs associated with the production are $80.00 per product.

Upon subtracting the unit cost from the average selling price (ASP), we arrive at a markup price of $20.00 per unit.

From the calculation above, we can see that the excess charged above the unit cost if $20.00.

Hypothetically, let’s say that the retail store from the prior section sold 100,000 units in one month.

In this case, the company’s product revenue was $10 million while its cost of goods sold (COGS) was $8 million.

For illustrative purposes, we’ll ignore any non-production-related expense that could be embedded within COGS and focus solely on the products sold (and their markup).

The gross profit equals $2 million, which we calculated by subtracting the COGS from the product revenue (and the gross margin is thus 20%).

Using an alternative approach, the markup percentage can be calculated by taking the gross profit and dividing it by the cost of goods sold (COGS).

The markup percentage of 25% confirms our calculation from earlier was correct. 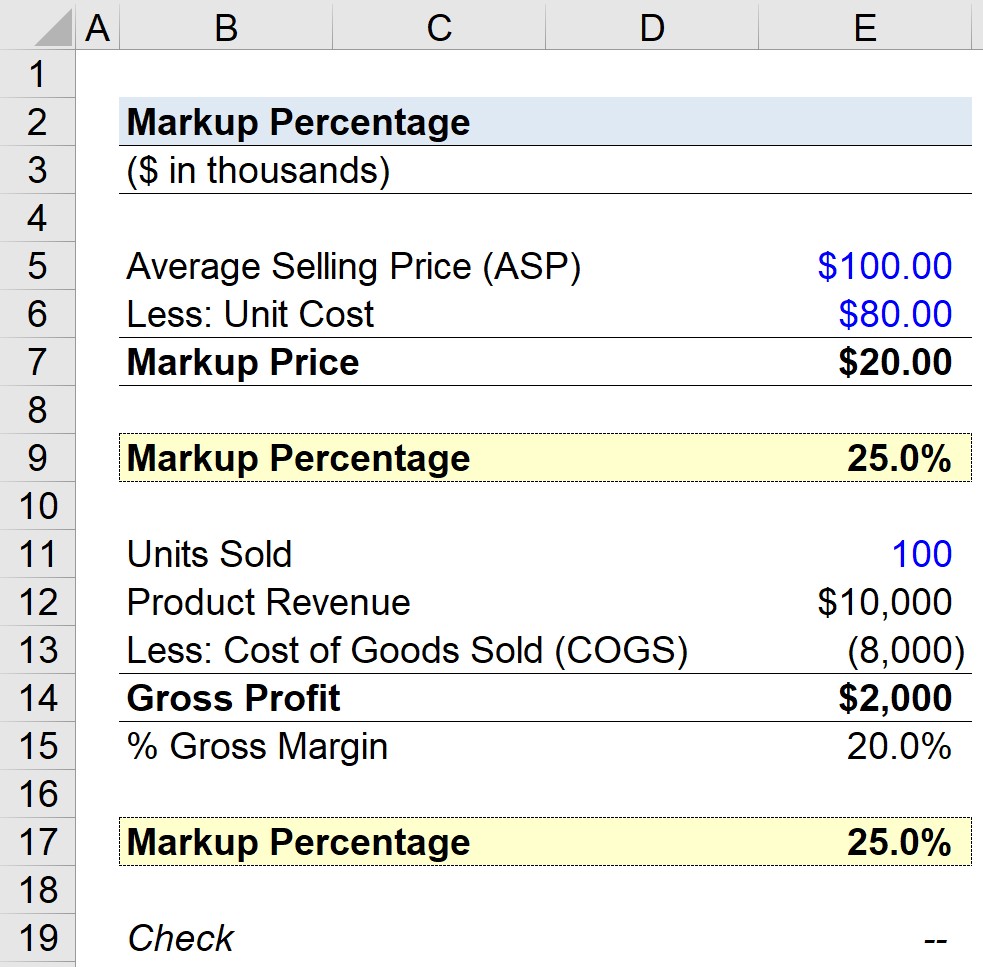