What is an Out-of-Court Restructuring?

Upon filing for Chapter 11, the Court offers a range of features to contribute towards the debtor in being able to create a viable reorganization plan and achieve a turnaround.

But in either case, a Chapter 7 liquidation was deemed unnecessary for the time being, which is an achievement in itself.

The assumption implied in both an out-of-court and in-court restructuring is that a turnaround can be achieved, as long as the right strategic decisions are made and the prepetition capital structure is normalized to become appropriately suited for the company’s financial profile.

Considering the company is either in a state of financial distress or on the verge of defaulting on its debt obligations (and at risk of foreclosure due to a breached covenant, missed interest, or principal repayment), reorganization becomes paramount to restore the financial health of the troubled company to a normalized state.

Before we begin, the table below outlines the key advantages and disadvantages of coming to a resolution out-of-court vs in-court: 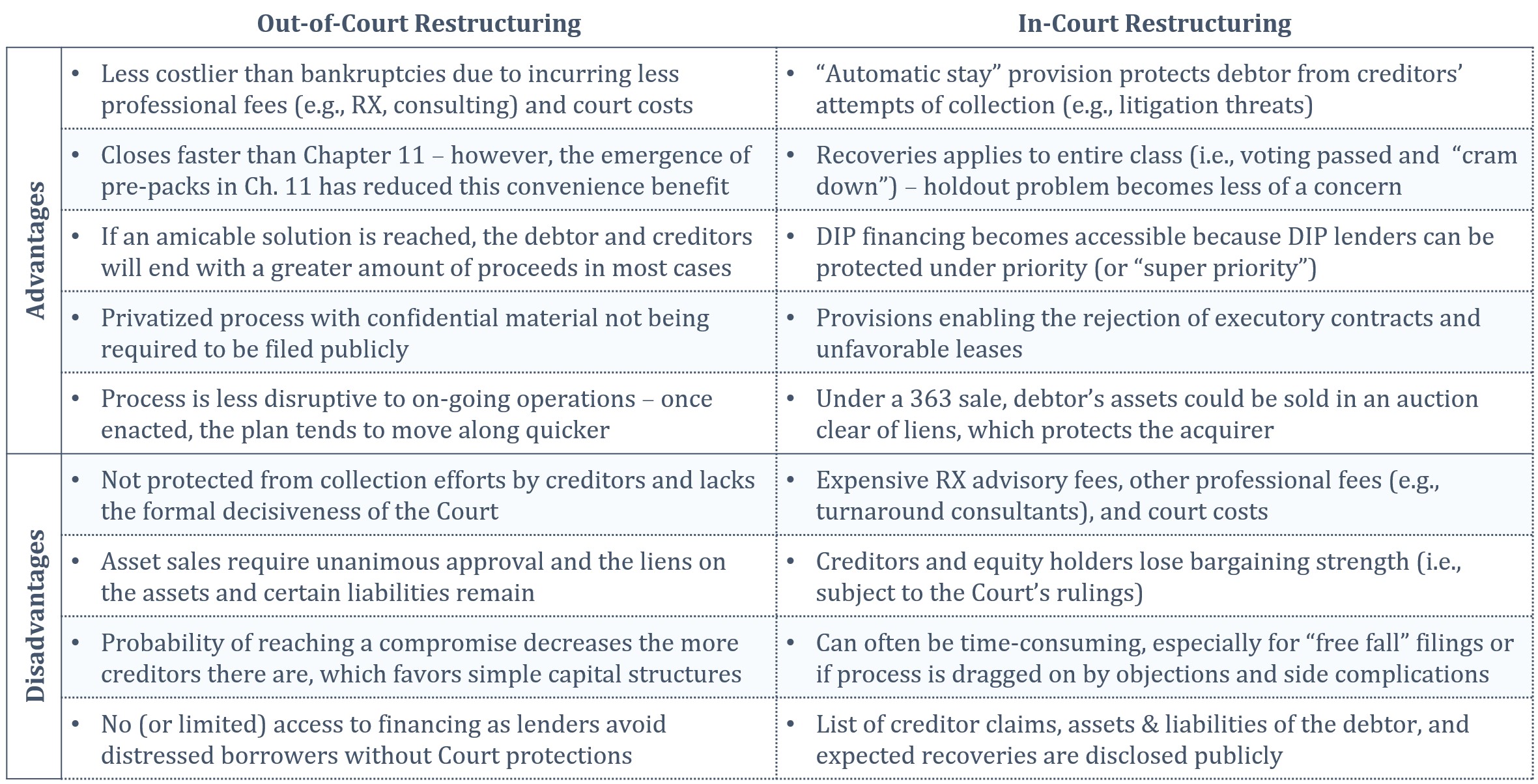 The approval of adjustments to existing debt obligations out-of-court requires unanimous approval by each of the relevant creditors that have the legal right to collect proceeds through litigation. One factor contributing to the need for a simpler capitalization is the absolute priority rule (APR), as subordinate claim holders are more likely to receive less than full recovery due to being of lower status in the payback order.

To reiterate, out-of-court restructurings are more plausible when the number of internal stakeholders is limited.

If a borrower comes to the table to renegotiate debt terms with its creditors, more constructive negotiations could occur if the following four points are outlined:

Furthermore, convincing lenders to work out a solution out-of-court can depend on:

In effect, rather than coming across as pleading for another chance with neither a valid reason nor an actual plan that shows real effort, a management team that came prepared would strive to be perceived as:

In Chapter 11, the Court cannot rush its decision-making and deviate from established, standard procedures – thus, the process cannot be expedited, which can frustrate debtors in time-sensitive situations.

If the debtor and its RX advisors can reach a compromise out-of-court, then the company has the chance to return to financial viability without the involvement of the Court.

If the debtor was unable to reach an agreement with its creditors, the outcome is disappointing. Yet, one caveat is the failed negotiations could serve as the foundation of the POR. Negotiating with creditors represents the formation of a starting point, even if it ends up failing.

Because of the previous efforts, the debtor has a sense of what the creditors want and has made progress forward, despite being unable to come to a solution out-of-court.

Holdout Problem and Lack of “Finality”

The example above shows how out-of-court restructuring cannot produce absolute finality in being able to override one creditor against the plan. Other instances include:

Since Chapter 11 is intended to serve as rehabilitation and to support a “fresh start”, the common theme amongst the provisions is the preservation of the value attributable to the debtor.

For a reorganization to be possible, the issue of liquidity must be addressed immediately.

If not promptly addressed, the value of the debtor will continue to deteriorate, which harms creditors and their recoveries. Thereby, it is in the best interests of all parties involved in the restructuring that the debtor continues to operate to prevent any further decrease in value.

The rationale behind protecting the debtor is not only to benefit the debtor but to offer an equitable resolution to the creditors by the end of the process.

Chapter 11 is often criticized as being an expensive, time-consuming, and disruptive process for the ongoing operations of the debtor, but the Court provides as many tools and resources as it can to positively impact the debtor and contribute towards its turnaround.

Two of the most common first day motion filings in Chapter 11 are:

Under Chapter 11, the debtor has the option to either assume or reject executory contracts based on the “best judgment” from management.

Chapter 11, in particular, comes with a multitude of fees associated with filing for bankruptcy, such as:

The more prolonged the process and challenging the negotiations are, the more fees are incurred by the company who is already in a weakened state.

In recent years, however, the emergence of “pre-packs” has helped alleviate these concerns as the average duration between filing and exiting Chapter 11 has gradually decreased.

Common remedies for out-of-court and in-court restructuring include adjusting the terms of certain debt, debt repurchases, and exchange offers.

If debtors and lenders negotiate adjustments to the debt terms of existing debt, potentially negative tax implications arise that must be taken into consideration. The result could be the recognition of cancellation of debt income (“CODI”) as the debtor incurred a benefit deemed a “significant” amount.

Under normal circumstances for solvent companies, “CODI” is normally taxable. But if the debtor is considered to be insolvent, it is NOT taxable – and this rule applies whether the bankruptcy is an out-of-court or in-court restructuring.

Often, a corporation can be required to recognize taxable income if the debt is forgiven or discharged for a value less than its issuance price (i.e., the original face value of the debt obligation plus accrued interest if applicable). But even if the principal amount owed on the debt is not reduced, CODI can be recognized despite the amount owned not being reduced.