Guide to Understanding the Liquidation Value

What is the Liquidation Value?

Liquidation Value refers to the method of approximating a valuation range of a debtor in order to measure the estimated recoveries of allowed claims.

How to Calculate the Liquidation Value

For a liquidation analysis, the output is based on the dollar value of assets belonging to the debtor and recovery rate assumptions of those assets as a percentage of their book value.

On the other hand, a “going concern” valuation is a function of the projected enterprise value of the post-reorganization debtor.

Under the U.S. Bankruptcy Code, there is a strict order of claim recoveries based on differing priorities set by the absolute priority rule (APR), which must be followed when filing for liquidation or reorganization.

Chapter 11 restructurings are usually the preferred option by both the debtor and creditors because of their track record of higher recoveries. In comparison, Chapter 7 liquidations have historically resulted in substantially lower recoveries.

However, there are times when filing for Chapter 7 is the most appropriate decision. Or in some cases, an attempted reorganization might turn out to be far more challenging than originally anticipated, warranting conversion to Chapter 7 – but not without incurring significant fees in the process and reducing creditor recoveries.

The difference between the two forms of bankruptcies, Chapter 11 and 7 is as follows.

For a plan of reorganization (POR) to receive confirmation from the Court, a liquidation analysis must be performed to compare potential creditor recoveries post-restructuring with the recoveries received under a hypothetical liquidation.

If the estimated plan distributions post-restructuring exceed the hypothetical recoveries under a liquidation, then the creditors are deemed better off.

In effect, the best interest test in Chapter 11 establishes a “floor valuation” to protect the recoveries of impaired creditors.

One of the most challenging tasks for creditors in Chapter 11 bankruptcies is gauging the impact of a reorganization on the valuation of the debtor.

Creditors in Chapter 11 valuing the debtor on a “going concern” basis are trying to predict the resulting valuation of a debtor post-restructuring – which is a byproduct of the reorganization plan the debtor put together using the guidance of its restructuring advisors, turnaround consultants, and related professionals.

Under the “going concern” recovery analysis, the general assumptions are:

Usually, a “going concern” valuation is predicated on the projected EBITDA of the debtor and valuation multiple derived from trading comps analysis and a discounted cash flow model (DCF).

Since the assumption is that the debtor will continue operating into the foreseeable future, traditional valuation methods can be used. Recall that the “run-rate” EBITDA reflects a normalized cash flow metric.

Since reorganizations include numerous non-recurring expenses, those must be treated as add-backs to “normalize” EBITDA (to arrive at a “run rate” EBITDA) – if not, the value of the debtor is going to be significantly understated.

Generally, “Going Concern” valuation modeling is more conservative than traditional valuation approaches. A downward bias tends to be applied to the DCF: conservative figures are typically utilized for the financial forecast and higher discount rates (15% to 25%) will be chosen to reflect the increased risks associated with distressed companies.

Similarly, the comps analysis uses the lower end of the peer valuation range since the peer group usually does not comprise the same increased level of risks as the target. In effect, a conservative multiple is used to arrive at the valuation.

Here, the “run-rate” EBITDA ranges between $60mm and $80mm while the valuation multiple ranges from 5.0x to 6.0x, each corresponding to a “Low”, “Midpoint” and “High” range. 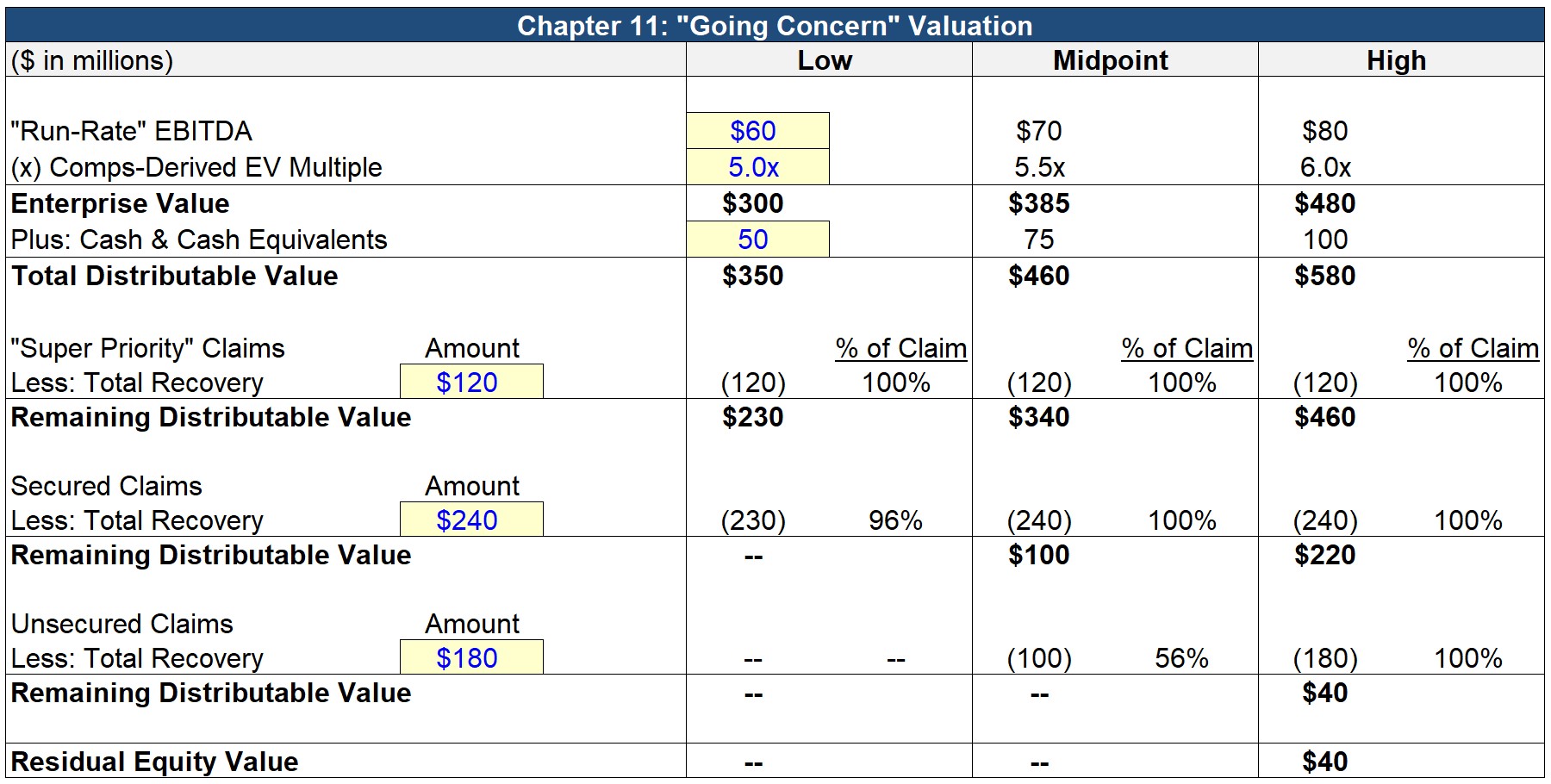 For purposes of simplicity, there are only three classifications of claims in our illustrative example:

As shown in the waterfall structure above, the distribution value continues to “trickle-down” until the value breaks (i.e., fulcrum security) and no more allocatable proceeds remain.

Something to be aware of is that the reorganization plan and disclosure statement will contain details regarding the exchanges of claims (e.g., debt-to-equity swap), implied recoveries, and form of consideration to each class of claims.

That point matters as claims higher in the capital structure are more likely to receive a full recovery in cash or other consideration similar to (or the same as) the original claim.

In contrast, subordinated claims are more likely to receive partial (or sometimes full) recovery in the form of debt but under different lending terms, equity in the new post-reorganization entity, or a mixture.

The form of consideration is a pivotal aspect of restructuring modeling to be able to understand the types of recoveries as well as the resulting equity ownership stakes.

In our recovery analysis exercise, the priority of repayment favoring secured claims is reflected very clearly in our sensitivity tables: 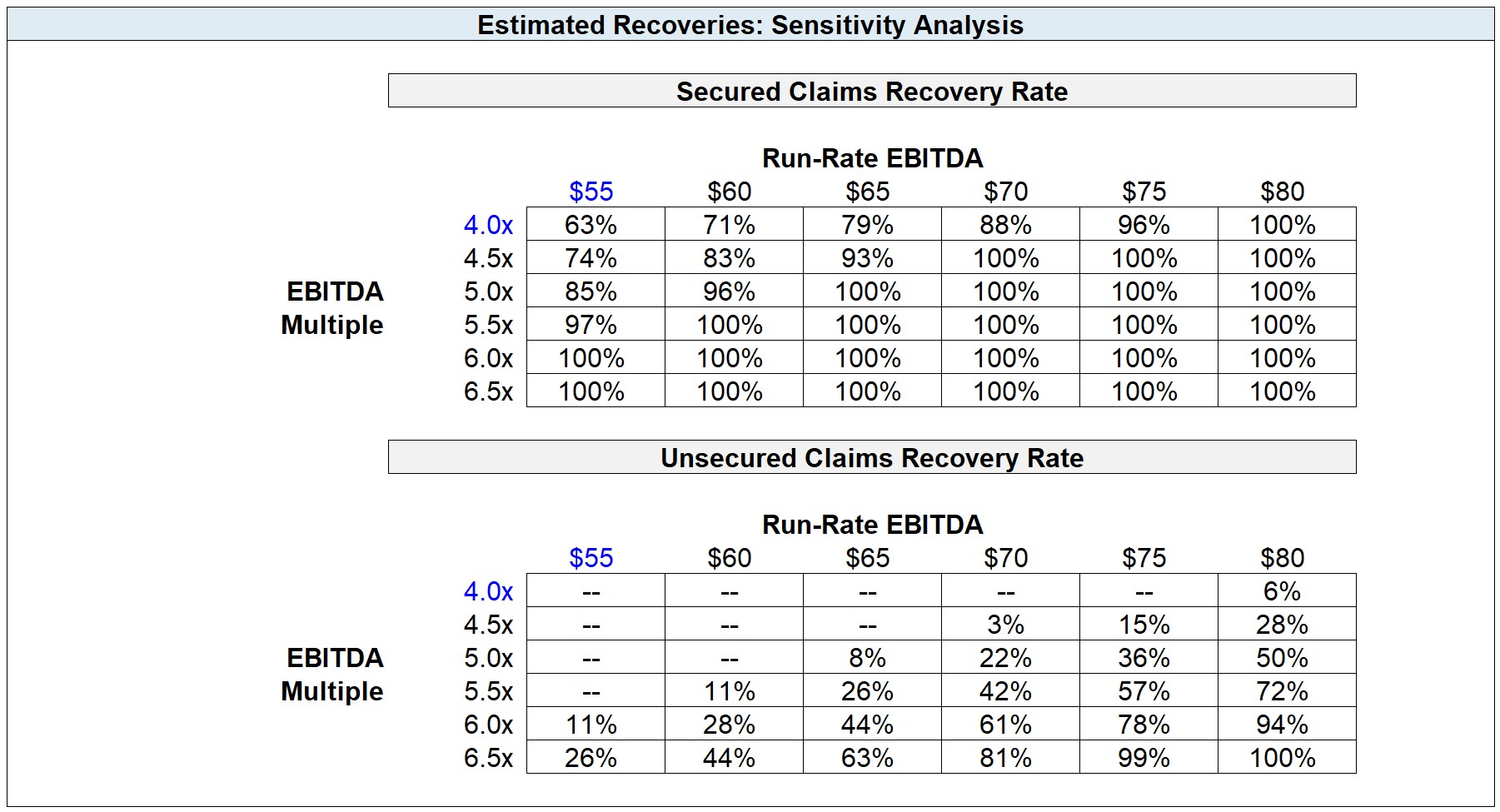 Liquidation analysis represents the “worst-case” scenario and assumes the assets of the debtor are sold separately, as opposed to the debtor attempting to turn itself around through restructuring or being sold in its entirety as a “going concern” to a buyer.

The decision to liquidate is made under the belief that creditor recoveries would be higher if a court-appointed trustee is placed in charge of the liquidation and distribution of the sale proceeds.

If the debtor filed for Chapter 7 straight from the beginning or influential creditors (e.g., Official Committee of Unsecured Creditors) made their case to the Court in support of converting into Chapter 7, the creditors are accepting that the reorganization process was a “bust” and that it would be best to liquidate before they lose even more value.

Assets with less liquidity will have more of a “fire-sale” approach upon liquidation – resulting more price discounts and fewer creditor recoveries.

Assets with less liquidity are often associated with:

The recovery rates of various assets will each differ and depend on the industry, but in general, the following ranges are: 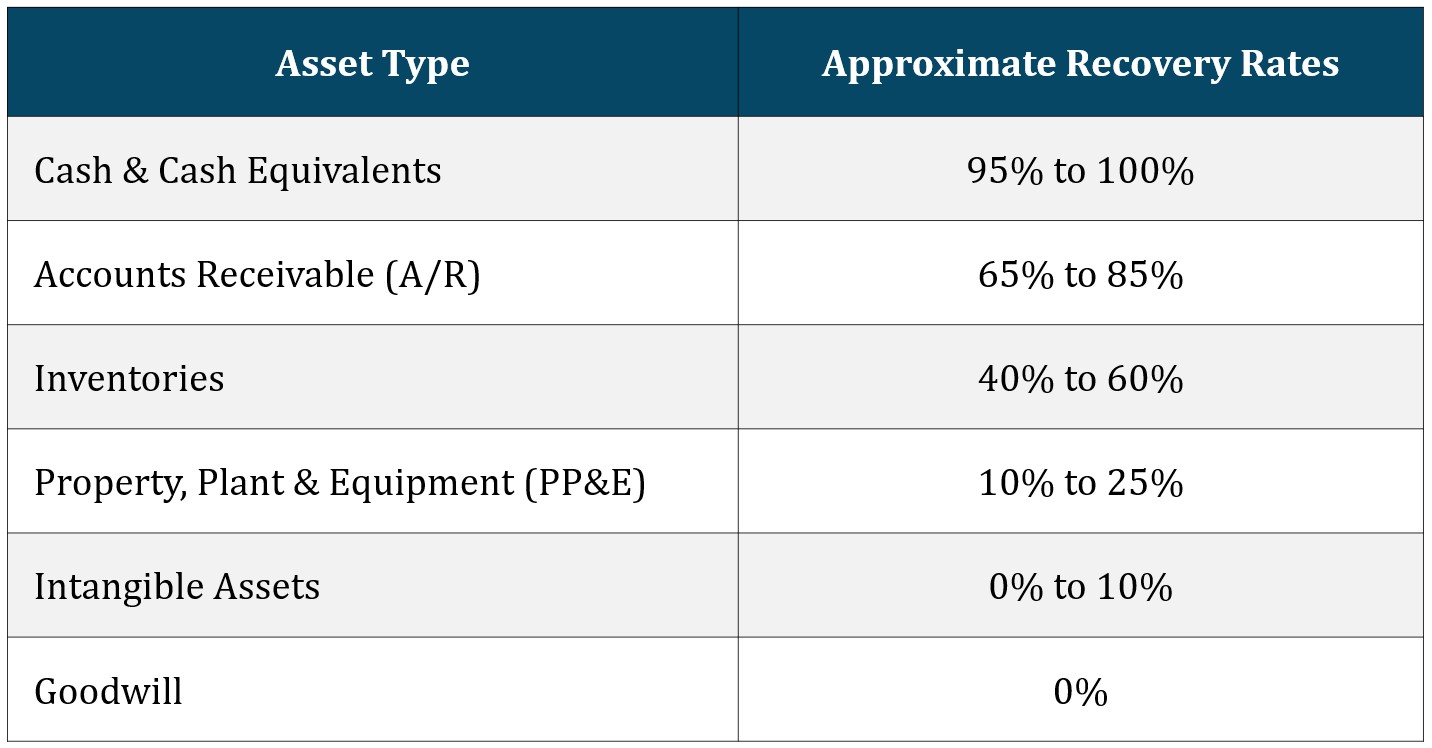 Note that these recovery rates are approximated parameters and will differ significantly based on the specific company, industry, and prevailing market conditions.

High A/R and inventory balances tend to uplift the liquidation valuation. Substantial ownership in real estate that is not encumbered by secured lenders can also have a positive impact, as well as PP&E with use cases in a variety of industries.

But at the end of the day, the main determinant of recoveries is the debt structure.

The more top-heavy the capital structure is (i.e., large asset-backed revolver, 1st lien senior debt), the worse off lower priority creditors will be.

For the most part, liquidation recoveries are a function of the collateral value relative to the size of the asset-backed lending facility (ABL) revolver and existing liens placed on the collateral by senior lenders.

Here, the assumption is that the bankruptcy underwent a conversion from Chapter 11 to Chapter 7:

The implied recoveries are clearly on the lower end in comparison to those received under Chapter 11.

Even under the optimistic case, for instance, the secured claims fail to receive full recovery (i.e., at 67%), which should help garner support from creditors and the Court in favor of the proposed POR.

Unique to certain retailers such as Neiman Marcus, the recovery rate of merchandise inventory can exceed 100% as the market value at liquidation is greater than the book value.

This can be attributed to how inexpensive inventory could be for mass volume purchases. Even if discounts were to be applied by the Chapter 7 trustee, the markups on the clothing could still be around 2x to 4x the initial cost. 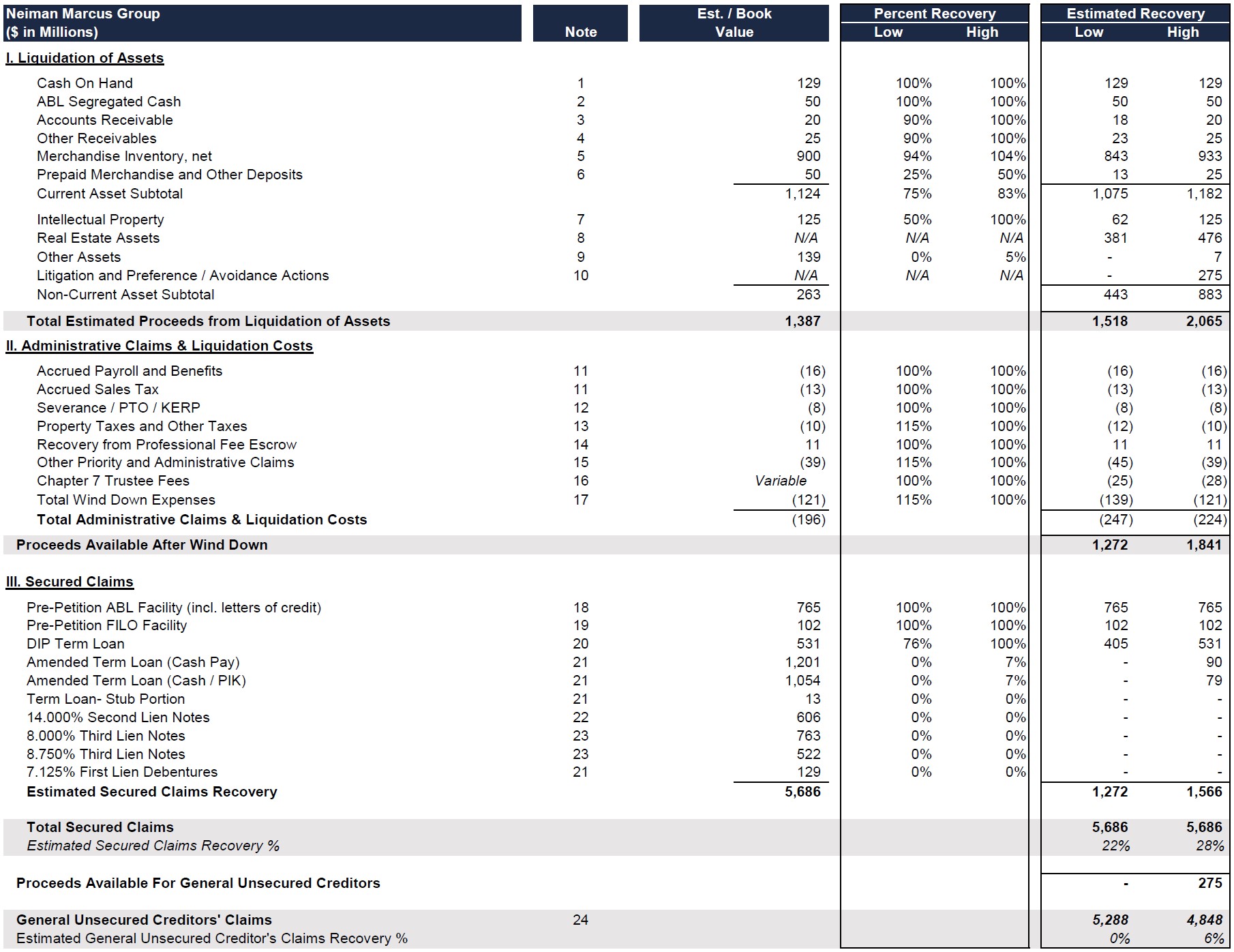 Another noteworthy distinction is the recovery rate of intellectual property, which ranges from 50% to 100% due to the brand portfolio owned by Neiman Marcus. Recoveries on intangible assets are typically around 0% or a single-digit percentage, but there are exceptions to the rule, as seen here.

To reiterate, recoveries rates are very unpredictable; however, a few ranges that tend to be fairly consistent are:

If a debtor were to file for Chapter 7 right away, there would be no DIP financing in its capital structure. However, in the case of a conversion from Chapter 11 to Chapter 7, the DIP credit facility and lending arrangement fees must be accounted for.

Considering the DIP loan likely has “super priority” status, the claim is at the top of the priority waterfall and the cash of the debtor will be used to repay the entire outstanding DIP balance.

Because this is a straight liquidation and the debtor will cease to exist by the end of the ordeal, no agreement can be made to bypass the DIP claim payout like in Chapter 11 (e.g., DIP loan re-negotiated into exit financing).

In addition, other administrative claims entitled to priority would be incurred, such as Chapter 7 Trustee fees and the “wind-down” expenses as highlighted below.

Often, the Chapter 7 trustee becomes forced to offer steep discounts until the assets of the debtor are sold off. While the main reason is to compel buyers to purchase the assets and increase their marketability, the sales also usually have to be made in a short time frame.

The trustee is under no obligation to maximize creditor recoveries; rather, the main responsibility is to ensure the sale proceeds are distributed amongst creditors in accordance with the priority of claims.

Since there is no incentive (or legal requirement) for the trustee to liquidate at the highest potential price attainable, the recoveries of unsecured claims could be pennies on the dollar, and occasionally, even secured creditors are not able to be paid in full.

In closing, creditor recoveries are higher under the plan to emerge from Chapter 11 than Chapter 7, and thus, a reorganization is the preferred option in the vast majority of cases.

Please provide the source for the average liquidation recovery rates by asset class (e.g. cash, AR, inventory, etc.) shown in the table above.