What is the U.S. Trustee Program?

In addition, the Trustee is delegated with the task of ensuring the debtor is in full regulatory compliance with its obligations as the debtor in possession, evaluating motions and reports are filed by the debtor, and managing the appointees of creditor committees.

At the onset of the Chapter 11 process, the U.S. Trustee is responsible for reviewing the debtor’s immediate requests, which are often very urgent in nature. Despite the time-sensitive nature of the requests, the Trustee must ensure that each of the requests is made properly and is disclosed fully to all relevant creditors, as these decisions can have significant implications on the negotiations held later on in the case.

Early on in the case, official committees are typically established to put like creditors together and work together throughout the case. The purpose of each committee is to protect the interests of the specific group of internal stakeholders it represents, such as unsecured creditors or bondholders. At this stage, the U.S. Trustee will oversee the appointing of committee members – but the level of involvement can differ by the specific case. Also, the Trustee oversight includes supervision of the 3rd party professionals hired by each of the creditor classes, such as restructuring professionals and legal attorneys.

A few of the most common first day motions filings in Chapter 11 include requests for:

In the case that the debtor requested approval to obtain emergency DIP financing, the U.S. Trustee (and the Court) will make sure the proper steps are followed in order for the correct protections to be offered to the DIP lender while also remaining cognizant of the contractual claims held by senior creditors. For example, the existing creditor claims and liens on collateral must all be closely examined and taken into account.

To arrive at an equitable solution, communication among the debtor and creditors is critical – and the U.S. Trustee is responsible for facilitating transparent dialogue and ensuring on-time filings.

As part of the Chapter 11 procedure, the debtor has legally obligated disclosure requirements such as:

The filings must provide adequate and accurate information for the creditors to make an informed decision (i.e., based on all material information). The compliance of these rules and complete transparency are a part of the debtor’s fiduciary duty to creditors, as they must allow parties to monitor its progress (or lack of it). Based on the strict deadlines set by the Court, the debtor must file all required documentation and reports in a timely manner – and the U.S. Trustee will be tasked with preventing unnecessary delays and confirming the debtor is aware of the scheduled filings and deadlines.

The U.S. Trustee is also responsible for reviewing the proposed plan of reorganization (POR) and the disclosure statement required for the POR to be voted on, which includes the 13 week cash flow model (TWCF) and shows the short-term funding requirements of the debtor as well as the trends in working capital and credit metrics.

The Court is authorized to order a conversion or dismissal if it is determined to be the best course of action for the interests of the creditors. 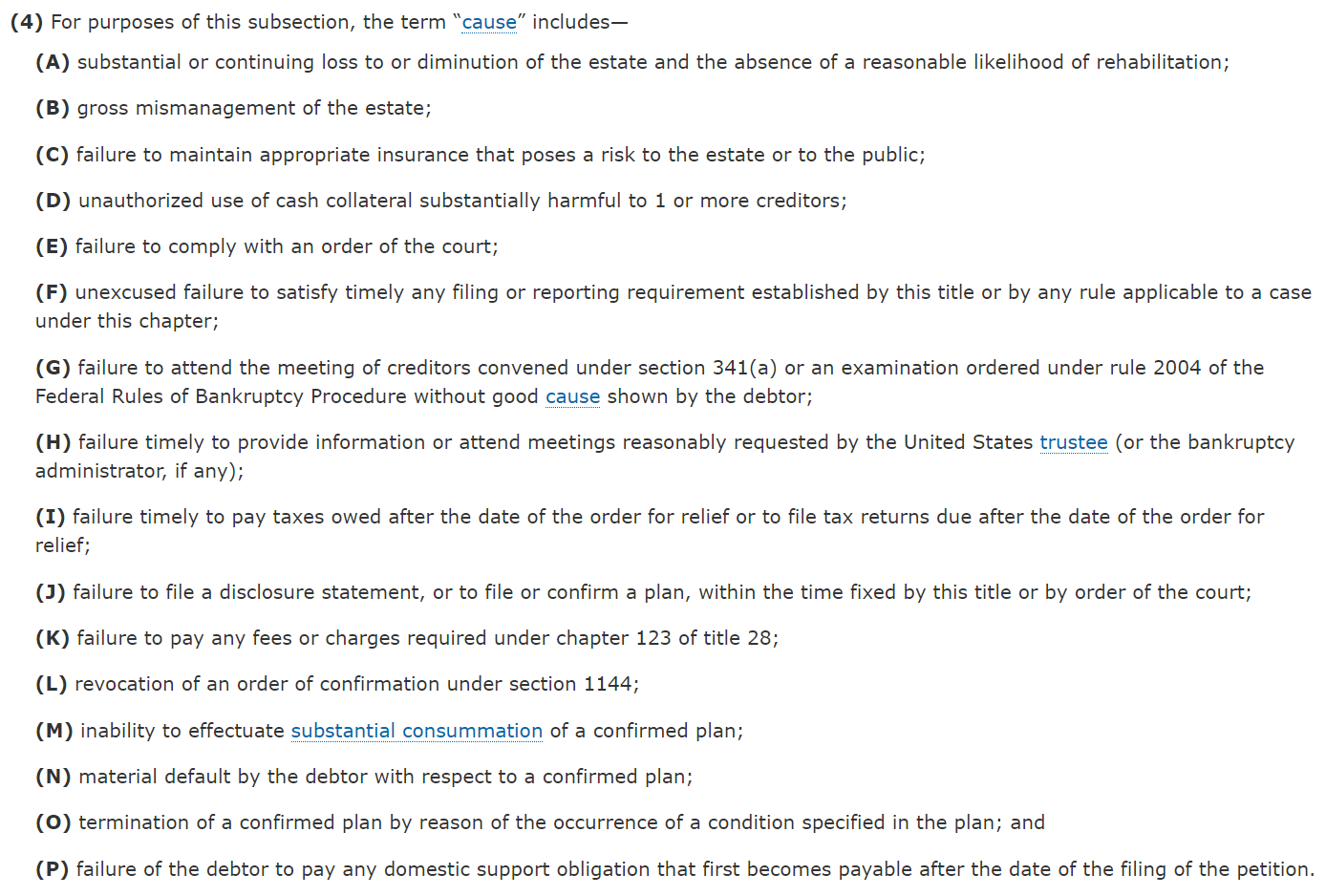 There are several reasons listed, as shown above, but the most relevant reasons for the U.S. Trustee to order a conversion or dismissal are:

Said another way, the case has been going nowhere and the creditors have voiced their frustration and opinion that it would best to just “throw in the towel” before further damage is done.

The two most common types of creditor committees are:

Once the committee groups are running and engaging in meetings, the U.S. Trustee serves as the point of contact between the debtor and the committees. Each subgroup represents different creditors, making each of their requests and priorities vary – and thereby, the Trustee must communicate all of their requests to the debtor and make sure they are addressed under a reasonable timeline.

The goal is for communication between the debtor and impaired creditors to be seamless in order to minimize the chance of a group of creditors feeling intentionally left out or in the dark. In short, the U.S. Trustee needs the debtor to fulfill requests and converse with the creditors to address any concerns or desires to gain more insight into what is being done (and the results). If requests for material or filings are not made on schedule, in the worst-case scenario, the creditors could push for a Chapter 11 Trustee or conversion to Chapter 7 liquidation.

One distinction to be aware of is the difference between the U.S. Trustee and Chapter 11 Trustee, as the two should not be confused for one another. The U.S. Trustee will be appointed from the start and have an important role in all Chapter 11 bankruptcies, whereas the Chapter 11 Trustee is appointed only if the old management team is being replaced for the “best interests” of the creditors and the estate of the debtor.

Therefore, the U.S. Trustee appoints the Chapter 11 Trustee, who would become responsible for representing the estate of the debtor for the remainder of the bankruptcy proceeding.

Besides managing the compliance by the debtors and creditors in accordance with the U.S. Bankruptcy system, another role of the Trustee is to investigate criminal or fraudulent misconduct by the debtors and creditors to make sure the process is being held to a high standard. In the case of apparent violations, the Trustee will notify the Court, and if appropriate, file a report on apparent criminal fraud to the U.S. Attorney’s Office depending on the circumstances.

For Chapter 11 to proceed as planned, the debtor must comply with all regulatory requirements and meet all requests made by creditors as well as evade participation in any type of fraudulent, misleading behavior.

Likewise, the creditor committees must not violate any rules and are held to the same legal standard. Under the oversight of the U.S. Trustee, who helps ensure the absence of such misconduct while promoting transparent communication, the chances of a favorable outcome for all parties involved are increased.