Guide to Understanding the Plan of Reorganization (POR)

What is the Plan of Reorganization?

The Plan of Reorganization (POR) is a document containing the post-emergence turnaround plan drafted by the debtor after negotiating with creditors.

Upon settling on the decision to file for Chapter 11 bankruptcy, the U.S. Bankruptcy Code permits the post-petition debtor to receive an exclusivity period to propose a POR to the Court and creditors.

How the Plan of Reorganization Works (POR)

Before creditors can partake in the voting process on the debtor’s proposed plan, the POR must first be approved by the Court for meeting its information disclosure criteria. If the vote passes, the POR moves onto the phase of undergoing various tests performed by the Court.

The passage of the minimum standards of fairness and other conditions signifies confirmation of the POR and the debtor can emerge from Chapter 11 – this means liquidation was avoided and now, the debtor can re-establish itself into a financially viable entity with a “fresh start.”

If the post-reorganization debtor holds more value in comparison to its liquidation value, the ideal outcome of Chapter 11 has been met.

Plan of Reorganization in Chapter 11 Bankruptcy

The plan of reorganization represents the proposal by the debtor that lists how it intends to emerge from Chapter 11 as a financially viable company – following the period of negotiations with creditors.

In addition, the POR also consists of the details regarding the classification of claims, treatment of each class of claims, and the anticipated recoveries.

The POR outlines various significant details regarding how the debtor intends to:

The recovery types and the classification of claims differ case-by-case, but in all cases, creditors of lower priority in the capital stack are not entitled to receive any recoveries until more senior claim holders were paid in full under the absolute priority rule (APR).

Certain classes of creditors may also be deemed “impaired”, in which the recovery value is less than the creditors’ original prepetition debt value, whereas other classes are “unimpaired” (paid back in full in cash), often in the same or very similar form of consideration as before (i.e., similar debt terms).

That being said, this is the rationale as to why distressed debt investors place such importance on the fulcrum security (i.e., purchasing prepetition debt in hopes of equity conversion).

Assuming a successful turnaround is achieved from the restructuring process, the upside from the newly-issued equity can be substantially greater than the returns from the senior secured lenders that received new debt as part of the restructuring.

The three main Chapter 11 filing types are the following: 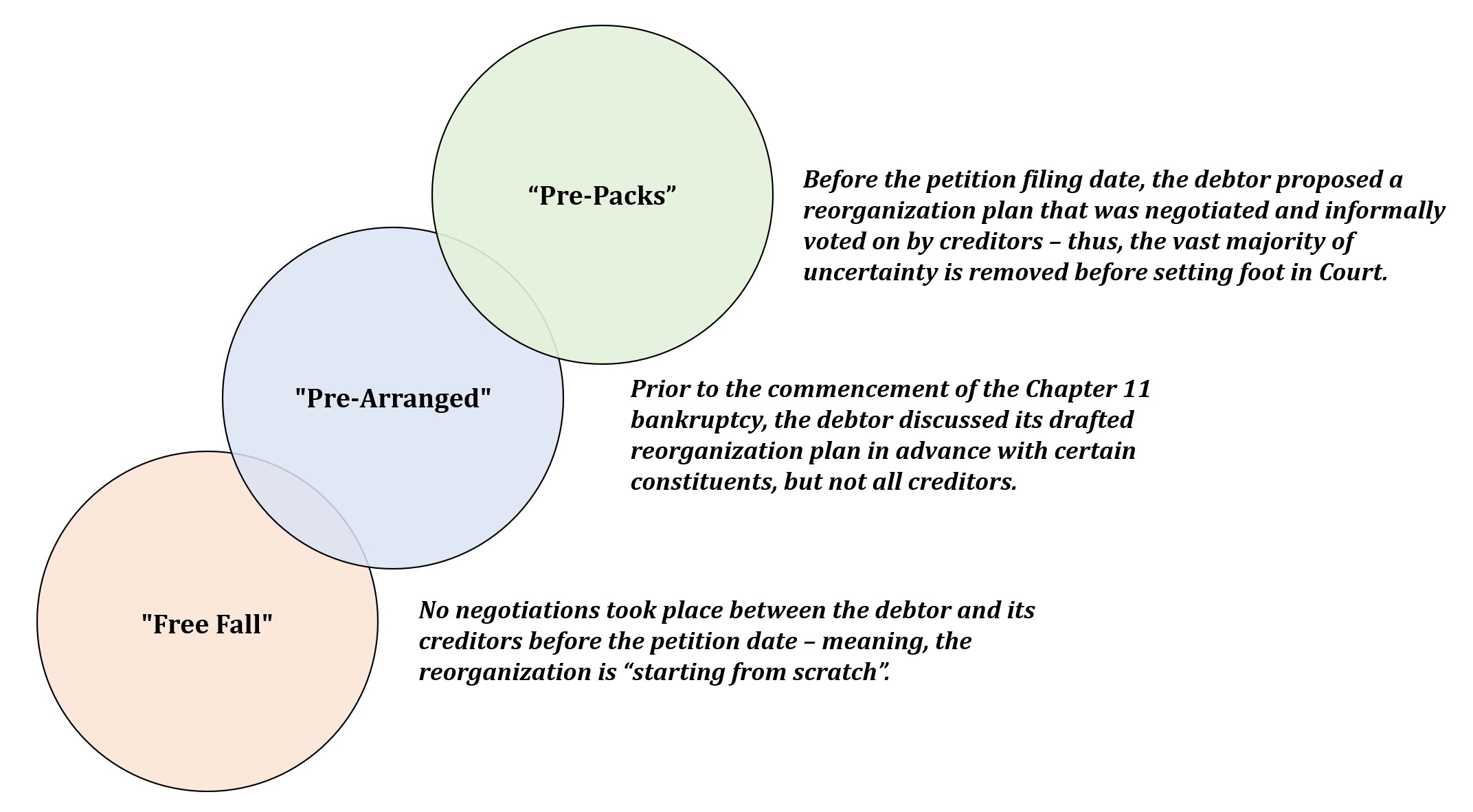 The chosen approach directly influences the complexity of the restructuring process and the time required before a resolution is reached, as well as the total costs incurred.

In accordance with the period of “exclusivity”, the debtor has the exclusive right to file a POR for approximately 120 days.

But in reality, extensions are regularly granted by the Court, especially if an agreement seems very close by with considerable forward progress being made.

Throughout this period of “exclusivity”, the days are comprised of negotiations between the debtor with creditors to arrive at an amicable solution.

In the process of doing so, the debtor is likely to encounter numerous obstacles, with some examples of potential hindrances below:

Under Chapter 11 bankruptcies, the debtor can continue operating under Court protection while negotiating with creditors and improving upon the POR.

To address such concerns and to put the debtor in a position that maximizes its chances of achieving its goal of coming out of bankruptcy as a more operationally efficient company, the Court affords certain provisions to the debtor that help re-establish trust from suppliers, customers, and other stakeholders.

In addition, provisions such as debtor in possession financing (DIP) can be granted to address urgent liquidity needs, as well as the critical vendor motion to incentivize prepetition suppliers/vendors to work with the debtor.

These types of fillings are requested to the Court on the date of the first day motion filings, which is a hearing meant to minimize the loss in value while under bankruptcy protection.

In the process of restructuring its balance sheet, operational restructuring can be done, which tends to be more effective if the Court is involved.

For example, the debtor can partake in distressed M&A and sell assets as a method to increase liquidity. In the ideal scenario, the assets sold would be non-core to the operations of the debtor, allowing the business model to become “leaner” with a clearer target market and strategy.

Additionally, the cash proceeds from the divestiture could be used to reduce leverage and “take out” certain debt tranches if approved by the Court.

Since the transaction took place in-court, the Section 363 provision could help maximize the valuation of the asset being sold and increase its marketability – plus, if a “stalking horse” bidder is involved in the sale process, a minimum floor purchase price can be set as well as minimum bid increments.

The distinct advantage afforded to the buyer is the ability to purchase the asset free and clear of existing liens and claims, with minimal risk of a legal dispute arising in the future.

Collectively, the POR and disclosure statement should enable creditors to make a well-informed decision prior to voting on the plan with all material information disclosed.

Before the voting process can be underway, the debtor is required to file a disclosure statement alongside the POR.

Coupled with the POR, the disclosure statement helps creditors make an informed decision in favor or against the POR.

The document is relatively similar to a prospectus in that it is intended to contain all material information relevant to the vote and the state of the debtor.

The main section of the disclosure statement is the classification of claims and specifications regarding the treatment of each class of claims under the proposed plan.

Based on the classification of a claim, certain creditors will receive:

The form of recovery received by each class will be subject to negotiations, but the decision is largely constrained by the debtor’s situation.

For example, suppliers/vendors may prefer cash payments, whereas distressed buyout firms prefer equity as part of their investment strategy, but the financial state of the debtor ultimately determines whether such preferences can be met or not.

The 3-step POR requirement process preceding the creditor vote and confirmation is listed below:

Once the POR and disclosure statement have received approval from the Court, creditors holding “impaired” claims are entitled to participate in the voting procedure (i.e., those that were adversely impacted). On the other side, holders of “unimpaired” claims cannot vote on the POR.

For the POR to receive acceptance in the vote, it must receive approval from:

Once the ballots from the vote are collected and tallied by the Court, a formal hearing would then be set to determine whether to confirm the plan (i.e., make sure it passes the tests listed in the Bankruptcy Code).

To receive final confirmation and be passed, the POR must be in compliance with the following minimum standards of fairness:

Assuming the POR has passed all tests and is officially confirmed by the Court, the debtor can emerge from Chapter 11 on the so-called “plan effective date”.

From this point onward, the management team must now properly execute the plan as strategized in-court and be held accountable for the post-emergence outcome.