What is Same Store Sales?

The Same Store Sales metric compares the performance of an individual store in a given period relative to the same period in the prior year.

Using the same-store sales metric,  companies can compare each individual store’s performance against its performance in the previous year.

By measuring a store’s performance over a specified time frame, the company and investors alike are able to determine whether a given store is outperforming, underperforming, or on par with the past.

In particular, the same-store sales metric is useful for decision-making by upper-level management of publicly-traded companies, i.e. the market will often scrutinize a company for not shutting down unprofitable locations that are weighing down on the overall company’s profit margins.

Therefore, the metric is not only for stores to track their own progress but also to ensure that their performance is sufficient to meet the expectations of others.

If a specific store is clearly lagging behind its peers, it is the corporate management team’s responsibility to identify the source of the problem and provide a solution to the store.

In order to calculate the same store sales metric, a store’s sales in the current period are divided by its sales in the prior period.

After that, the result must be multiplied by 100 to express it in percentage form.

The formula for the metric is as follows.

The drivers of same-store sales growth are 1) the price of products being sold, and 2) the total number of transactions.

The relationship between the price and the number of transactions is that more transactions directly reduce the company’s reliance on pricing to generate enough revenue.

On the other hand, setting prices higher to meet revenue expectations can often be counter-productive because fewer customers can afford to purchase the products.

During the same period in the prior year, the division brought in $1.7 billion in revenue.

The exact revenue assumptions we’ll use in our calculation are as follows:

As for the restaurant data, we’ll use the average between the beginning and ending number of restaurants.

Upon dividing the quarterly revenue by the average number of restaurants, we arrive at average quarterly sales.

From there, the implied same-store sales growth is 8.5%. 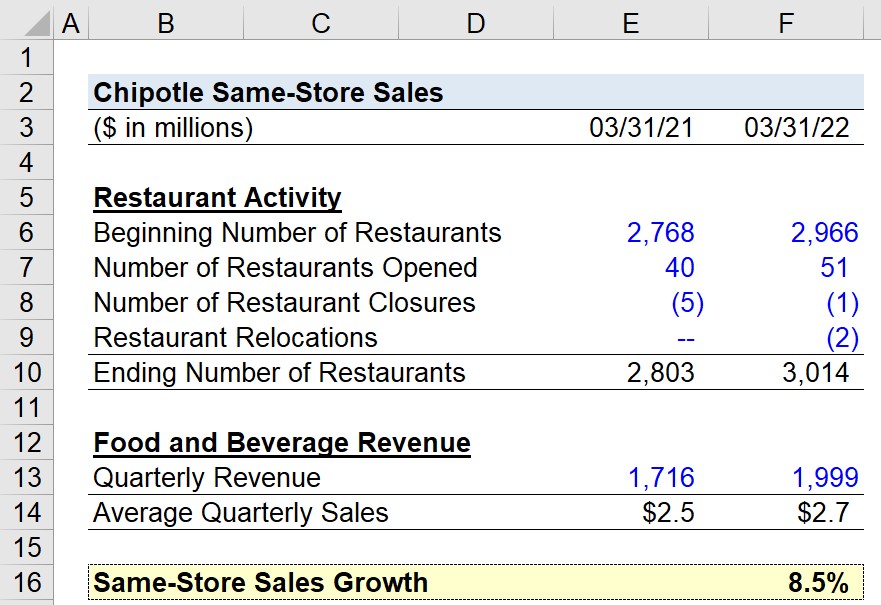 Per Chipotle’s quarterly filing, the stated comparable restaurant sales increase was 9.0%, which is slightly off from our calculation.

The difference is because we used a simplified average sales figure in our calculation.

Since Chipotle has greater access to internal information, its calculation is more precise and only takes the average sales of stores in operation for a minimum of 12 months.