What is Top-Down Forecasting?

The top-down method takes on a “bird’s eye” view of the total market that is reasonably attainable to project the revenue of a company.

The top-down forecasting approach provides a projection of revenue by multiplying the total addressable market (“TAM”) of a given company by an assumed market share percentage.

Compared to the bottoms-up approach, the top-down approach tends to be more convenient and less time-consuming to perform.

However, a bottoms-up approach is generally the preferred method by practitioners because it focuses on the specific unit economics of the business rather than taking a broad market-based view, making the associated assumptions arguably more defensible.

The top-down approach is often used by established, mature companies that have decades of financial results, an international presence and several different lines of business segments (e.g., Amazon, Microsoft).

For companies of such large magnitude and diverse revenue sources, breaking the business model into a granular product-level forecast could become too complicated and more importantly, the benefit of doing a detailed bottoms-up forecast would only be marginal.

The top-down approach is also often used for early-stage companies that lack any historical financial data in order to create a fundamentals-based forecast.

Because of the absence of data to work with, a top-down approach is the only option in those scenarios, as a bottoms-up forecast for a seed-stage company would include too many discretionary assumptions that cannot be backed up by historical results.

While top-down forecasts are viewed as less credible than a bottoms-up forecast, it is still useful for quickly validating the revenue potential of an early-stage company operating in markets that are not yet well-defined.

For companies that fall in between the seed and mature stages such as late-stage companies in the growth stage, the top-down method tends to be viewed as a “quick and dirty” approach to projecting revenue and is therefore rarely taken at face value. Instead, the top-down revenue forecast serves as an initial starting point before delving deeper into the company.

Rather than being meant to be a precise projection, the use-case of top-down forecasting is a “back-of-the-envelope” estimate in order to decide if an investment opportunity is worth diving into.

In our simple example scenario, we are assuming that this is a top-down revenue build of a B2B software company based in the U.S. with SMBs (small-to-medium businesses) as the target customer type.

The total addressable market (TAM) is representative of the entire revenue opportunity available within a market for a particular product/service offering.

As implied by the name, the top-down approach begins with a macro view of various factors – beginning with sizing up the total addressable market (“TAM”).

The TAM is an all-encompassing view of the market and the broadest in terms of having the most relaxed standards in measuring the potential customer count.

In other words, the TAM is the total (global) market demand for a product and the maximum amount of revenue that can be made in a specific market (i.e., the company and its competitors are all competing for their share of this market).

Next, the TAM can be broken down into the serviceable addressable market (“SAM”), which is the proportion of the TAM that actually needs the company’s solutions. In effect, we are starting with the largest potential value for the TAM, and then reducing it using company-specific information and assumptions regarding the market. 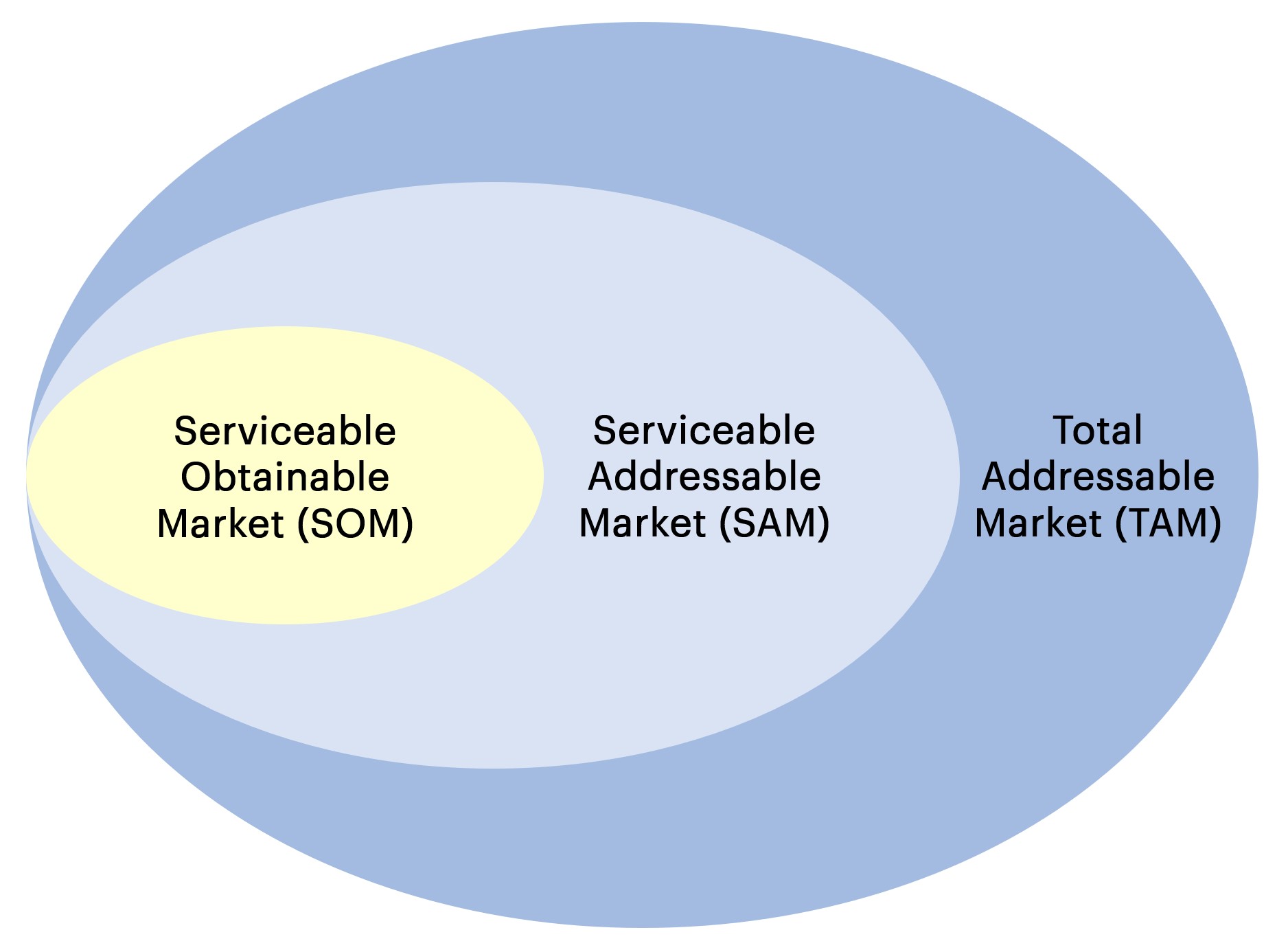 The SAM depicts the percentage of the total market that could realistically become customers based on the fit with the product offerings and the business model (e.g., geographic reach, technical capabilities, pricing).

To be able to reasonably approximate the TAM and SAM with relative accuracy, the customer profiles in the market and their specific needs must be understood to assess whether these types of customers can actually become potential customers.

The final subset is called the serviceable obtainable market (“SOM”).

The diagram below lists the formulas used to calculate the TAM, SAM, and SOM: 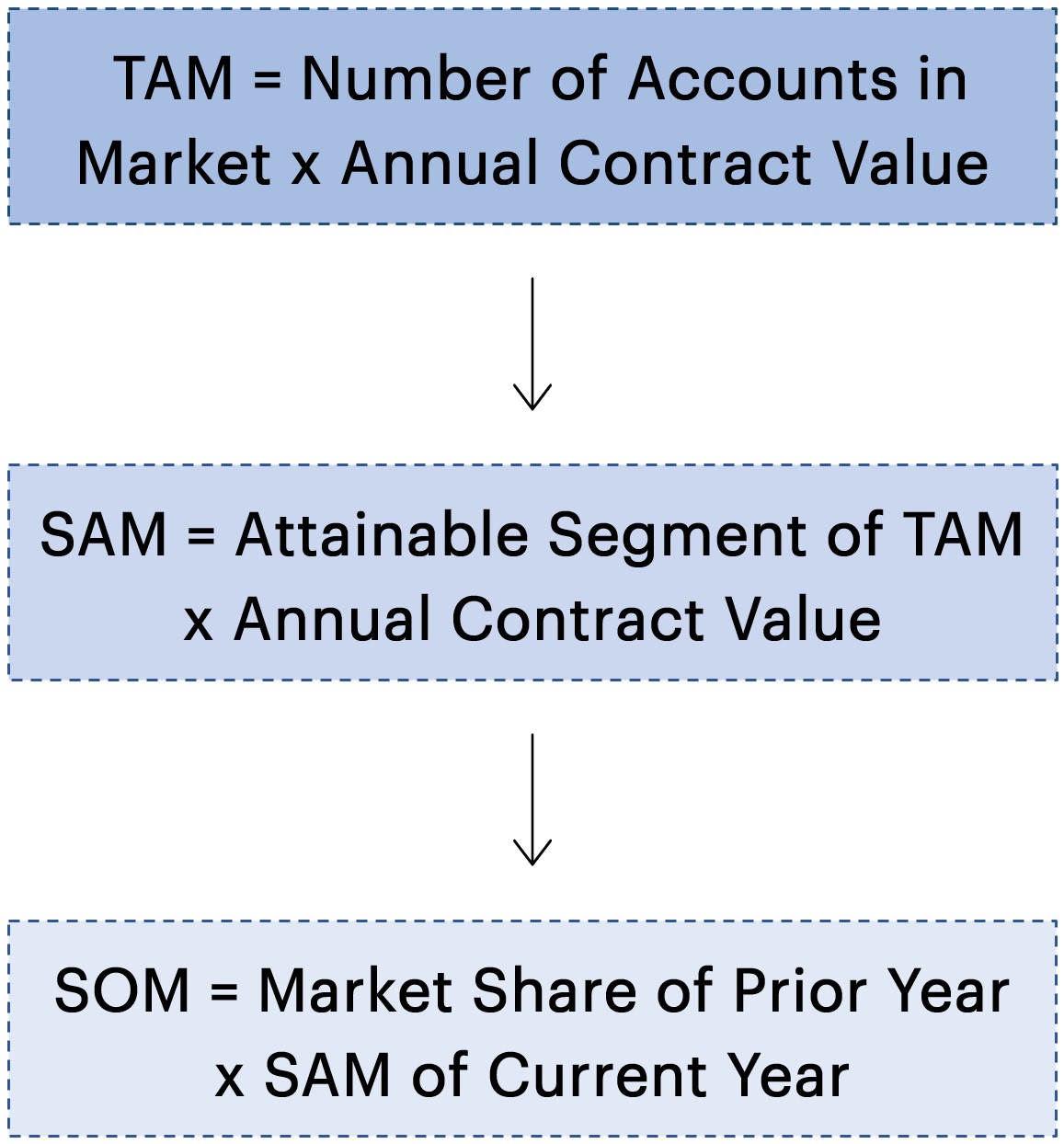 To begin our walk-through of the hypothetical scenario used in our model, we first determine the total number of companies that the company could potentially sell its products to.

Based on our assumptions, we can see that in 2020, in the global market there are a total of:

In our made-up scenario, the size of the market has been determined to consist of 50,000 total potential customers.

The next step is to project the growth rates of the market. But as opposed to attaching a growth rate assumption to the entire market, the forecast will be far more accurate and reliable if the market is segmented.

These growth rates must take into account the trends that pertain directly to each specific sub-market, which requires referencing market data and industry reports to understand which areas of the market present the highest growth opportunities (and vice versa).

From our example, SMBs are the highest growth segment in terms of customers growth while larger enterprises appear to lag behind.

In our example, we have used the average contract value (“ACV”), which is common to see for software companies.

Notice that while this is a top-down forecast, there are aspects of the process that are bottoms-up (such as this piece), as the two approaches are not mutually exclusive.

Based on our ACV assumptions, SMBs will exhibit the most upside in customer pricing (i.e., ACV) during the coming five years. Currently, the ACV in 2020 is $25, but this is anticipated to roughly double to $51 by the end of 2025.

The pricing rates for large enterprises are likely near the ceiling, whereas SMEs and SMBs have more room to grow. This suggests the type of software being sold was initially geared towards larger enterprises but had not been customized to serve smaller businesses.

SMBs are the customer segment with the highest expected CAGR of 34.9% in the forecast period, as seen by the 5-year CAGR of the segment’s TAM.

Putting the observations so far together such as the TAM growth and pricing upside, SMBs seem to be the most compelling growth opportunity among the three customer categories.

Now in the subsequent steps, we will:

After multiplying the customer count under each classification by the corresponding ACV, we can compute the TAM of each individual segment for each year and then sum all three segments for the entire market.

For example, the TAM of SMBs in 2020 is calculated by multiplying the $25 ACV by the 40,000 SMBs globally that fall under the customer profile. Once the same is done for SMEs and large enterprises, the total market size comes out to $1.6bn.

Moving onto the SAM, since the B2B software company sells a target primarily intended for usage by SMBs, our assumptions are skewed towards that specific customer type. In addition, we can narrow our market down further based on those located in the U.S.

Therefore, of all the potential companies to sell to that were included in the TAM, the product can realistically be sold to:

Those excluded customers are not necessarily impossible to acquire, but given the current circumstances of the company and various factors (e.g., geographic reach, targeted growth plans, product features, scalability capacity), the SAM serves as a more realistic assessment of the market that can be obtained.

Then, using the SAM figures, revenue is projected by:

For simplicity, we are assuming that revenue is equivalent to the SOM; hence, the usage of conservative numbers when estimating the SOM (i.e., % of SAM and YoY growth rates).

In our model, we have included three different scenarios:

The revenue projections under the upside case have been shown below.

And by dividing the projected revenue per customer type by the coinciding ACV amount, we can back out the implied customer count.

For the base case, the market share assumption is that for each segment, the share percentage will remain unchanged throughout the entire forecast period.

But revenue still grows at a CAGR of 31.7% because of the growth of the overall market. More specifically, the revenue of the B2B software company is concentrated on SMBs, and recall, SMBs market growth is expected to grow at 34.9%.

The takeaway is that even if the company fails to capture market share (i.e., around 1.6% of TAM and 2.5% of SAM), its total revenue can still grow at a 31.7% CAGR over the next five years.

Finally, we have the revenue projections under the downside case shown below:

In the downside case, the CAGR of total revenue is still relatively strong at 25.6%. But in the later years, it is clear that the number of customers is beginning to wane.

While this type of performance and growth would be considered impressive for most companies, the B2B software industry is typically held to a higher standard.

For B2B software companies, revenue is typically on a contractual basis, meaning there is a guaranteed number of years that the company will be doing business with the customer, which can conceal internal problems.

An example of this would be IBM Watson in A.I. healthcare, where despite all the negative feedback and press coverage on the software, the division still was able to continue operating until IBM decided to shut it down in 2021 in an effort to improve its margins.

As a result, for failing B2B software companies, the “bleed out” tends to be a slow, gradual process, as opposed to an abrupt collapse in a single year. This is one reason why private equity views B2B companies favorably, but in the case of venture capital, most firms would become weary and take a close look at the customer churn (and may pass on an opportunity even if revenue growth is 20%+).

Of course, there are worst-case scenario exceptions when software companies end up filing for bankruptcy in a matter of a couple of years, but this is usually due to an acceptance and recognition by the management team that the start-up would most likely fail and that it would be in the best interests of their investors and customers to throw in the towel.

In these cases, the company likely could have continued operating for a few more years if management wanted to, but the longer-term prospects of the business appeared bleak.