How to Calculate ARPU (Step-by-Step)

ARPU stands for “average revenue per user” and quantifies the typical revenue generated from each user.

The ARPU is useful for determining if the current monetization strategies are working as intended, which would be reflected by the ARPU trending upward over time as improvements are implemented.

For all companies, regardless of industry or size, long-term profit generation boils down to one single question, “How much is a single customer worth to a business?”

The go-to-market strategies employed to achieve growth (e.g. sales & marketing, product development) are all dependent on the answer to the question stated above.

A rational, well-run company should be hesitant to continue spending significant amounts of capital if the potential return from customers is insufficient.

The exception is if growing the user base takes precedence over monetizing the users for the time being, but eventually, the company must become more profitable.

Therefore, a company’s ARPU essentially sets a ceiling on the amount that can be spent to fund growth and expansion plans.

The formula for calculating the average revenue per user (ARPU) is as follows.

Each of the company’s customers contributed $100 in revenue.

Taking it a step further, there are numerous variations of the rather basic ARPU calculation, which has many shortcomings.

A common variation of the ARPU metric is the average revenue per paying user, or “ARPPU”, which is predicated on the notion that only paying customers should be included to better understand the true amount of spending per customer.

The premise of the ARPPU is similar to that of popular metrics for internet companies such as daily active users (DAU) per month. The objective is to count only those users that are “active” on the platform.

If “inactive” users (or non-paying customers) are included, the average payment value can easily become skewed, so splitting up customer types allows companies to better grasp spending patterns and amounts.

However, note that many companies use the “ARPU” and “ARPPU” interchangeably, so it is crucial to confirm how the company calculates each metric.

How to Increase ARPU

It should go without saying that a higher ARPU (and year-over-year growth) is clearly going to be beneficial for a company over the long run.

Suppose we’re tasked with calculating the ARPU of a subscription streaming service company with the following product and customer data points in the fiscal year ending 2021.

From the assumptions listed above, we can see that of the total customer base, 40% are on paid subscription plans whereas 60% are on the “freemium” plan (or are inactive accounts – i.e. a customer created an account but is not actively using it).

If we multiply the average monthly subscription price by the number of users on the paid subscription tier, we arrive at $5mm for our company’s monthly revenue.

Since we are calculating ARPU (and ARPPU) on an annual basis, the next step is to annualize the monthly revenue by multiplying it by 12 months.

Since we have the company’s annual revenue, we can compute the average revenue per user (ARPU) by dividing the annual revenue by the total number of users, inclusive of both paying and non-paying users.

In the subsequent step, we’ll calculate the average revenue per paying user (ARPPU), which only includes customers that are on paid monthly subscription plans.

The ARPPU formula consists of dividing the total annual revenue by the total number of paying users, as shown below.

We can now compare the two values:

The difference between the two metrics is $90.00, indicating that the company may want to ask itself how it can convert more non-paying users into paying users. In addition, the company should consider how it can derive further revenue from its existing paying customer base. 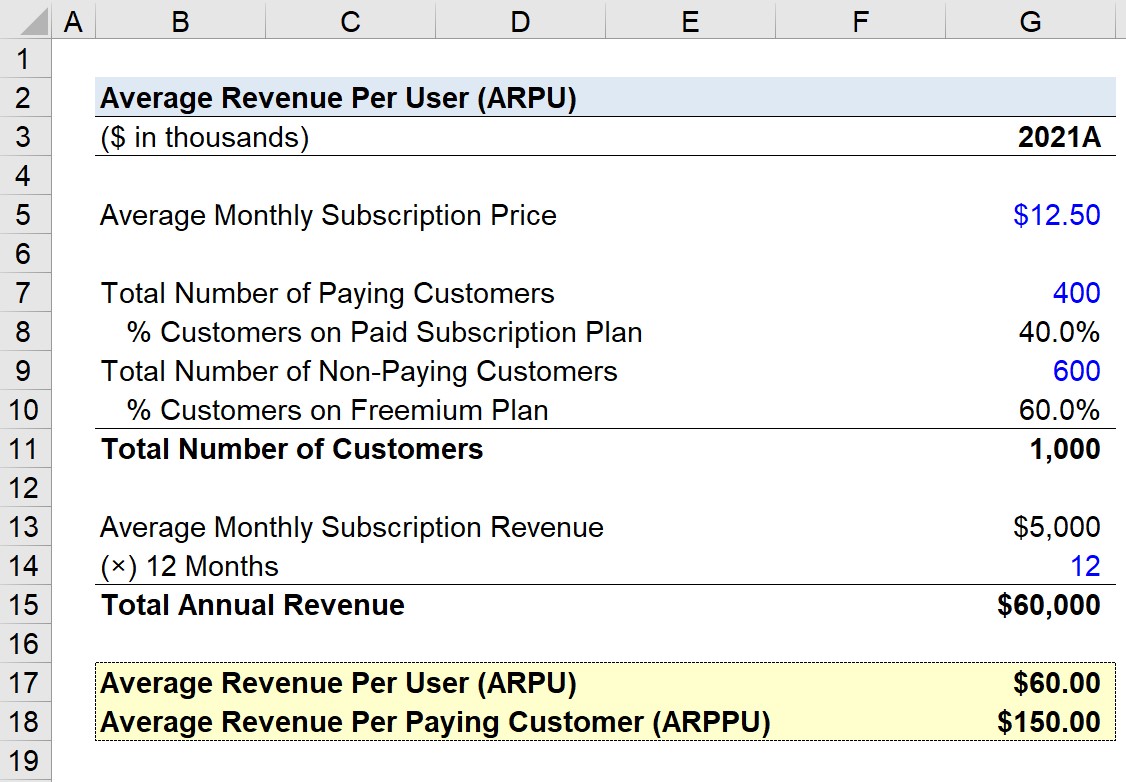 Where would you find the amount of users a company has? (e.g; Shopify)