What is Profit Margin?

A Profit Margin is a financial metric that measures the percentage of a company’s revenue that remains once certain expenses have been accounted for.

By comparing the profit metric to revenue, one can evaluate the profitability of a company after deducting certain types of expenses – which helps triangulate where a company’s expenses are concentrated (i.e. cost of goods sold, operating expenses, non-operating expenses).

How to Calculate Profit Margin (Step-by-Step)

A profit margin is defined as a financial ratio that divides a profitability metric belonging to a company by its revenue in the corresponding period.

In practice, various types of profitability metrics are utilized to measure the operating performance of a company, rather than reliance on solely one profit margin ratio.

Each type of profit margin serves a distinct purpose and when used in conjunction with the others, a far more comprehensive understanding of the underlying company can be obtained.

The chart below lists the most common profit margins used for assessing companies.

For practically all profit margins, the general “plug-in” formula is as follows.

Typically, profit margins are denoted in percentage form, so the figure must be multiplied by 100.

The operating income (or “EBIT”) represents the line on the income statement that splits core, ongoing business operations from non-operational line items.

Financing activities like interest on debt obligations are categorized as a non-operating expense because decisions on how to finance a company are discretionary to management (i.e. the decision to fund using debt or equity).

For comparative purposes, EBIT and EBITDA are used most frequently due to how the company’s operational performance is portrayed – while remaining independent of capital structure and taxes.

Profit margins that are independent of discretionary decisions such as the capital structure and taxes (i.e. jurisdiction-dependent) are most useful for peer comparisons.

When it comes to company-to-company comparisons, isolating the core operations of each company is important – otherwise, the values would be skewed by non-core, discretionary items.

In contrast, profitability metrics that are below the operating income line (i.e. post-levered) have adjusted EBIT for non-operating income/(expenses), which are classified as discretionary and non-core to the company’s operations.

For purposes of comparison among different comparable companies, the two most commonly used profit margins are:

The notable difference between the two is that EBITDA is a non-GAAP measure that adds back non-cash expenses (e.g. D&A).

In particular, depreciation and amortization represent non-cash accounting conventions used to match CapEx spend with the corresponding revenue generated under the matching principle.

Besides D&A, EBITDA can also be adjusted for stock-based compensation as well as other non-recurring charges. The adjustments are done to remove the effects of non-cash expenses and non-recurring, one-time items.

Determining whether a company’s profit margin is “good” or “bad” depends on the industry in question.

Hence, comparisons among companies operating in different industries are not recommended and are likely to lead to misleading conclusions.

On the other hand, retail and wholesale stores have low gross margins due to most of their expenses being related to:

For those looking for a more detailed breakdown of the gross margin, operating margin, EBITDA margin, and net margin metrics for different industries, NYU Professor Damodaran has a useful resource that tracks the various average profit margins by sector:

As a real-life example, we’ll look at the margin profile of Salesforce (NYSE: CRM), a cloud-based platform oriented around customer relationship management (CRM) and related applications.

In the fiscal year 2021, Salesforce had the following financials:

Given those data points, Salesforce’s gross profit is $15.8bn whereas its operating income (EBIT) is $455m.

Of the core operating costs – i.e. COGS + OpEx – the corresponding % of revenue amounts were:

Furthermore, the gross and operating margins of Salesforce in 2021 were:

As mentioned earlier, Salesforce is an example of a software company with high gross margins but with substantial operating costs, especially for sales & marketing. 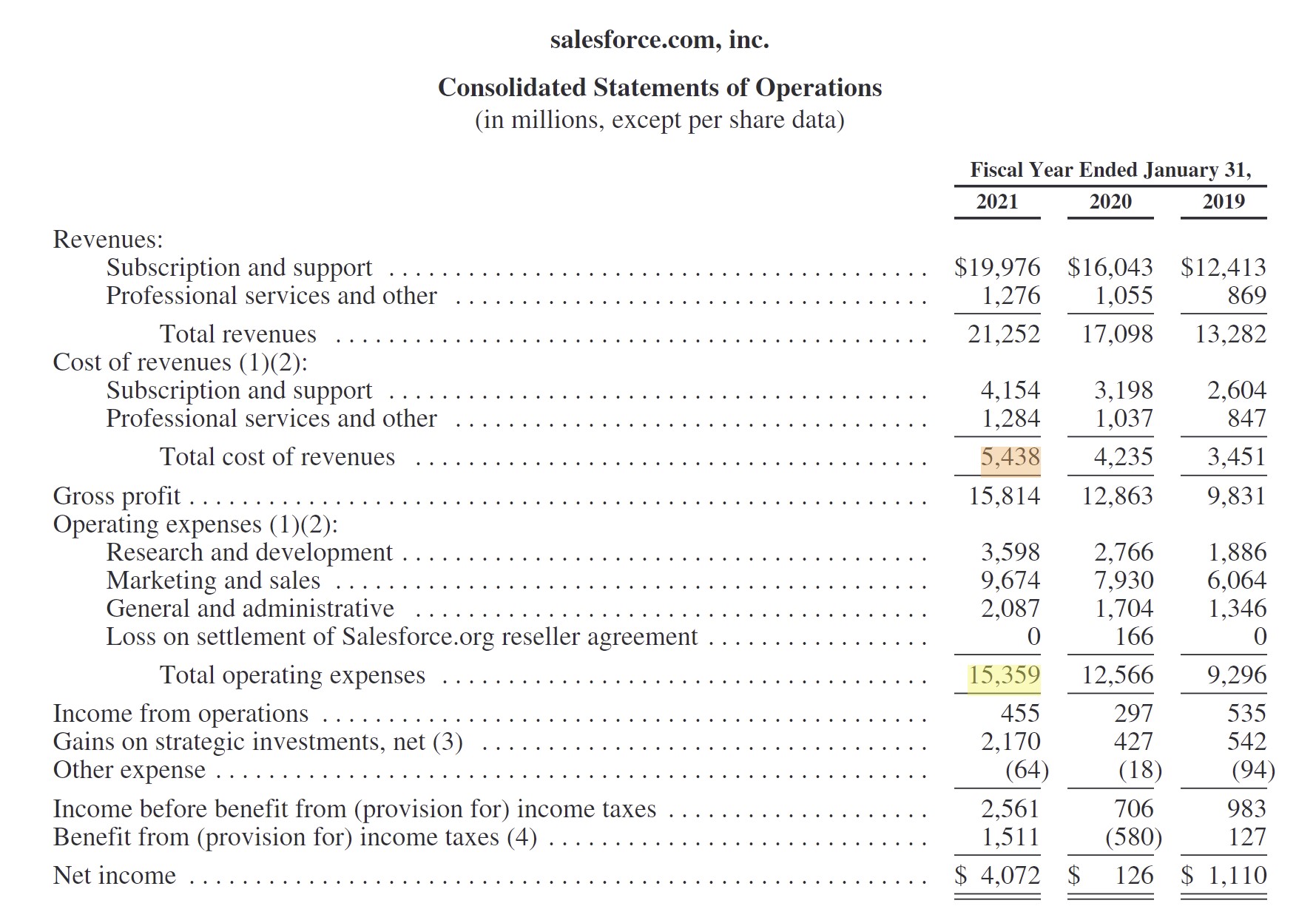 For the fiscal year 2021, Walmart had the following financial data:

Just like we did for Salesforce, the operating cost breakdown (i.e. % of revenue) is as follows:

Furthermore, the margins of Walmart were:

From our retail example, we can see how inventory and direct labor comprised the majority of Walmart’s total core expenses.

Suppose we have a company with the following last twelve months (LTM) financials.

Using those assumptions, we can calculate the profit metrics that will be part of our margin calculations.

If we divide each metric by revenue, we arrive at the following profit margins for our company’s LTM performance. 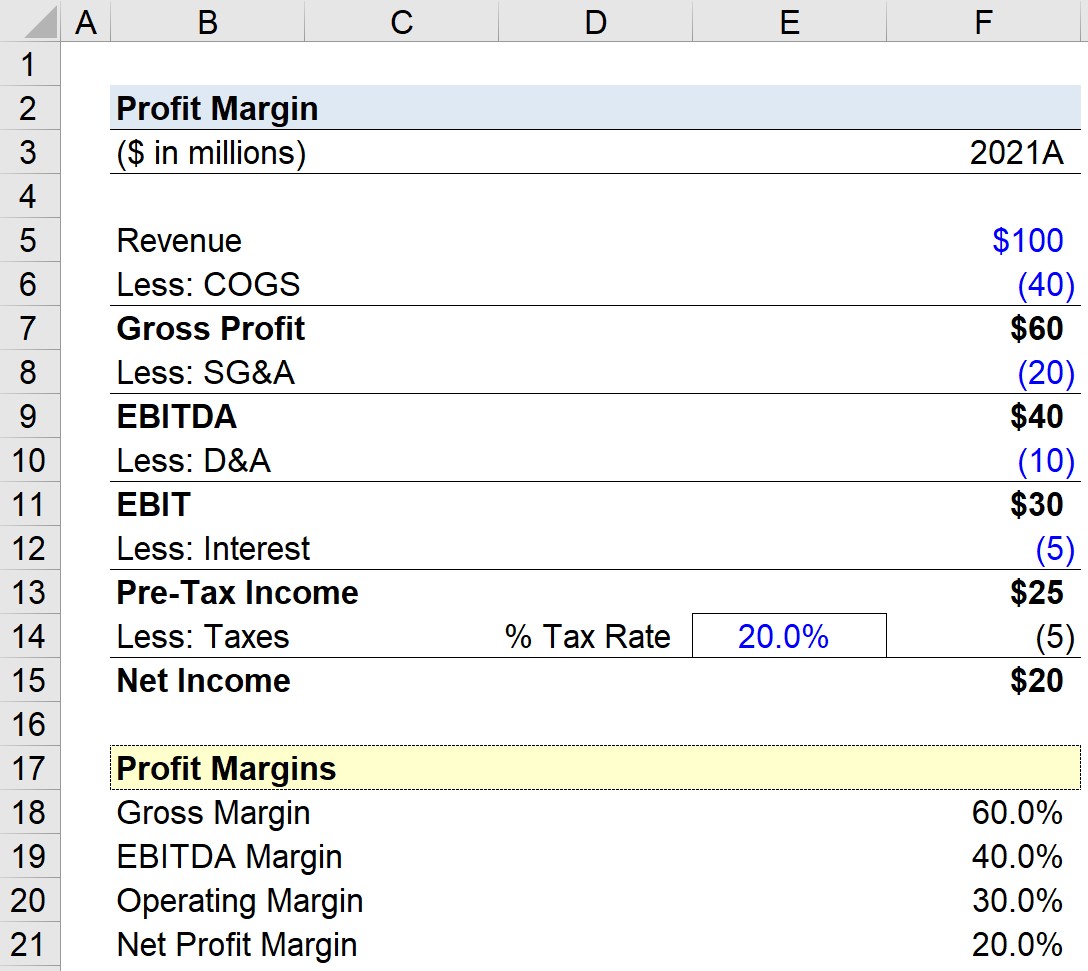