What is Gross Profit?

Gross Profit represents the earnings remaining once a company’s direct costs, i.e. cost of goods sold (COGS), have been deducted from revenue.

More specifically, the gross profit metric is the income left over after all direct expenses related to the production of a good or delivery of a service to generate sales have been subtracted from revenue.

How to Calculate Gross Profit (Step-by-Step)

On the income statement, the gross profit line item appears under the cost of goods (COGS) line, which comes right after revenue (i.e. the “top line”).

Indirect costs such as operating expenses and non-core expenses do not affect gross profit.

The formula for calculating the gross profit is as follows.

As a standalone metric, the gross income is not very meaningful, which is the reason that it must be standardized by converting it into percentage form.

The formula for the gross margin is the company’s gross profit divided by the revenue in the matching period.

The gross margin is the percentage of a company’s revenue remaining after subtracting COGS (e.g. direct materials, direct labor).

Moreover, the gross margin facilitates comparisons among industry peers and comparable companies, as well as for performing year-over-year (YoY) analyses.

Classifying a company’s gross margin as either “good” or “bad” is entirely specific to the industry that the company operates within and the related contextual details.

Generally speaking, higher gross margins are more often than not perceived positively, as the potential for higher operating margins (EBIT) and net profit margins in such cases rises.

But to reiterate, comparisons of a company’s gross margins must only be done among comparable companies (i.e. to be “apples-to-apples”).

As a real-life example, the gross margin of Apple (NASDAQ: AAPL), which refers to the dollar amount, from fiscal years 2019 to 2021 is as follows. 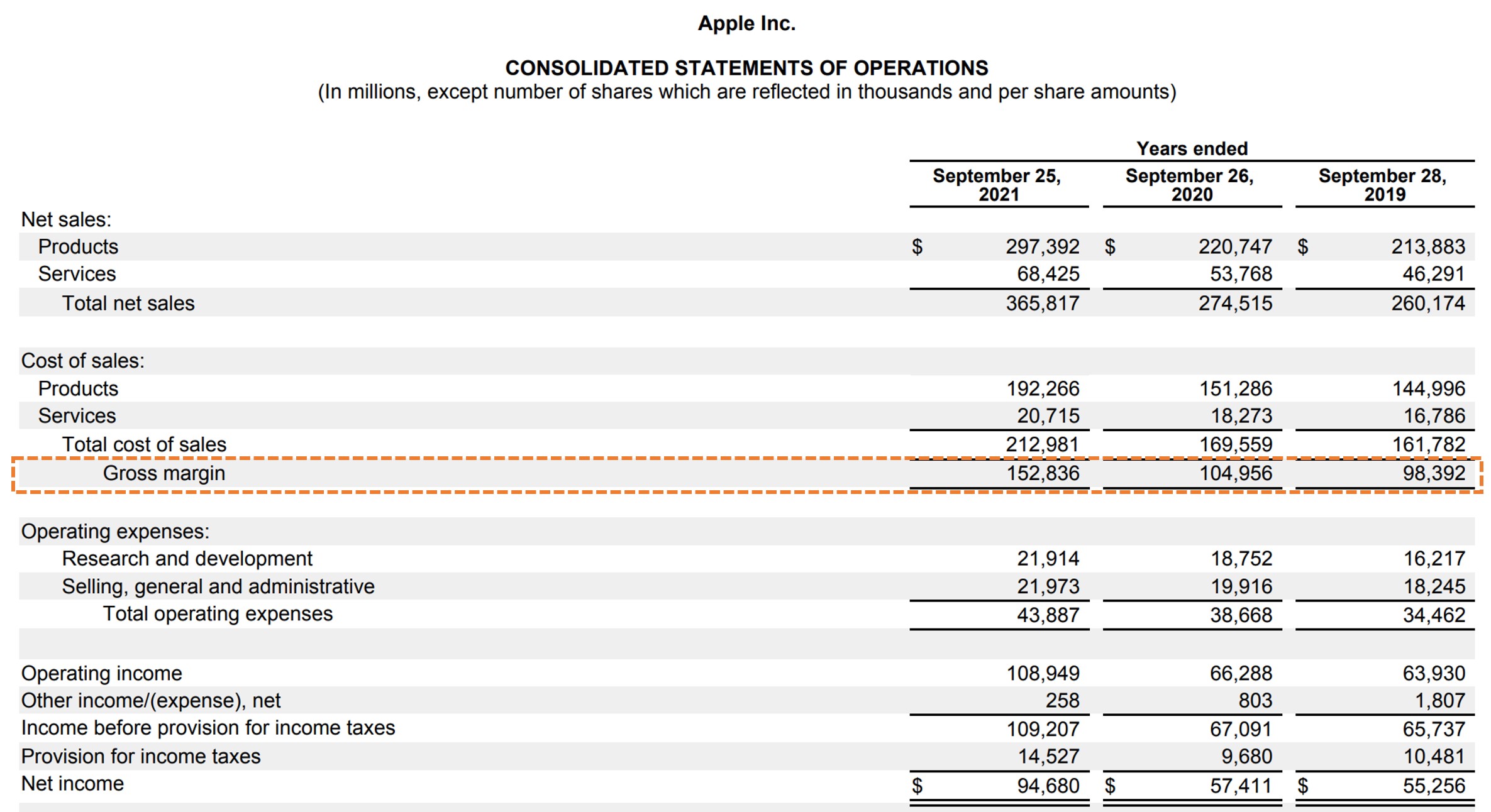 In recent years, Apple shifted its focus from hardware to software sales, especially since it has become increasingly difficult for Apple to provide a sufficient incentive for customers to upgrade to newer hardware (i.e. phone or laptop) models.

Unlike software and related services — which represent sources of recurring revenue — hardware products are one-time purchases.

Gross Profit vs. Net Income: What is the Difference?

On the other hand, the net income — i.e. the “bottom line” of the income statement — is the profit metric that accounts for all expenses, including operating expenses such as COGS and SG&A, as well as non-operating expenses like interest and taxes.

While the gross income metric only accounts for COGS, net income is a levered metric (i.e. post-debt) since it is affected by interest expense and is only attributable to shareholders that own equity stakes in the company.

One major drawback to the net income metric — other than the fact that it is a post-debt profit metric — is that net income can also be distorted by non-operating income / (expenses) such as interest income, interest expense, gains or losses of asset sales, and inventory or PP&E write-offs.

In contrast, a company’s gross profit subtracts just one outflow of cash, the direct costs associated with the core generation of revenue.

The gross income metric is thus far better suited for peer-to-peer comparisons because it is mostly unaffected by financing decisions or discretionary accounting policies (e.g. the useful life assumptions on PP&E that determine the annual depreciation expense, jurisdiction-dependent differences in the tax rate, NOLs).

In order to forecast a company’s gross profit, the most common approach is to make an assumption regarding the company’s gross margin (GM) percentage based on historical data and industry comparables.

The gross margin assumption is then multiplied by the revenue assumptions in the corresponding period.

Since that leaves the cost of goods sold (COGS) line item blank, the next step would be to subtract the projected gross income from revenue, which should result in COGS

An alternative approach is to subtract the gross margin from one to arrive at the COGS margin, i.e. COGS as a percentage of revenue.

The COGS margin would then be multiplied by the corresponding revenue amount.

Suppose we’re tasked with calculating the gross profit and gross margin of Apple (AAPL) as of its past three fiscal years.

The historical net sales and cost of sales data reported on Apple’s latest 10-K is posted in the table below.

In our model, we’ll calculate the gross profit and gross margin metrics separately for the products and services division.

The differences in gross margins between products vs. services is 32%, 35%, and 34% in the three-year time span, reflecting how services are much more profitable than physical products.

In the final part of our modeling exercise, we’ll calculate the total gross profit and gross margin of Apple, which blends the profits (and margins) of both the products and services divisions.

From 2019 to 2021, Apple’s gross margin averaged approximately 39%, but from our analysis, we know that its margins are particularly weighted down by the products division. 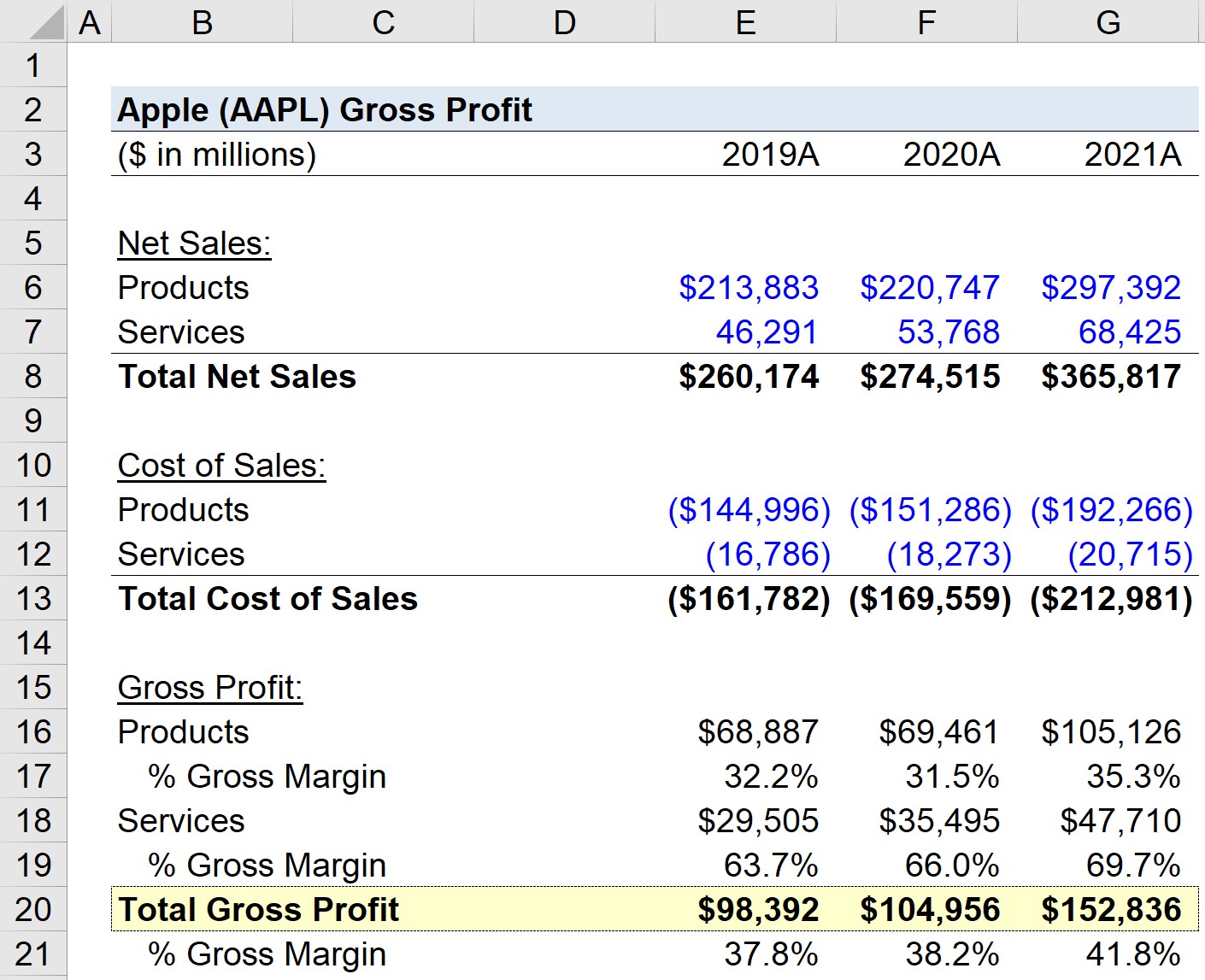