Guide to Understanding the Cost of Goods Sold (COGS)

What is Cost of Goods Sold (COGS)?

Cost of Goods Sold (COGS), otherwise known as the “cost of sales”, refer to the direct costs incurred by a company while selling its goods/services.

How to Calculate COGS (Step-by-Step)

The cost of goods sold (COGS) is the accounting term used to describe the direct expenses incurred to produce revenue.

On the income statement, the cost of goods sold (COGS) line item is the first expense following revenue (i.e. the “top line”).

The categorization of expenses into COGS or operating expenses (OpEx) is entirely dependent on the industry in question.

For instance, the “Cost of Direct Labor” is recognized as COGS for service-oriented industries where the production of the company’s goods sold is directly related to labor.

But not all labor costs are recognized as COGS, which is why each company’s breakdown of their expenses and the process of revenue creation must be assessed.

As another industry-specific example, COGS for SaaS companies could include hosting fees and third-party APIs integrated directly into the selling process. 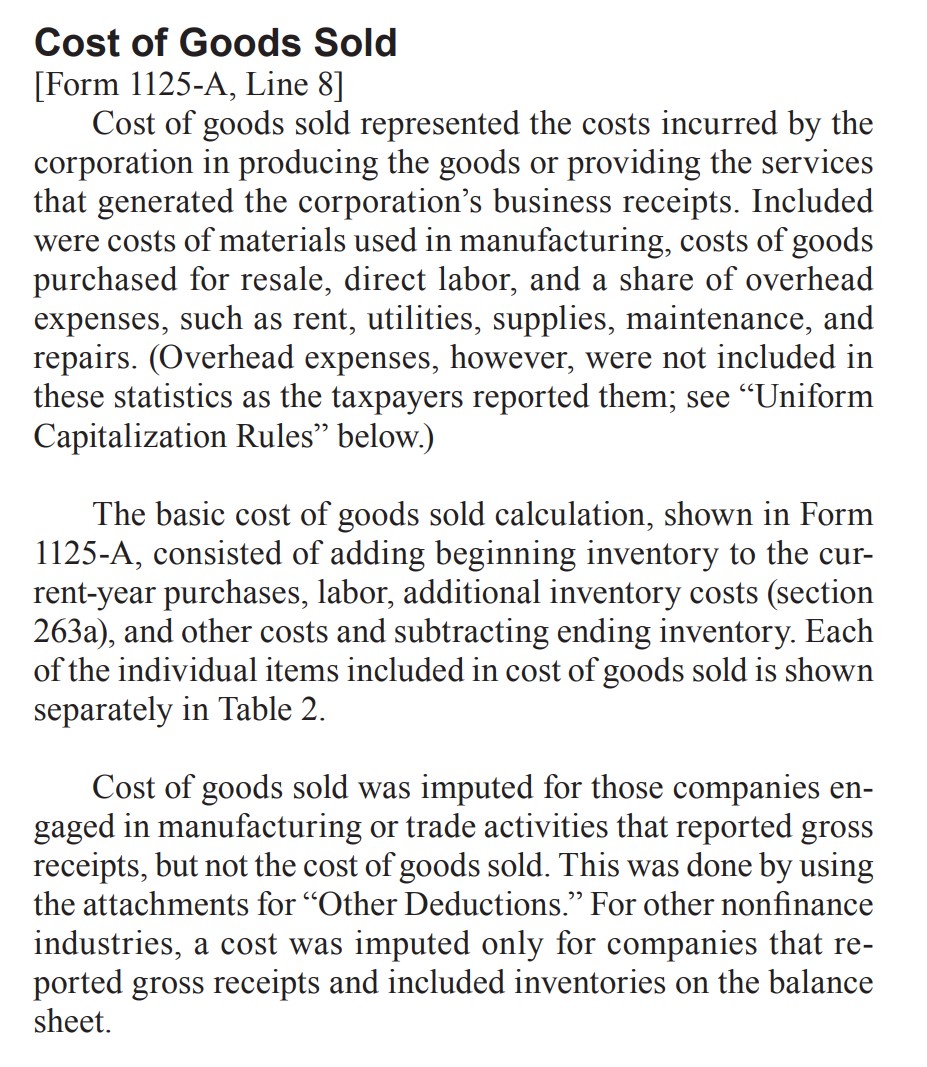 While a broad generalization, COGS tend to consist of variable costs, as the value is dependent on the production volume.

In contrast, OpEx tends to consist of fixed costs, which means the value remains relatively constant regardless of the level of production output.

For example, a company’s rental expense for a facility remains fixed based on a signed rental agreement.

For companies attempting to increase their gross margins, selling at higher quantities is one method to benefit from lower per-unit costs.

If a company orders more raw materials from suppliers, it can likely negotiate better pricing, which reduces the cost of raw materials per unit produced (and COGS).

How to Interpret Cost of Goods Sold

Calculating the COGS of a company is important because it measures the real cost of producing a product, as only the direct cost has been subtracted.

In effect, the company gets a better sense of the cost of producing the good or providing the service – and thereby can price their offerings better.

Generally speaking, COGS will grow alongside revenue because theoretically, the more products/services sold, the more must be spent for production.

But of course, there are exceptions, since COGS varies depending on a company’s particular business model.

Under the matching principle of accrual accounting, each cost must be recognized in the same period as when the revenue was earned.

For instance, just the costs associated with the inventory sold in the current period can be recognized on the income statement, which is where the LIFO vs FIFO inventory accounting methods can be a source of debate.

The calculation of COGS is distinct in that each expense is not just added together, but rather, the beginning balance is adjusted for the cost of inventory purchased and the ending inventory.

Let’s say there’s a clothing retail store that starts off Year 1 with $25 million in beginning inventory, which is the ending inventory balance from the prior year.

Throughout Year 1, the retailer purchases $10 million in additional inventory and fails to sell $5 million in inventory.

With that said, the COGS in Year 1 can be calculated with the following simple formula:

The $30 million in COGS is then linked back to the gross profit calculation, but with the sign flipped to show that it represents a cash outflow. 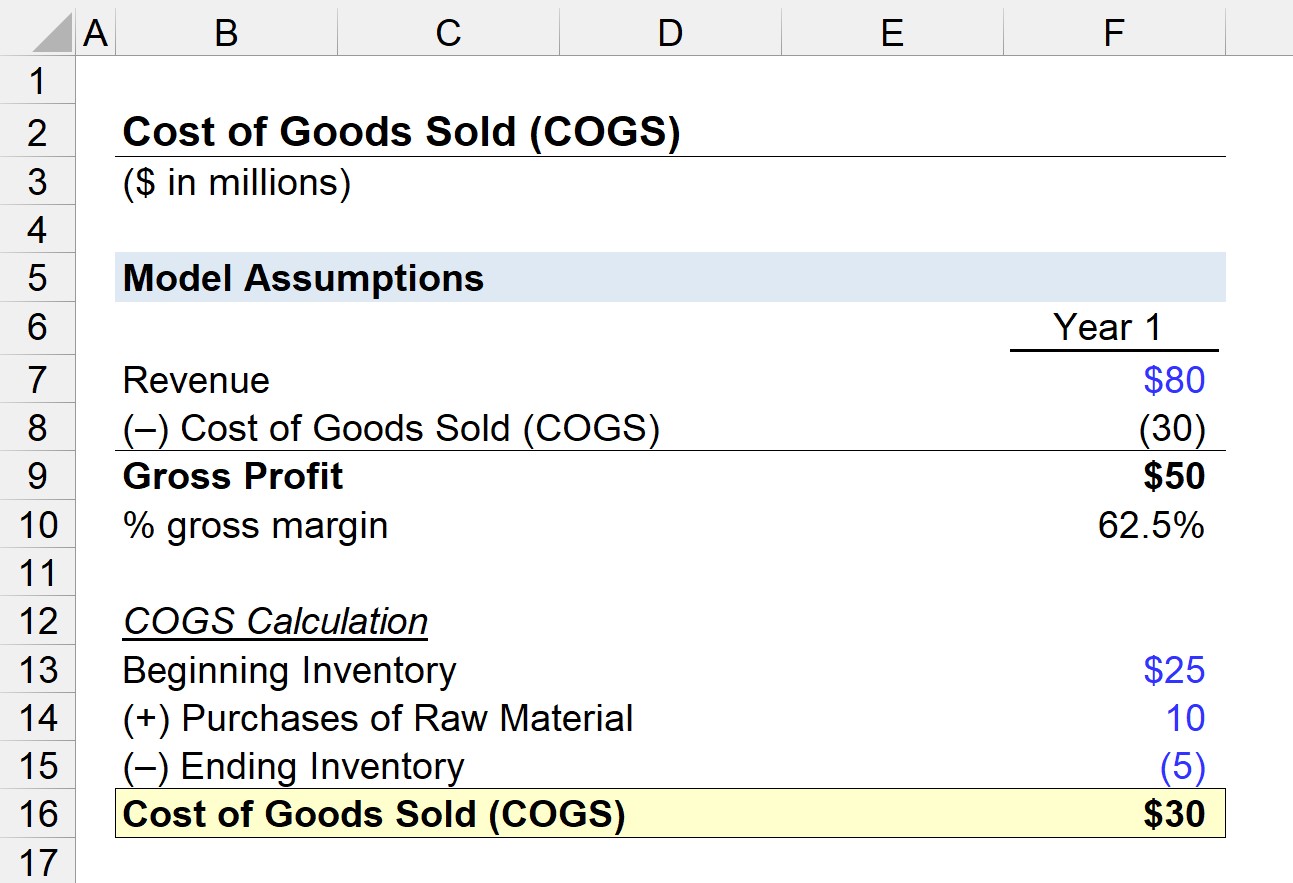 To wrap up our post on COGS, we’ll conclude with a quick explanation of one forecasting approach of COGS often seen in financial models.

Since public companies are not obligated by the SEC to disclose confidential data regarding their internal inventory data, one method is to assume a gross margin based on historical (and industry) averages.

Here in our example, we assume a gross margin of 80.0%, which we’ll multiply by the revenue amount of $100 million to get $80 million as our gross profit.

In the final step, we subtract revenue from gross profit to arrive at – $20 million as our COGS figure.

The way you broke out the formulas in this article is extremely helpful – thank you! I’d also recommend this article for those trying to understand the business impact of COGS on other metrics and the importance of accuracy of the COGS numbers: https://lucrumconsulting.com/understanding-cost-of-goods-sold-cogs/