What is Return on Ad Spend?

The Return on Ad Spend (ROAS) marketing metric measures the revenue earned for each dollar spent on advertising.

Conceptually, ROAS is practically identical to the return on investment (ROI) metric, but ROAS is specific to advertising spend.

How to Calculate Return on Ad Spend (Step-by-Step)

ROAS stands for “return on ad spend” and is a marketing metric that estimates the amount of revenue earned per dollar allocated to advertising.

The reason marketing agencies pay such close attention to ROAS is that it measures the cost-effectiveness of their advertising campaigns and related spending.

Measuring the performance and analytics of an ad campaign is an integral component of a successful business model.

By A/B testing different advertising strategies, companies can figure out which strategy is most profitable and is most suitable for their target customer base.

The more effective a company’s advertising message is able to connect with its target market, the more revenue will be earned from each dollar of ad spend.

That said, the higher a company’s ROAS, the better off it is in terms of profitability.

On the other hand, ad campaigns with low ROAS might require adjustments to identify why the market appears to be less receptive.

To further derive more insights from ROAS, the metric can be calculated on an individual basis across different campaigns, ad platforms, or specific ads.

How to Interpret Return on Ad Spend (ROAS)

Before running an ad campaign, the company must determine the minimum threshold for its ROAS.

The minimum threshold is specific to the company, as all companies have different cost structures and expenses.

However, a widely referenced benchmark for an “acceptable” ROAS is a 4:1 ratio.

From the ad spend, the company generates $4 in revenue for each $1 of ad spending.

In an example scenario, this means that if a company were to invest $20,000 into its ad campaign and generate $80,000 in revenue as a result of those ad campaigns, the ROAS is 4:1.

However, all companies are unique, and the minimum ROAS to be profitable could be as high as 10:1 or as low as 2:1 – so the same criteria cannot be applied to all companies.

The ROAS formula is the ratio between the revenue earned from conversions (i.e. sales) related to running advertising campaigns.

The ad spend can comprise of just the platform fees, as well as minor fees such as the following:

For the first ad campaign (A), the conversion revenue generated throughout the year was $2 million.

With regards to the coinciding ad spend, the platform fees were $400k, while the salary and affiliate costs were each $50k.

In comparison, the other ad campaign brought in more revenue at 5 million.

However, the fees incurred were much higher too, with the platform fees being $2 million, salary costs of $400k, and affiliate costs of $100k.

Therefore, by dividing the conversion revenue by the total ad spend in the corresponding ad campaign, the ROAS can be calculated.

Despite the second ad campaign bringing in more revenue, the first ad campaign (A) appears to be more efficient at generating revenue with less spending.

As a result, the company may consider attempting to scale the strategy used in the first ad campaign.

However, in reality, there are many other important factors to consider.

In particular, the growth in fees and costs must also be considered for scaling the first campaign, since it is possible that the costs and conversion revenue do not move proportionally (i.e. linearly). 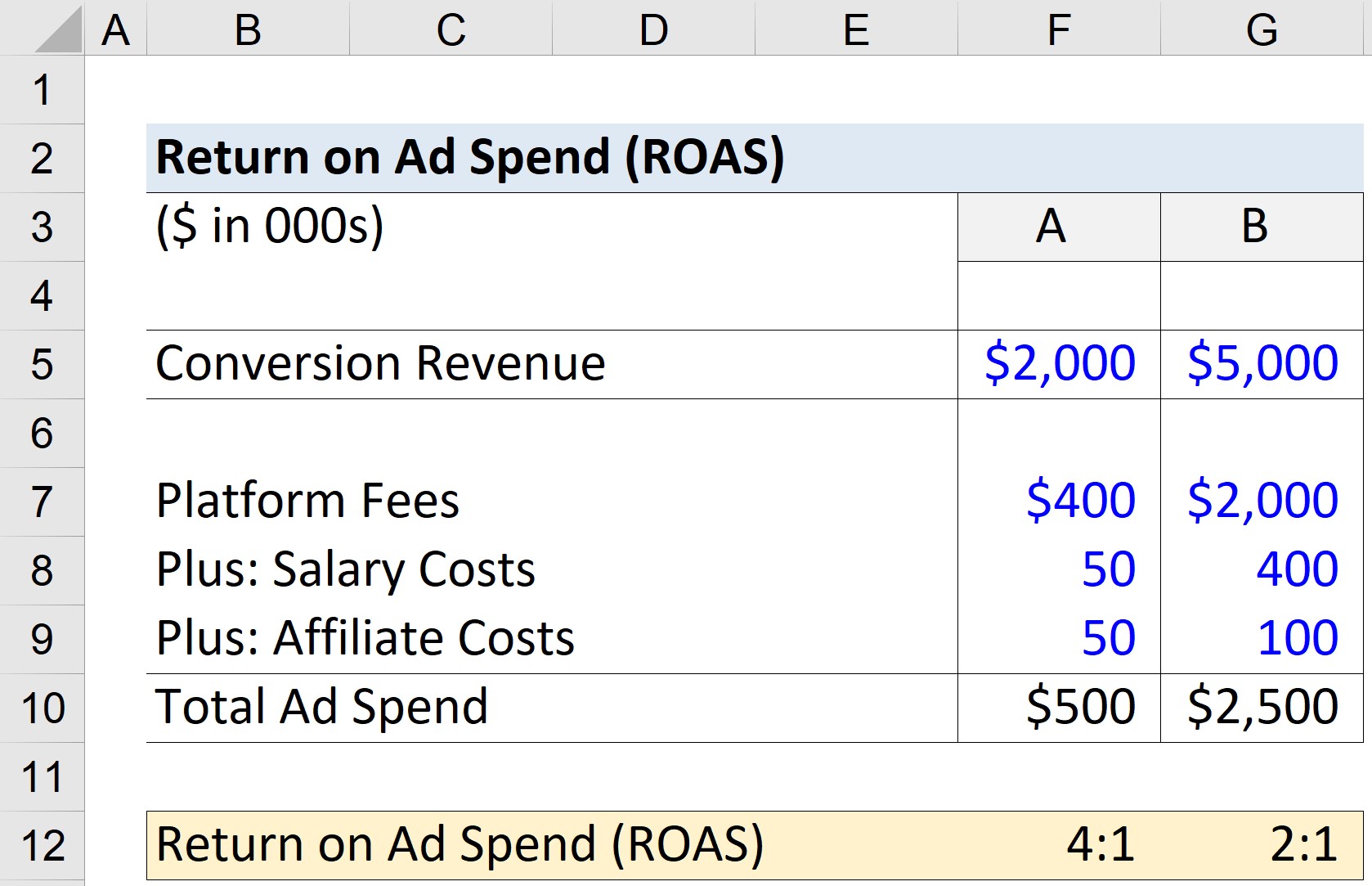