What is the Capital Intensity Ratio?

The Capital Intensity Ratio describes a company’s level of reliance on asset purchases in order to sustain a certain level of growth.

How to Calculate the Capital Intensity Ratio

Capital intensity measures the amount of spending on assets necessary to support a certain level of revenue, i.e. how much capital is needed to generate $1.00 of revenue.

If a company is described as “capital intensive,” its growth is implied to require substantial capital investments, whereas “non-capital-intensive” companies require less spending to create the same amount of revenue.

Common examples of capital assets can be found below:

What is Capital Intensity?

How to Interpret the Capital Intensity Ratio

Capex is the purchase of long-term fixed assets, i.e. property, plant & equipment (PP&E), while depreciation is the allocation of the expenditure across the useful life assumption of the fixed asset.

Net working capital (NWC), the other type of reinvestment besides CapEx, determines the amount of cash tied up in day-to-day operations.

Simply put, the capital intensity ratio is the amount of spending required per dollar of revenue generated.

The formula for calculating the capital intensity ratio consists of dividing the average total assets of a company by its revenue in the corresponding period.

Suppose that a company has $1 million in revenue during Year 1.

From we equation below, we can see that the capital intensity ratio comes out to 0.5x.

The 0.5x capital intensity ratio implies that the company spent $0.50 to generate $1.00 of revenue. 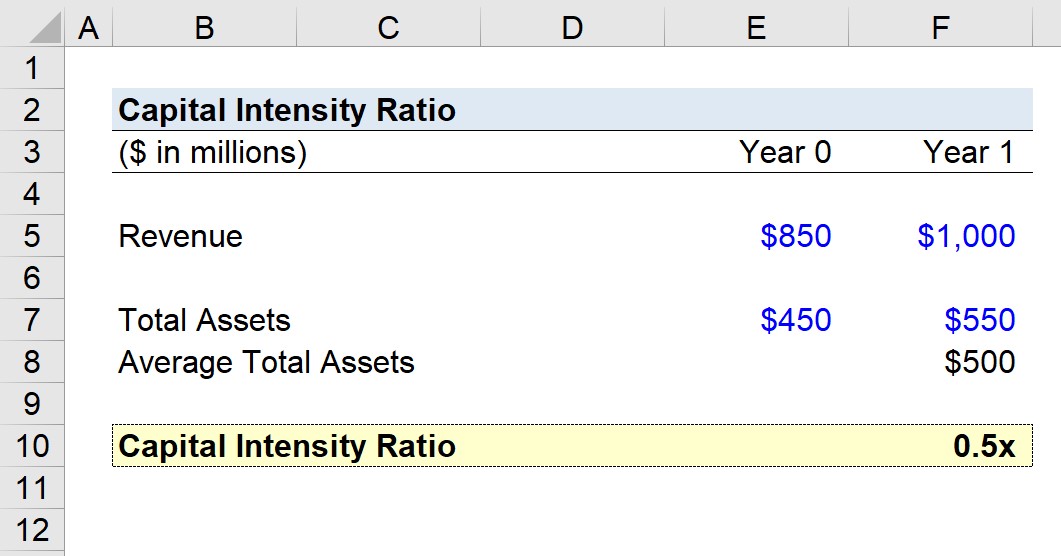 The capital intensity ratio and asset turnover are closely related tools for gauging how efficiently a company can utilize its asset base.

The capital intensity ratio and total asset turnover can be calculated using only two variables:

The total asset turnover measures the amount of revenue generated per dollar of assets owned.

Generally, a higher asset turnover is preferred since it implies more revenue is generated for each dollar of an asset.

If we use the same assumptions as our earlier example, the total asset turnover comes out to 2.0x, i.e. the company generates $2.00 in revenue for each $1.00 in assets.

While a higher figure is preferred for the total asset turnover, a lower figure is better for the capital intensity ratio since less capital spending is needed.

All else being equal, companies with higher capital intensity ratios relative to that of industry peers are more likely to have lower profit margins from the greater spending.

In contrast, a non-capital-intensive company spends relatively less for its operations to continue generating revenue.

Labor costs are typically the most significant cash outflow for non-capital intensive industries rather than capex.

Another method to estimate a company’s capital intensity is to divide capex by the total labor costs.

There is no set rule on whether a high or lower capital intensity ratio is better, as the answer depends on the circumstantial details.

For example, a company with a high capital intensity ratio could be suffering from low-profit margins, which are the byproduct of inefficient utilization of its asset base — or the general line of business and industry could just be more capital intensive.

Hence, comparing the capital intensity ratio of different companies should only be done if the peer companies operate in the same (or similar) industry.

If so, companies with a lower capital intensity ratio are most likely more profitable with more free cash flow (FCF) generation since more revenue can be generated with fewer assets.

But to reiterate, an in-depth evaluation of the companies’ unit economics is necessary to confirm if the company is, in fact, more efficient.

Asset-light industries can be preferable given the reduced capital spending requirements to sustain and increase revenue growth.

Yet capital intensity can function as a barrier to entry that deters entrants that stabilizes their cash flows, as well as their current market share (and profit margins).

From the perspective of new entrants, a significant initial investment is necessary to even begin to compete in the market.

Considering the limited number of companies in the market, incumbents possess more pricing power over their customer base (and can fend off competition by offering lower prices that unprofitable companies cannot match).