Return on Equity (ROE) measures the net profits generated by a company based on each dollar of equity investment contributed by shareholders.

Typically expressed in percentage form, the ROE metric can be a very useful tool to gauge a management team’s capital allocation decisions and ability to drive shareholder value creation.

How to Calculate ROE

The term ROE stands for Return on Equity, and the metric represents how profitable the company has been taking into account the contributions of its shareholders.

The ROE metric answers the question:

ROE conveys the percentage of investor capital on a dollar basis that was converted into net income, which helps show how efficiently the company handles the equity capital provided to them.

The formula used to calculate the return on equity (ROE) metric is relatively straightforward, as it divides net income by the average shareholders’ equity balance in the prior and current period.

Hypothetically, if all the assets belonging to the company were to be liquidated and used to pay off all outstanding liabilities, the remaining value left would represent the shareholder’s equity, as the equity claims are the bottom of the pecking order.

While the shareholders’ equity balance can be found directly on the balance sheet, it can also be calculated by subtracting the company’s liabilities from its assets.

The average net income is used in the formula because the income statement tracks a period of time (e.g. quarter, fiscal year), while the balance sheet is the outstanding balance of different types of line items at a particular point in time (i.e. a “snapshot”).

Return on Equity and Capital Raising

In particular, the ROE is an important metric to track for existing and prospective investors, as they would want to confirm how efficiently a company can use its money to create income post-investment – and how reliable management’s decision-making is.

Companies with a higher return on equity (ROE) over the long run are far more likely to be profitable from the proper allocation of capital, but also because of the ability to raise capital from outside investors if needed.

The optionality to be able to raise capital is applicable to all companies and a trait that investors seek in potential investments (and the management team). It represents proof of a company’s ability to put capital to use efficiently and execute thoughtful strategic decisions.

Therefore, the fact the company requires fewer funds to produce more output can lead to more favorable terms, especially in the case of early-stage companies and start-ups.

When investors provide capital to companies, they are also investing in the ability of management to spend their capital on profitable projects, without wasting the capital or using it for their own benefit.

How to Interpret ROE

The return on equity (ROE) metric provides useful insights into how efficiently existing and new equity invested into the company is being utilized.

Note the net income value should be taken prior to any issuance of dividends to common shareholders as those payments impact the return to common equity shareholders. Meanwhile, the preferred dividends, which receive debt-like treatments, should be deducted from net income.

While a higher ROE is nearly always a positive sign, peer comparisons must be made among comparable companies in the same or similar industry followed by in-depth analysis in order to identify the real drivers of the value.

Limitations of Return on Equity

ROE cannot be used as a standalone metric, as it is prone to be affected by discretionary management decisions as well as one-time events.

For instance, share buybacks could cause the shareholders’ equity balance to decrease – and the lower denominator can cause there to be an “artificial” increase in ROE.

The issuance of dividends to preferred shareholders also has a similar impact, as preferred dividends come straight out of retained earnings and reduce the earnings retention rate.

One-time, non-recurring events can also cause ROE to be misleading, such as a significant inventory write-down. The result would be a lower net income from the expense recognized on the income statement, but only in the year that the write-down is formally charged.

The net impact of the write-down can cause the shareholders’ equity balance to fall, which offsets the expense and can create the false illusion that there had been improvements in the company’s return to shareholders.

There are many reasons why a company’s ROE may beat the historical average or fall short of it. For that reason, investors will also often look at complementary metrics to help understand the full picture of the business.

The return on equity (ROE) formula, if broken down further, can be segmented into three distinct parts:

One noteworthy consideration of the return on equity (ROE) metric is that the issuance of debt capital is not reflected, since only equity is captured in the metric.

In effect, whether a company has excessive debt on its B/S, is opting to raise risky debt rather than equity, or generates more profits using funds from debt lenders are not reflected in the ROE metric.

Instead, one could easily misinterpret an increasing ROE as the company producing more profits using less equity capital, without seeing the full picture (i.e. reliance on debt).

The more debt a company has raised, the less equity it has in proportion, which causes the ROE ratio to increase.

If there is an all-equity financed company, its ROE and ROA is going to be equal – i.e. the balance sheet equation states that “Assets = Liabilities + Shareholders’ Equity”. But if the company were to raise debt for the very first time, the net impact would be a positive increase to ROE (i.e. ROE > ROA) due to the increased cash balance, which causes the total assets side to rise.

How Leverage Impacts Return on Equity

To provide a brief example showing how leverage can cause ROE to be misleading, imagine there are two companies with the same amount of assets and net income, but different capital structures.

Both companies have $1bn in total assets and $240m in net income.

To summarize, the first company shows a higher ROE, but this is due to its higher level of debt, not greater operating efficiency. In fact, the company with the higher ROE might even be suffering too large of a debt burden that is unsustainable and could lead to a potential default on debt obligations.

In our modeling exercise, we’ll be calculating the return on equity (ROE) for two different companies, Company A and Company B.

The two companies have virtually identical financials, with the following shared operating values as listed below.

Each year, net income is growing by $2m for both companies, so net income reaches $28m by the end of the forecast in Year 5.

However, the differences that cause the ROE of the two companies to diverge are related to discretionary corporate decisions.

In the final step, we’ll calculate the return on equity (ROE) by dividing the “Net Income to Common” line item by the average between the prior and current period “Total Shareholders’ Equity”.

The issuance of $5m in preferred dividends by Company A decreases the net income attributable to common shareholders.

Across the same time span, Company B’s ROE increases from 15.9% to 20.2%, despite the fact that the amount of net income generated was the same amount.

Given the decision by Company B to repurchase $25m worth of shares each year, which is captured in the “Treasury Stock” line item as a contra-equity account, the total shareholders’ equity is lower in comparison to Company A.

By the end of Year 5, the total amount of shares bought back by Company B has reached $110m. And the “Total Shareholders’ Equity” account balance is $230m for Company A, but $140m for Company B.

In effect, the “Net Income to Common” for Company A in Year 5 is $23m while it is $28m for Company B in the same period.

In conclusion, the ROE metric can be an informative metric for investors in assessing management’s ability to efficiently put investor capital to use in order to achieve excess profits (and increased returns).

But the return on equity (ROE) metric should not be used as a standalone metric due to its many drawbacks.

Corporate capital allocation decisions unrelated to core operations (e.g. preferred dividends, share repurchases) can significantly impact the ROE – thus, ROE should be used in conjunction with other metrics such as ROA, ROIC, and EPS growth in order to evaluate the actual financial health of a company. 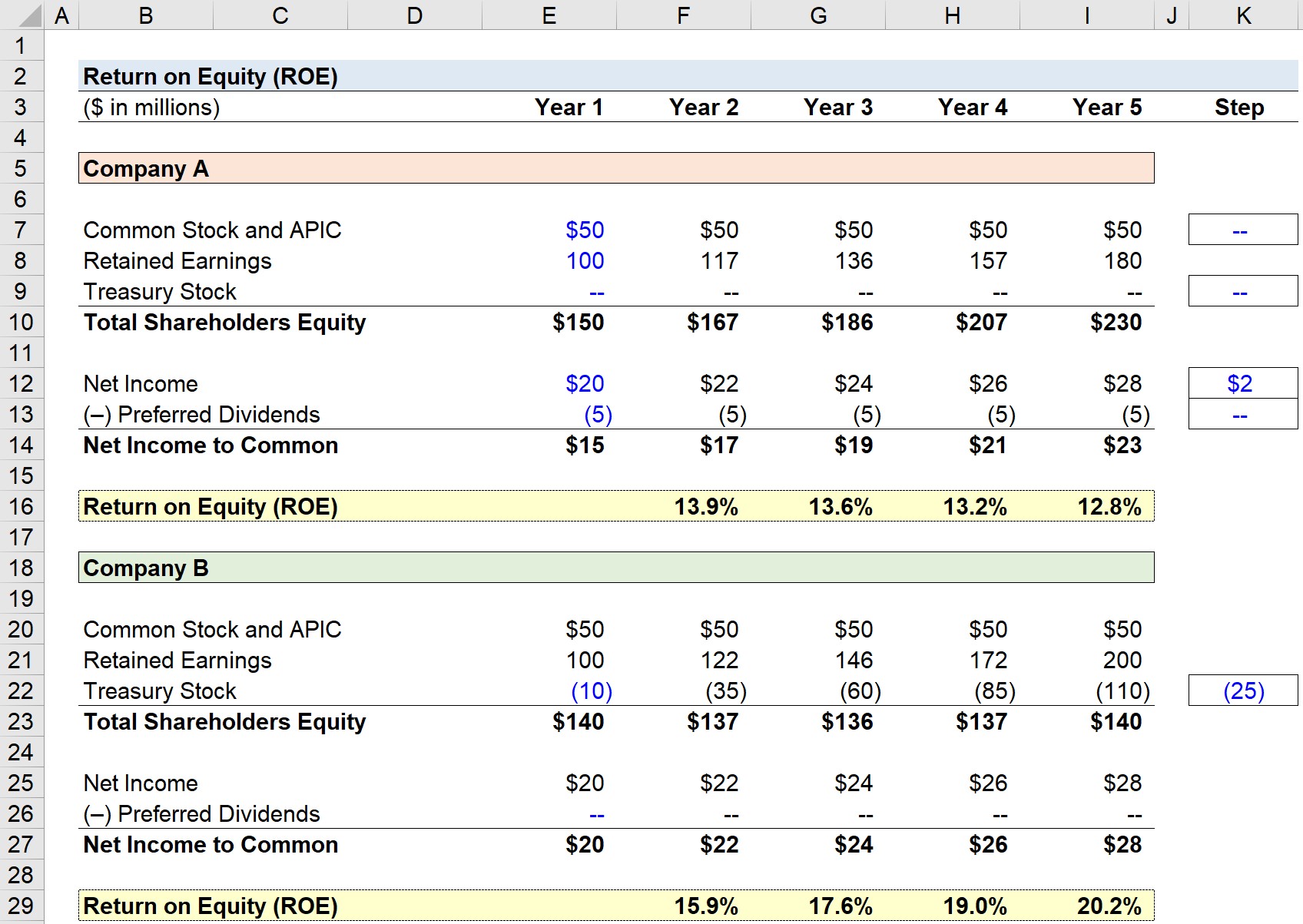