What is Accounts Payables Turnover?

The Accounts Payables Turnover ratio measures how often a company repays creditors such as suppliers on average to fulfill its outstanding payment obligations.

As part of the normal course of business, companies are often provided short-term lines of credit from creditors, namely suppliers.

The accounts payable turnover, or “payables turnover”, is a ratio used to evaluate how quickly a company repaid those that offered them a line of credit, i.e. the frequency at which a company pays off its accounts payable balance.

The “Supplier Credit Purchases” refers to the total amount spent ordering from suppliers.

The total supplier purchase amount should ideally only consist of credit purchases, but the gross purchases from suppliers can be used if the full payment details are not readily available.

Moreover, the “Average Accounts Payable” equals the sum of the beginning of period and end of period carrying balances, divided by two.

The formula for calculating the accounts payable turnover is as follows.

In short, the A/P turnover answers:

For example, if a company’s A/P turnover is 2.0x, then this means it pays off all of its outstanding invoices every six months on average, i.e. twice per year.

So the higher the ratio, the more frequently a company’s invoices owed to suppliers are fulfilled.

DPO counts the average number of days it takes a company to pay off its outstanding supplier invoices for purchases made on credit.

The more a supplier relies on a customer, the more negotiating leverage the buyer holds – which is reflected by a higher DPO and lower A/P turnover.

The A/P turnover ratio and the DPO are often a proxy for determining the bargaining power of a specific company (i.e. their relationship with their suppliers).

Companies like Amazon and Walmart extend their payables outstanding for that reason, i.e. their branding, reputation, and order volume (and size) can all be leveraged to defer supplier payments.

From the date when the credit purchase was made to the date that the company actually paid the supplier in cash, the cash remains in the possession of the buyer, who has the discretion to spend that cash in the meantime (e.g. to reinvest into operations, for capital expenditures).

How to Interpret Payables Turnover Ratio

The rules for interpreting the accounts payable turnover ratio are less straightforward.

For instance, if a company’s accounts receivable turnover is far above that of its peers, there could be a reasonable explanation – however, it is rarely a positive sign, i.e. it typically implies the company is inefficient in its ability to collect cash payments from customers.

But in the case of the A/P turnover, whether a company’s high or low turnover ratio should be interpreted positively or negatively depends entirely on the underlying cause.

In the latter scenario, the company is facing a shortage in liquidity (i.e. low cash on hand), a red flag that could potentially result in the company being in urgent need of restructuring or filing for bankruptcy protection.

The company’s A/P turned four times in Year 1, meaning that its suppliers were repaid each quarter on average.

Given the A/P turnover ratio of 4.0x, we will now calculate the days payable outstanding (DPO) – or “accounts payable turnover in days” – from that starting point.

The 91 days represents the approximate number of days on average that a company’s invoices remain outstanding before being paid in full. 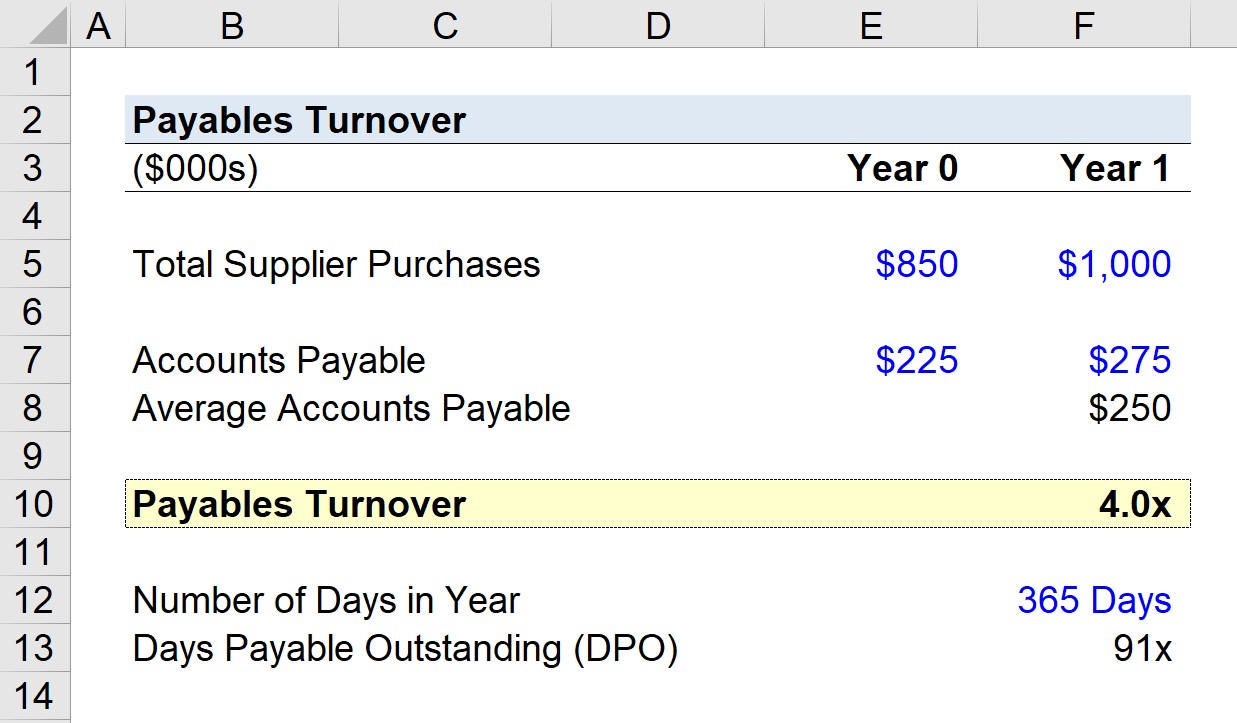