What is an Activity Ratio?

Activity Ratios, or asset utilization ratios, are measures of a company’s operating efficiency, specifically with regard to managing its assets.

How to Calculate Activity Ratios

The efficiency at which a company utilizes its assets can be measured by activity ratios.

An activity ratio is an indicator of how efficient a company is at asset allocation, with the goal of deriving as much revenue as possible with the least amount of resources.

One can gauge a company’s ability to manage its current assets such as inventory and accounts receivable as well as fixed assets (PP&E) to generate more revenue.

Therefore, by comparing the two sides — revenue and an asset metric — each “turnover” ratio measures the relationship between the two and how they trend over time.

Each activity ratio consists of revenue in the numerator and then a measure of an asset(s) in the denominator.

As a general rule of thumb, the higher the turnover ratio, the better — since it implies the company can generate more revenue with fewer assets.

The majority of companies closely track their accounts receivable (A/R) and inventory trends; hence, these accounts are frequently used in the denominator of activity ratios.

While there are numerous variations of activity ratios such as the accounts receivable turnover ratio and inventory turnover ratio, the shared purpose of each ratio is to determine how well a company can utilize its operating assets.

An improvement in activity ratios tends to correspond with higher profit margins, since more value is extracted from each asset.

Some of the more common ratios are:

Both activity ratios and profitability ratios should be analyzed to determine a company’s financial health.

Using the assumptions provided, we can first calculate the total asset turnover ratio in Year 1 by dividing the current revenue by the average between the current and prior period total asset balance.

In the subsequent steps, we can repeat the process for the fixed asset turnover and the working capital turnover — with the denominator as the only changing variable.

Starting from Year 0 to the end of the forecast period in Year 5, the following changes occur:

Interpreting the changes is predicated on the industry that our company operates in, as well as other company-specific factors that are beyond the scope of our simple modeling exercise.

However, based on the limited information available, our company’s “top line” revenue is growing by $20m each year while its cash balance is increasing by $5m.

Furthermore, A/R and inventory — metrics that measure the amount of cash tied up in operations — are declining each year, which implies the company is collecting cash payments from customers that paid on credit and clearing out inventory faster.

On the other side of the balance sheet, the increasing accounts payable balance can be perceived as a positive trend signifying increased negotiating leverage over suppliers (i.e. suppliers allowing for days payable outstanding to extend). 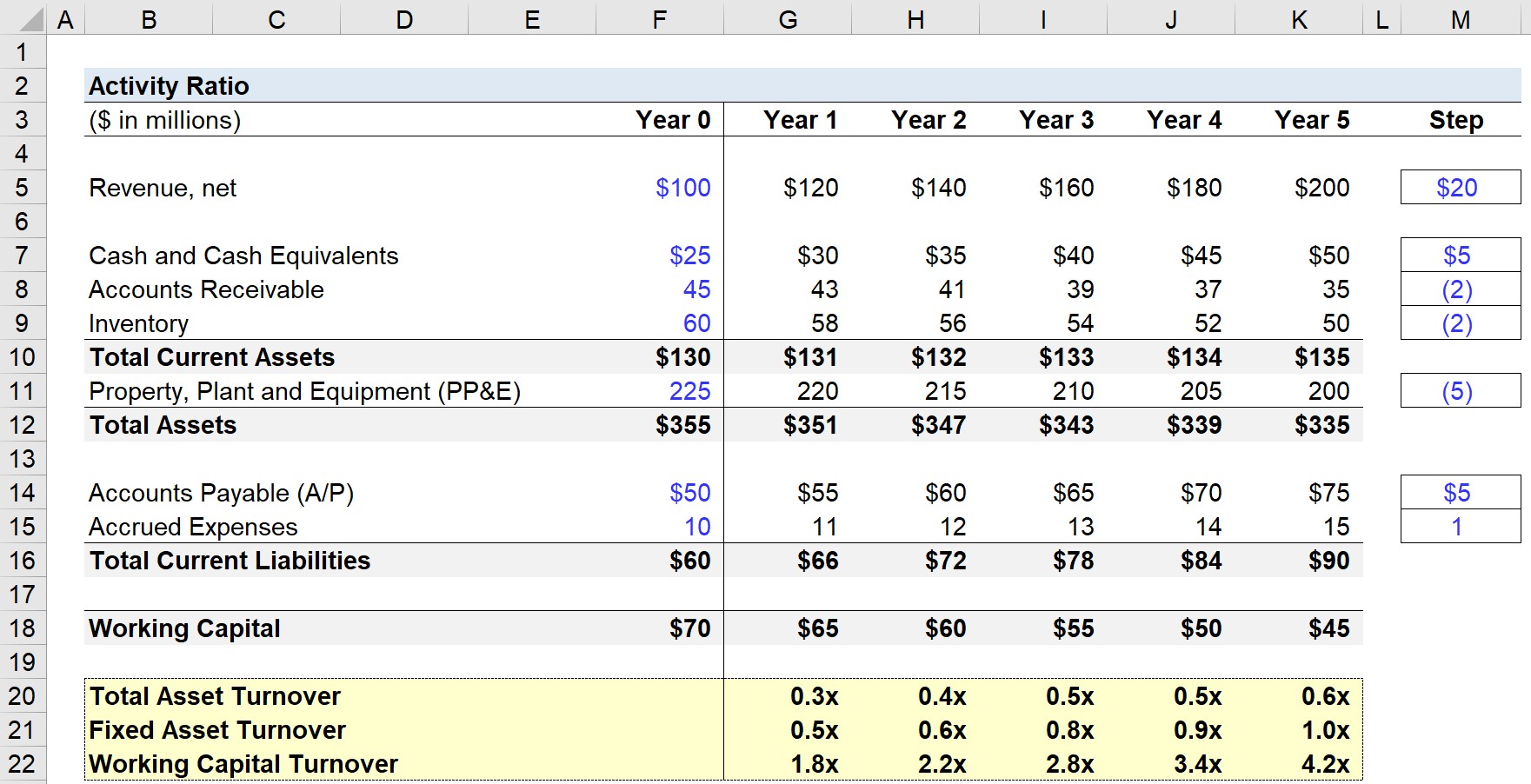