The Adjusted Present Value (APV) is defined as the sum of the present value of a project assuming solely equity financing and the PV of all financing-related benefits.

How to Calculate APV (Step-by-Step)

Since the additional financing benefits are taken into account, the primary benefit of the APV approach is that the economic benefits stemming from financing and tax-deductible interest expense payments (e.g. the “interest tax shield”) are broken out.

By discounting the projected free cash flows (FCFs) to the firm at the unlevered cost of capital – i.e. the cost of equity – the value of the unlevered firm can be estimated.

The interest tax shield can be calculated by multiplying the interest amount by the tax rate.

The APV approach allows us to see whether adding more debt results in a tangible increase (or decrease) in value, as well as enables us to quantify the effects of debt.

Note that since the APV is based on the present-day valuation, both the unlevered firm value and the financing effects must be discounted back to the current date.

The formula for computing the adjusted present value (APV) is as follows.

The APV approach shares many similarities to the DCF methodology, however, the major difference lies in the discount rate (i.e. the weighted average cost of capital).

Unlike the WACC, which is a blended discount rate that captures the effect of financing and taxes, the APV attempts to unbundle them for individual analysis and view them as independent factors.

The WACC of a company is approximated by blending the cost of equity and after-tax cost of debt, whereas APV values the contribution of these effects separately.

But despite providing a handful of benefits, APV is used far less often than WACC in practice, and it is predominantly used in the academic setting.

First, let’s list out the assumptions we’ll be using in this hypothetical scenario.

For the cash flow assumptions, assume the project generates the following values:

As for the tax rate, discount rate, and terminal value assumptions, the following assumptions are going to be used:

From our financials, we know that in Year 0, the FCF is $25m while the forecasted years are kept constant at $200m. To discount each of the FCFs to the present day, we’ll use the following formula:

For example, the following formula is used for discounting Year 1’s FCF.

Once this process is repeated for each period, we can take the sum of all of the PV of FCFs, which comes out to $696m.

Then, we’ll estimate the terminal value (TV) – the lump sum value of the project at the end of the explicit forecast period – by using the formula below:

But recall that the APV calculation is as of the present date, thus we must discount this TV amount to the present.

To wrap up the 1st part of our APV calculation, the only remaining step is to add the PV of Stage 1 FCFs and PV of TV:

Now, onto the 2nd stage of our APV calculation. The following interest expense values are going to be assumed to estimate the interest tax shield.

From the list above, we can see the interest expense is reducing down by $8m each year until reaching $0m in Year 5. As a result, there will be no debt assumed heading into the terminal value period.

To discount each of the interest tax shield amounts, we’ll do the following two steps:

The PV of the interest tax shield can be calculated by discounting the annual tax savings at the pre-tax cost of debt, which we are assuming to be 10% in our example.

Upon doing so, we get $32m as the sum of the PV of the interest tax shield.

For more complex models, we’d recommend using the “MIN” function in Excel to make sure that the interest tax shield value does NOT exceed the value of the taxes paid in the relevant period.

In conclusion, we have our two inputs for calculating the APV.

By adding the two together, we compute the adjusted present value (APV) as $1.95bn. The finished output sheet has been posted below for reference. 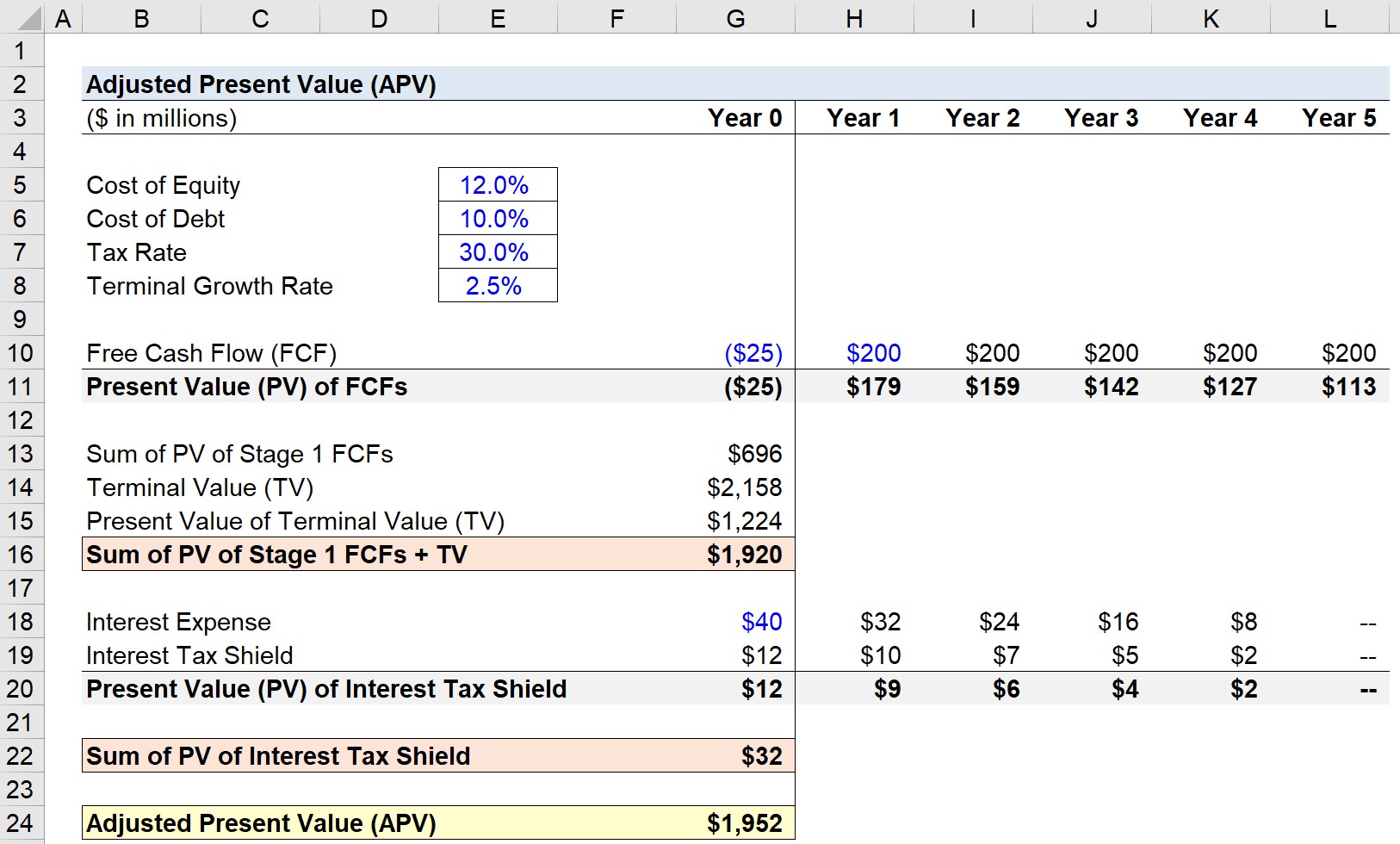