Learn How to Calculate the Asset Coverage Ratio

What is the Asset Coverage Ratio?

The Asset Coverage Ratio measures the number of times a company could hypothetically repay its debt obligations post-liquidation of its tangible assets.

How to Calculate the Asset Coverage Ratio

The asset coverage ratio determines if a company’s liquidated assets can sufficiently cover its debt obligations and liabilities in case its earnings falter unexpectedly.

Ordinarily, earnings and other free cash flow (FCF) metrics are used by lenders to assess the default risk of a potential borrower, as seen in the interest coverage ratio.

In that case, a company must resort to selling off its assets to generate enough cash proceeds to avoid defaulting.

Under a worst-case scenario in which the company’s assets would undergo a forced liquidation, the ability for a company’s assets to adequately cover the creditor claims provides more assurance for lenders.

With that said, the asset coverage ratio reflects a “last resort” measure because a forced liquidation scenario implies the borrower has filed for bankruptcy protection.

The formula used to calculate the asset coverage ratio begins by taking the sum of tangible assets and then subtracting current liabilities, excluding short-term debt.

Next, the numerator is divided by the total debt balance to arrive at the asset coverage ratio.

The asset coverage ratio represents the number of times that a company can repay its debt using the proceeds from the liquidation of its tangible assets.

However, since intangible assets are subtracted – i.e. non-physical assets that cannot be touched – the remaining asset value is the tangible assets.

The rationale behind leaving out intangible assets from the calculation is that intangibles cannot be easily sold (or even be valued objectively).

Upon deducting intangibles from the calculation of assets, we’re left with only tangible assets, which are physical assets such as:

The subsequent step is to subtract current liabilities on the numerator, but note that short-term debt is NOT included.

Current liabilities refer to non-financial, short-term obligations such as accounts payable (A/P), which are payments owed to suppliers/vendors.

As for the denominator, the calculation should be straightforward, as it is simply the short-term debt plus long-term debt.

In our illustrative example, we’ll be using the following model assumptions.

On the other side of the balance sheet, our company has $80m in current liabilities and $120m in total liabilities, with $20m in short-term debt and $40m in long-term debt.

Written out, the formula for calculating the asset coverage ratio is as follows:

Our company’s Year 1 asset coverage comes out to 2.0x.

In other words, if our company’s tangible assets were liquidated and current liabilities were taken care of, the short-term and long-term debt obligations could be paid off twice.

To reiterate from earlier, the higher the asset coverage ratio, the less risk there is for the company (i.e. the borrower has sufficient proceeds post-liquidation to cover its outstanding debt), so our company appears to be financially sound. 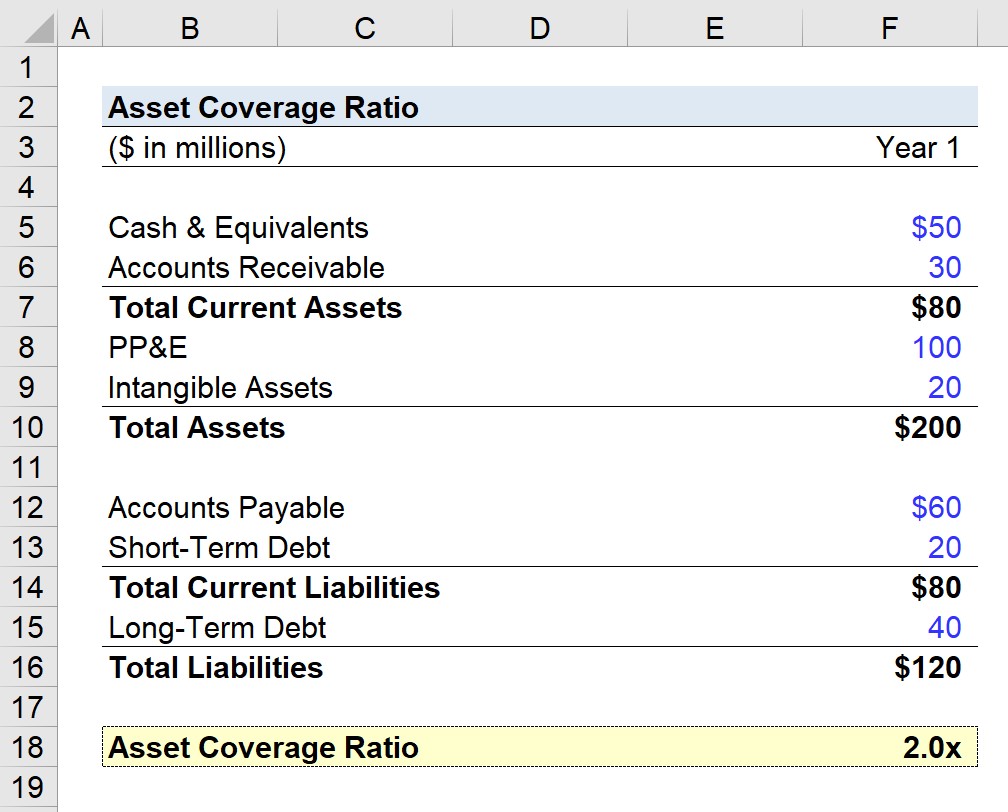