What is the Cash Flow Adequacy Ratio?

The Cash Flow Adequacy Ratio determines if the cash flows generated by a company are sufficient to pay for its recurring expenses.

The cash flow adequacy ratio measures whether a company’s operating cash flows are enough to “cover” its ongoing expenses, which refer to the mandatory repayments on debt, capital expenditures (Capex) and dividend issuances to shareholders.

How to Calculate the Cash Flow Adequacy Ratio

The cash flow adequacy ratio compares a company’s cash flows from operations to its recurring, cash outflows from investing and financing activities.

The first part of the ratio is the operating cash flow (OCF) of the company – i.e. the cash flow from operating activities section from the cash flow statement (CFS) – which represents the cash flows left over after adjustments for the following:

The next part of the ratio compares 1) operating cash flow (OCF) to 2) recurring, ongoing cash outflows.

More specifically, those expenditures consist of the following three items:

Technically, capital expenditures could be split into maintenance vs. growth Capex – yet, the full amount should be taken into consideration.

But in the case of debt, it is recommended to only include the mandatory amortization of debt principal, not the optional (early) repayment of debt.

Why? Most lenders do not necessarily expect a borrower to repay debt principal ahead of schedule.

In fact, if a borrower is underperforming, most lenders would actually prefer the company’s cash flows be allocated to maintaining the company’s operations.

This particular dynamic is a stark contrast to that of dividends paid to shareholders, which are rarely reduced once announced.

If a company decides to cut its dividend payout (or completely halt the program), the market normally assumes the worst and creates skepticism around the long-term profitability of the company, commonly resulting in a lower share price.

The formula for calculating the cash flow adequacy ratio divides the cash flows from operations (CFO) by the sum of routine capital expenditures, mandatory debt repayments and shareholder dividend issuances.

The cash flow adequacy ratio can be categorized as a liquidity ratio, i.e. a metric used to assess if a company’s cash flows (or assets) are sufficient enough to “cover” its spending needs.

As a general rule of thumb, a higher cash flow adequacy ratio is preferable because it implies the company’s operating cash flows are adequate to cover its spending related to capex, debt repayments and dividends.

From a liquidity standpoint, the higher the ratio, the better off the company is for long-term sustainability.

On the other hand, a ratio lower than 1.0x suggests it would be in the company’s best interests to urgently seek outside funding (e.g. new equity or debt issuances), sell non-core assets (e.g. divestitures), and/or reduce total near-term spending, etc.

Like many ratios used in financial analysis, a company’s cash flow adequacy ratio can also be used to evaluate a company’s liquidity position over time to analyze ongoing trends.

If we add D&A and subtract the increase in NWC to net income, we calculate the operating cash flow (OCF) as $40 million.

In the next part of our exercise, we’ll assume the following values for our recurring cash outflows:

With the calculation of our two inputs complete, we can divide our hypothetical company’s operating cash flow by our aforementioned cash outflows to arrive at a cash flow adequacy ratio of 2.0x. 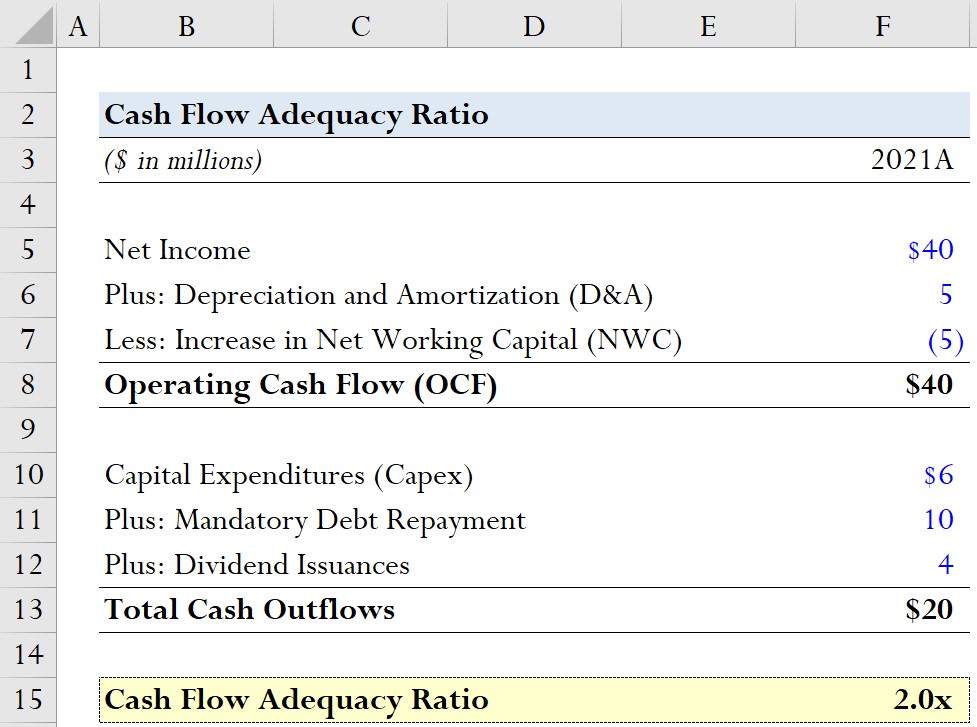