How to Calculate FCCR (Step-by-Step)

The fixed charge coverage ratio (FCCR) is a solvency ratio that assesses if a company’s cash flows are adequate to meet its fixed charges.

Conceptually, the FCCR represents the number of times a company could hypothetically pay off its annual fixed charges.

Oftentimes, lenders utilize the FCCR to determine the creditworthiness of a potential or existing borrower.

Classifying costs as fixed charges requires some discretion, but in general, they have to be:

For example, the amount due and the dates when interest expense and mandatory debt repayment come due are outlined in the loan agreement – in addition, the debt associated with these cash outflows was issued to fund operations (or related functions), and the costs were pre-negotiated (i.e. fixed).

Broadly, FCCR is a ratio that compares an earnings metric to the total fixed charges.

There are two common approaches to calculating the FCCR, which we’ll refer to as the “GAAP” and “Non-GAAP” variations for simplicity.

The first method abides closer to GAAP accounting and divides a company’s earnings before interest and taxes (EBIT) by fixed charges before taxes plus interest expense.

Suppose that a company has the following financials.

However, EBIT is a GAAP measure of profitability – thus, many equity analysts adjust the metric given the drawbacks of accrual accounting, such as the inclusion of non-cash items, most notably depreciation and amortization (D&A).

That being said, the second approach for calculating FCCR starts with a non-GAAP metric, earnings before interest, taxes, depreciation, and amortization (EBITDA).

In the non-GAAP approach, FCCR is calculated as the ratio between.

Capex is subtracted while D&A is added back (i.e. EBITDA) since Capex is a real cash outflow, but D&A is a non-cash expense related to accrual accounting.

EBITDA is already a non-GAAP metric, yet in this context, it can be further changed by discretionary adjustments – as long as there is an agreement in writing allowing as such between the borrower and lender(s).

The latter non-GAAP EBITDA approach is far more common in practice, whereas the GAAP EBIT approach is more often taught in academia.

Besides interest and mandatory principal amortization, the following charges could also be included if deemed appropriate:

In the FCCR calculation, growth CapEx or optional prepayment of debt should be excluded since they constitute discretionary spending.

PIK interest and deferred taxes should also be excluded because they are non-cash (i.e. no real cash outflow occurred).

How to Interpret FCCR (Industry Benchmarks)

Like the interest coverage ratio – i.e. the times interest earned (TIE) ratio – the higher the ratio, the better the company’s creditworthiness.

The higher FCCR, the stronger the company’s creditworthiness as a borrower – all else being equal.

Further, higher FCFs reduce the borrower’s risk of missing a scheduled payment to a third party and allow for more re-investments and discretionary spending to drive growth.

The FCCR covenant forces the borrower to maintain certain metrics above a specified threshold – remember, a lower FCCR puts a greater risk on the lenders.

If the FCCR declines below 1.0x, the company will turn cash flow negative unless additional external financing is obtained – which in such a scenario, would likely be difficult.

However, lenders do not rely on the FCCR by itself, as the FCCR is just one of many credit metrics that help them understand the financial health of a company.

Both FCCR and TIE conceptually have the same objective, i.e. deciding if the company has adequate earnings to meet certain payments.

Since more costs like the annual lease payment are accounted for, the FCCR is a relatively more conservative measure of a company’s ability to meet its upcoming payments.

In effect, the FCCR is inherently a more conservative calculation, which is why senior, risk-averse lenders are typically the ones that pay close attention to the metric.

After subtracting Capex and cash taxes from EBITDA, we’re left with $12.5 million for the covenant-adjusted EBITDA, i.e. the lender-negotiated earnings amount that the covenant is set upon.

In the next step, we will add our two fixed charges – the interest expense and mandatory debt repayment – for a total fixed charges amount of $6.25 million.

In the final step, we can now calculate the fixed charge coverage ratio by dividing the Covenant Adjusted EBITDA by the Total Fixed Charges.

In this case, the 2.0x FCCR suggests the Company’s earnings are sufficiently adequate to pay off its total fixed charges two times. 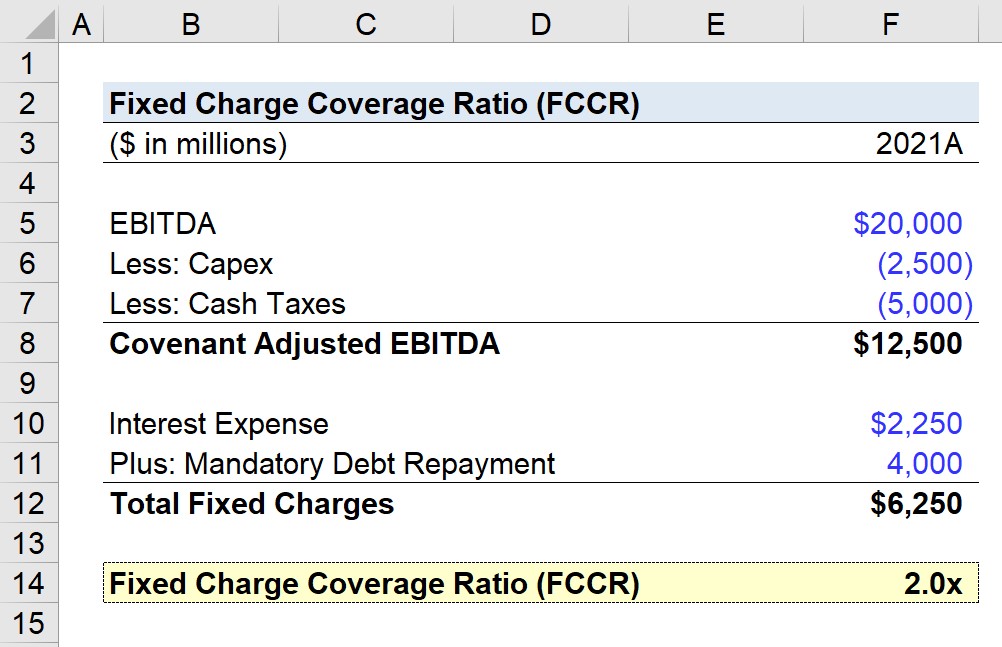