What is Leverage Ratio?

A Leverage Ratio measures a company’s inherent financial risk by quantifying the reliance on debt to fund operations and asset purchases, whether it be via debt or equity capital.

Typically, the debt incurred by the company is compared to metrics related to cash flow, assets, and total capitalization, which collectively help gauge the company’s credit risk (i.e. risk of default).

How to Calculate Leverage Ratio (Step-by-Step)

Companies require capital to operate and to continue providing their products/services to their customers.

For a certain period of time, the cash generated by the company and the equity capital contributed by the founder(s) and/or outside equity investors could be enough.

However, for companies attempting to reach the next stage of growth by pursuing more ambitious plans for expansion, obtaining more market share, expanding their geographical reach, and partaking in M&A, debt financing can often become a necessity.

The standard composition of a company’s capital structure consists of:

Of the various benefits of using debt capital, one notable advantage is related to interest expense being tax-deductible (i.e. the “tax shield”), which lowers the taxable income of a company and the amount in taxes paid.

However, the use of debt financing comes with significant risks, and any company should be aware of the potential consequences of leverage, namely the increased volatility in earnings (i.e. EPS) and the potential for defaulting on debt obligations.

Note that the use of leverage is neither inherently good nor bad – instead, the issue is “excess” debt, in which the negative effects of debt financing become very apparent.

On the balance sheet, leverage ratios are used to measure the amount of reliance a company has on creditors to fund its operation. The financial leverage of a company is the proportion of debt in the capital structure of a company as opposed to equity.

Here, the questions answered are, “What is the current mixture of debt and equity in the company’s capital structure, and is the D/E ratio sustainable?”

For a company dependent on creditors (e.g. to purchase inventory or fund capital expenditures), the unexpected cut-off in access to external financing could be detrimental to the ability of the company to continue operating.

In general, increased amounts of leverage in the capital structure equates to more financial risk, since the company incurs greater interest expense and mandatory debt amortization as well as principal repayments coming up in the future.

But if a company opts to use very minimal leverage, the downside is that there are more shareholders with claims to the same amount of net profits, which results in fewer returns for all equity holders – all else being equal.

Not to mention, the company is unable to benefit from the reduced taxes associated with the tax-deductibility of interest expense, or the lower cost of capital (i.e. debt is a cheaper source of capital than equity, up to a certain point).

To calculate the B/S ratios, we’d use the following formulas: 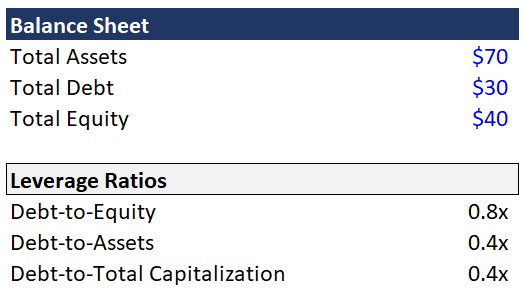 An alternative approach is to measure financial risk using cash flow leverage ratios, which help determine if a company’s debt burden is manageable given its fundamentals (i.e. ability to generate cash).

In practice, these types of ratios measure the proportion of a company’s debt amount to another financing metric (e.g. equity, asset, total capitalization) or to a cash-flow metric to see if the company’s FCF generation could support payments on debt, most notably:

The more predictable the cash flows of the company and consistent its historical profitability has been, the greater its debt capacity and tolerance for a higher debt-to-equity mix.

The cash flow variation is arguably a more practical approach in thinking about the financial risk of a company since you’re comparing two off-setting factors:

The purpose is to assess if the company’s cash flows can adequately handle existing debt obligations.

If yes, the company’s debt-related payments such as interest expense and principal repayment are supported by its cash flows and payments can be met on schedule.

The most common ratio used by lenders and credit analysts is the total debt-to-EBITDA ratio, but there are numerous other variations.

Each of these measures, regardless of the cash flow metric chosen, shows the number of years of operating earnings that would be required to clear out all existing debt.

In effect, these sorts of ratios provide more insights into the ability of the company’s cash flows to cover upcoming debt obligations, as opposed to a proportion of how levered a particular company’s capital structure is.

Note that if you ever hear someone refer to the “leverage ratio” without any further context, it is safe to assume that they are talking about the debt-to-EBITDA ratio.

Here, EBITDA is used as a proxy for operating cash flow and the question being answered is: “Is the company’s cash flow generation capacity enough to satisfy its outstanding financial obligations?”

EBITDA is the most widely used proxy for operating cash flow, despite its shortcomings, such as ignoring the full cash impact of capital expenditures (CapEx).

For highly cyclical, capital-intensive industries in which EBITDA fluctuates significantly due to inconsistent CapEx spending patterns, using (EBITDA – CapEx) can be more appropriate.

The senior debt ratio is important to track because senior lenders are more likely to place covenants – albeit, such restrictions have loosened across the past decade (i.e. “covenant-lite” loans).

For the net debt ratio, many view it as a more accurate measure of financial risk since it accounts for the cash sitting on the B/S of the borrower – which reduces the risk to the lender(s).

Each of the acceptable ranges for the listed ratios is contingent on the industry and characteristics of the specific business, as well as the prevailing sentiment in the credit markets.

The default risk is a sub-set of credit risk that refers to the risk that the borrower might default on (i.e. fail to repay) its debt obligations.

Excessive reliance on debt financing could lead to a potential default and eventual bankruptcy in the worst-case scenario.

Often, a company will raise debt capital when it is well-off financially and operations appear stable, but downturns in the economy and unexpected events can quickly turn the company’s trajectory around.

Sometimes the best course of action could be to potentially hire a restructuring advisory firm in anticipation of a missed interest payment (i.e. default on debt) and/or breached debt covenant.

From a restructuring standpoint, the earlier the company can get in front of the problem without involving the Bankruptcy Court, the better off the company is likely going to be.

For example, the higher the times interest earned ratio (TIE), the better off the company is, because a higher ratio means the company can pay off its interest expense multiple times using the cash flows it generates.

In contrast, higher leverage relative to comparable peers could be concerning, especially if the ratio has been trending upward in recent periods, as the two potential drivers are:

From the perspective of lenders, a higher ratio of debt relative to its cash flow, assets, or equity indicates the company chose to take on a large amount of debt, thereby increasing the likelihood that it could fail to service a debt payment on time due to lack of liquidity or cash flows.

In loan agreements and other lending documents, leverage ratios are one method for lenders to control risk and ensure the borrower does not take any high-risk action that places its capital at risk.

For instance, lenders could set maximum limits for total leverage metric within their credit agreements.

If the borrower breaches the agreement and the ratio exceeds the agreed-upon ceiling, the contract could treat that as a technical default, resulting in a monetary fine and/or the immediate repayment of the full original principal.

In particular, senior lenders, such as corporate banks, tend to be more strict when negotiating lending terms with regard to the requirements that the borrower must abide by.

There are two main types of debt covenants:

In the first section of our modeling exercise, we’ll start by providing the model assumptions.

For either case, the starting point will be 2021, from which we’ll be adding the balance to the step function for the applicable line items.

Next, we’ll state the assumptions regarding the year-over-year (YoY) changes for both the “Downside” and the “Upside” cases.

As for the capitalization section, we only require two metrics:

And from those two metrics, we can calculate the net debt balance by subtracting the cash balance from the total debt outstanding.

In the “Upside” case, the company is generating more revenue at higher margins, which results in greater cash retention on the balance sheet.

The increase in free cash flow (FCF) also means more discretionary debt can be paid down (i.e. optional prepayment), which is why the debt repayment is greater relative to the other case.

Conversely, in the “Downside Case, the company’s revenue is growing at a negative rate with lower margins, which causes the cash balance of the company to decline.

The debt repayment is lower in the second scenario, as only the mandatory amortization payments are made, as the company does not have the cash flow available for the optional paydown of debt.

Now, we have all the required inputs for our model to calculate three important ratios using the following formulas.

Under the “Upside” case, our total debt-to-EBITDA declines in half from 4.0x to 2.0x from 2021 to 2025, which is attributable to the increased free cash flow (FCF) generation, higher profit margins, and greater cash balance.

The senior leverage variation is also reduced by half from 3.0x to 1.5x – which is caused by the increased discretionary paydown of the debt principal (i.e. –$10m each year).

In the same time horizon, the net debt variation falls from 3.0x to 1.0x, with the most significant contributor being the total accumulation of cash. 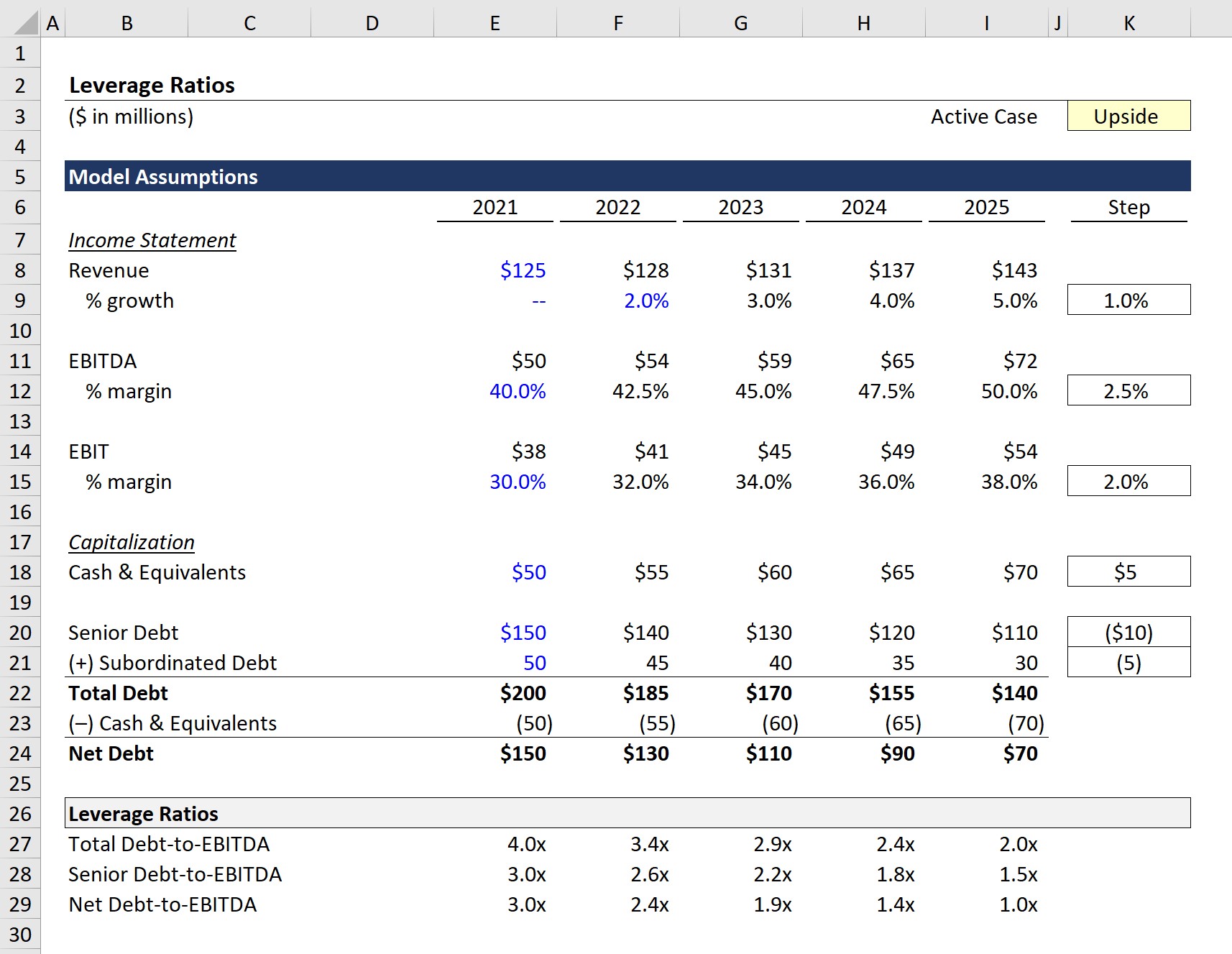 In the final section of our model exercise, we’ll perform the same calculations but under the “Downside” scenario.

As expected, each of the ratios increases as a result of the sub-par performance of the company.

In this case, the company’s senior lenders would likely become concerned regarding the borrower’s default risk, since the senior ratio exceeds 3.0x – which is on the higher end of their typical lending parameters. 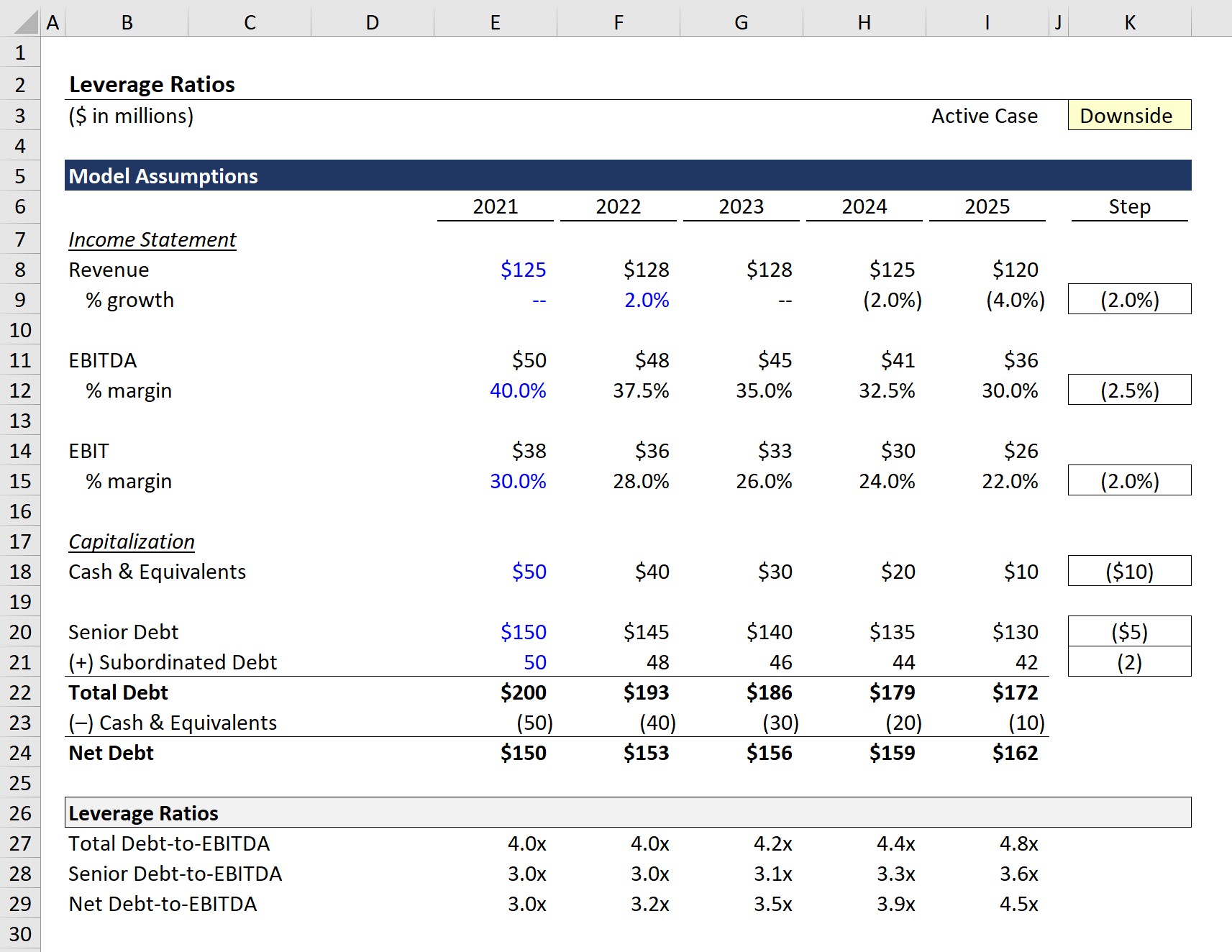