What is Net Income?

Net Income measures the after-tax earnings of a company that remain once all expenses are deducted, most often reported on either a quarterly or annual basis.

The net income profit metric, or “net earnings”, can be found at the bottom of the income statement and is calculated as revenue subtracted by all operating expenses such as cost of goods sold (COGS) and selling, general and administrative (SG&A), as well as non-operating costs like interest expense and taxes.

The net income metric, i.e. the “bottom line” on the income statement, represents a company’s residual earnings, inclusive of all operating and non-operating expenses incurred in a given period.

In accounting, the net profit metric is the amount of revenue left over once all expenses have been accounted for, such as the following costs and expenses:

Since each line item above net profit such as revenue and expenses is recorded under accrual accounting standards, net income is also considered a measure of the “accounting profits” of a company.

The formal definition of “Net Income” per the Securities and Exchange Commission (SEC) is shown below. 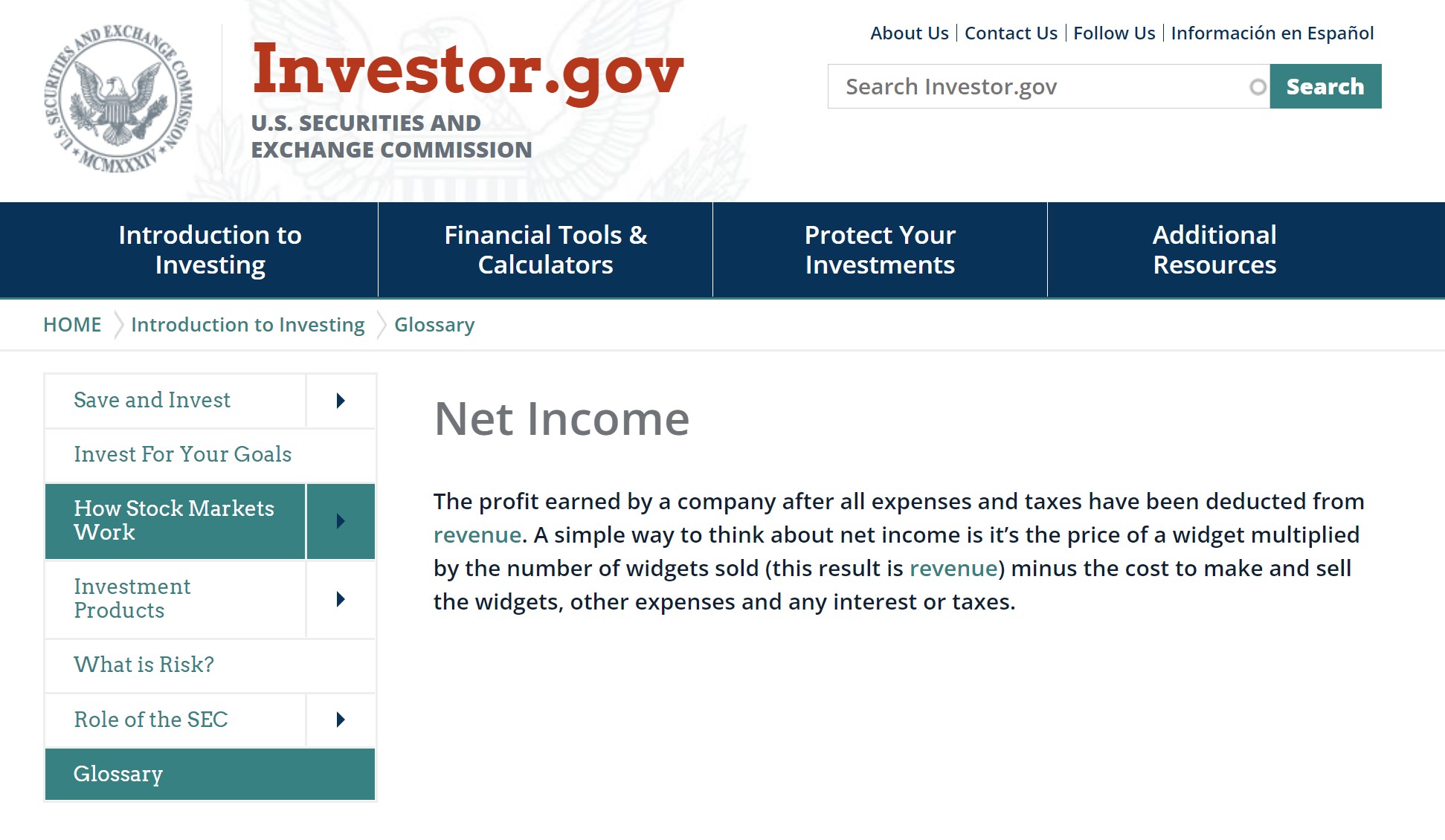 How to Calculate Net Income (Step-by-Step)

The step-by-step process of calculating net income, written out by formula, is as follows:

Starting from revenue, i.e. the “top line” of the income statement, we first deduct COGS to calculate the gross profit metric.

From the gross profit line item, we subtract operating expenses (OpEx), resulting in the company’s operating income, or earnings before interest and taxes (EBIT).

EBIT represents the point on the income statement where all operating costs (i.e. COGS and OpEx) have been deducted, so all the costs onward are non-operating.

The most common examples of non-operating costs are interest expense, net and any one-time expenses such as restructuring charges and write-offs (or write-downs).

After those non-operating costs have been subtracted from EBIT, we’re left with the company’s pre-tax income, or earnings before taxes (EBT), i.e. the taxable income of the company.

The taxes owed to the government are based on the corporate tax rate and jurisdiction of the company among various other factors (e.g. net operating losses, or NOLs).

The calculation of a company’s net profit is equal to its pre-tax income, or earnings before taxes (EBT), minus its tax expenses.

For forecasting purposes when building a financial model, the net profit line item should NOT be explicitly projected, but rather, the line item is a function of the operating assumptions, most notably:

How to Interpret Net Income (“After Tax Earnings”)

By itself, net income as a standalone metric is not too meaningful. In order for a company’s after-tax earnings to become more practical and facilitate comparisons over different historical periods, as well as to its industry peers, the profit metric must be standardized.

A company’s net profits in a given period can be divided by the amount of revenue generated to calculate the net profit margin, a frequently used profitability metric among equity shareholders.

How to Find Net Income on the Income Statement

As we can see from the screenshot of Apple’s 2021 income statement, the beginning line item is revenue, and after deducting all operating and non-operating expenses, the ending line item is net income.

Right below the net profit line item, we can also see a separate section where the earnings per share (EPS) are calculated on a basic and diluted basis. 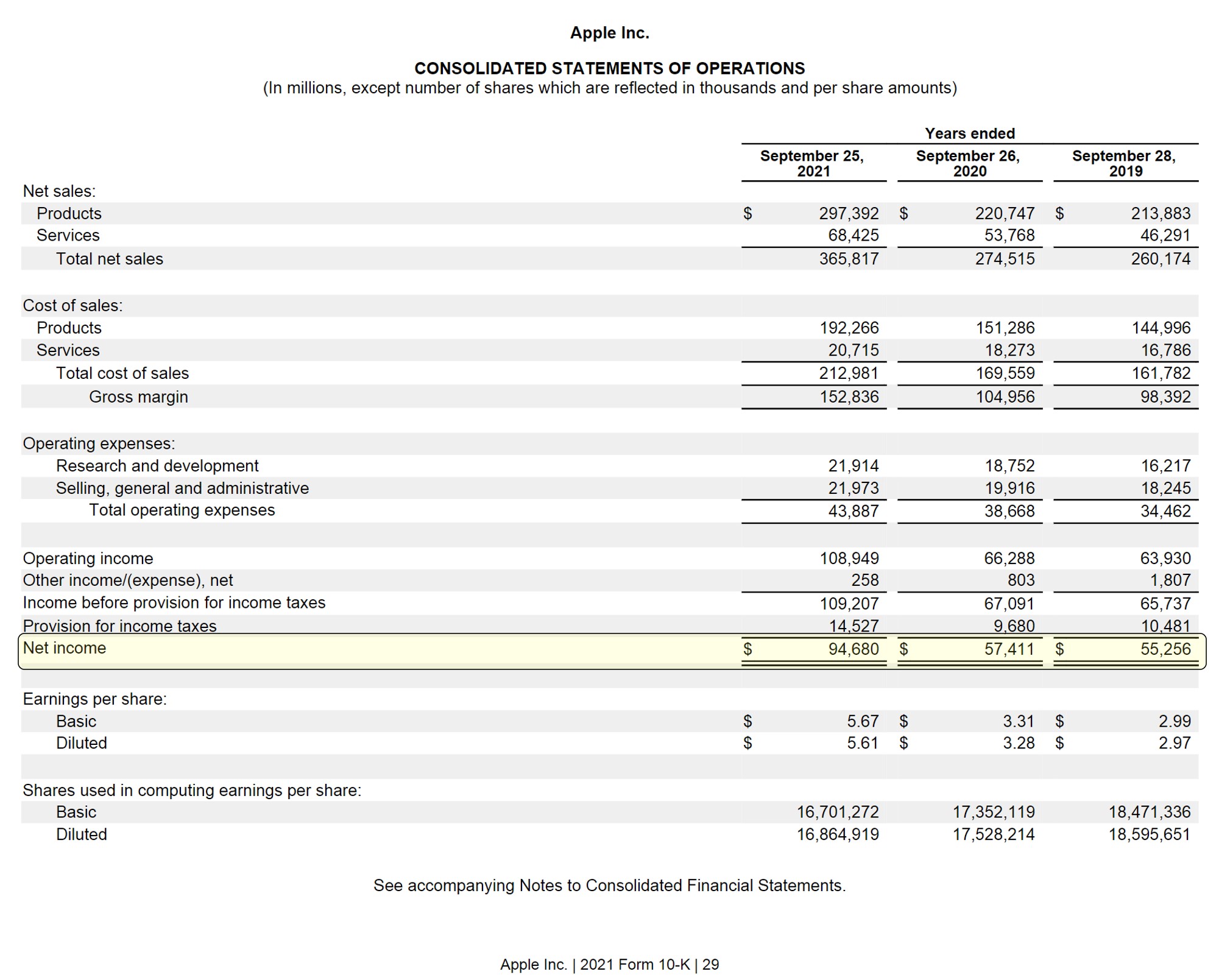 Net Income vs. Cash Flow: What is the Difference?

As a measure of profitability, the net profit metric can misleadingly portray a company’s financial well-being from a liquidity and solvency standpoint.

For instance, a company could consistently produce positive net earnings yet struggle to collect cash payments for sales made on credit – i.e. accounts receivable (A/R).

Despite not actually having retrieved the payment from customers, the sale is recognized as revenue under accrual accounting.

Another issue is that discretionary corporate decisions can greatly affect a company’s net profits. Some of the more impactful discretionary management decisions are as follows:

Net Income vs. EBIT vs. EBITDA

The fact that debt is factored into the net income line item through interest expense causes the metric to be less practical for peer comparisons.

Most of the metric’s limitations stem from the imperfections of accrual accounting that make net income prone to the risk of earnings management (i.e. manipulation of numbers) and a potentially misleading depiction of a company’s operations.

For that specific reason, the cash flow statement reconciles a company’s net earnings, i.e. the starting line item, adjusting for the actual cash inflows/(outflows) to assess the true cash impact from operations, investing, and financing activities.

The linkage between net income on the income statement and the balance sheet is via retained earnings.

The “Retained Earnings” line item appears in the shareholders’ equity section of the balance sheet and represents the accumulated earnings kept by a company to date, net of any common and preferred dividends issued to shareholders.

The formula used to calculate retained earnings is as follows.

Using the figures from our earlier section, we’ll list the inputs below with the proper formatting, where the hard-coded numbers are entered in blue font and calculations are left in black font.

As a general financial modeling “best practice”, we recommend confirming each calculation is correct by cross-checking between 1) the bolded figures in the table (i.e. the black font in the financial model) and 2) the actual income statement filed by Apple.

The net income reported on Apple’s income statement was $94,680 million, confirming the figure we arrived at was calculated correctly.

Since the net income value by itself does not offer much insight about Apple’s profitability, we’ll calculate the net profit margin by dividing net income by revenue.

Once standardized into percentage form, Apple’s net profit margin can now be compared to its historical periods and to its comparable peers to better understand its profitability in 2021. 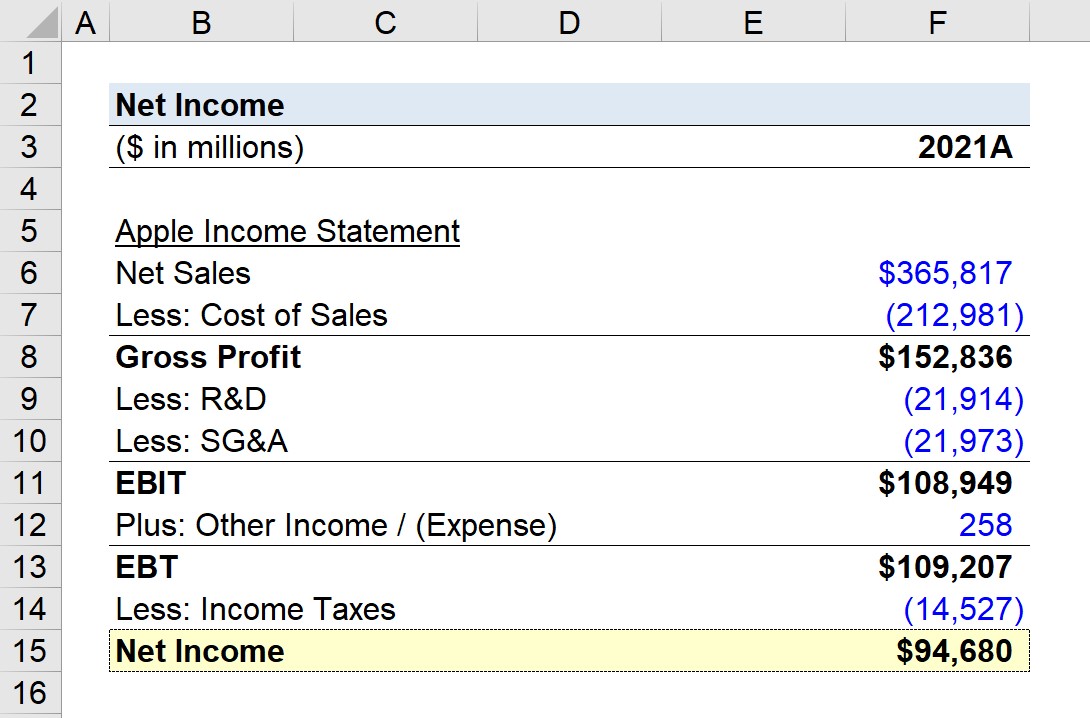