What is a Credit Rating?

Credit Ratings are scoring reports published by independent credit agencies (e.g. S&P Global, Moody’s, Fitch) on the risks of a company defaulting on its financial obligations. 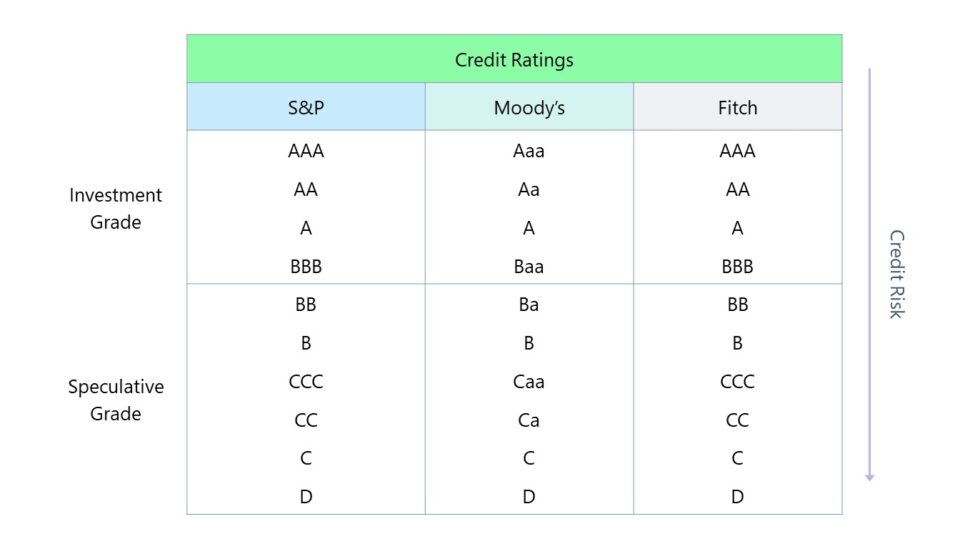 The credit rating of a company refers to the assessment of its creditworthiness as a borrower by a credit agency.

Credit ratings provide guidance to the public regarding the perceived default risk of a borrower and frame the interest rate for lenders to charge.

The credit scoring system and ratings ascribed are intended to be unbiased opinions on a particular company’s relative creditworthiness.

For investors, these ratings provide transparency and an objective report from which to form a view (and improve their investment decision-making).

More specifically, the scoring quantifies risk and applies a scoring system to determine the likelihood that a borrower might:

Credit assessments, which are intended to minimize the chance of a potential conflict of interest, are conducted by independent credit rating agencies that specialize in evaluating default risk.

In the U.S., the three leading agencies – often called the “Big Three” – are listed below:

For companies seeking to raise debt financing, a report backing their credit health from a reputable credit agency can aid in their capital-raising efforts – i.e. to be able to raise enough capital, debt with lower interest rates, etc.

However, all credit ratings from any agency warrant a closer look to identify the rationale behind the scoring, as all ratings – akin to research reports published by equity research analysts – are prone to bias and mistakes.

For example, the “Big Three” credit agencies received scrutiny during the subprime mortgage crisis in 2007/2008 for their inaccurate designations of mortgage-backed securities (MBS) and collateralized debt obligations (CDO).

Since then, the SEC has implemented additional and stricter rules to reduce the chance of conflicts of interests and more disclosure requirements for how the ratings were determined, particularly for structured products.

How to Interpret Credit Rating Score (Investment vs. Speculative Grade)

The scoring system utilized by credit agencies measures the relative likelihood of whether an issuer may repay its financial obligations on time and in full. This system is denoted in letter grades.

Broadly, debt issuances can be categorized as either:

Companies rated as investment-grade are less prone to defaulting on their debt obligations (and restructuring/bankruptcy), with the opposite being true for a company with a speculative-grade rating.

What is a Good Credit Rating?

Generally speaking, credit ratings are a function of the following factors:

Using the above financial data, the agencies independently build out models to estimate the company’s credit risk, namely considerations such as:

While credit risk is certainly a complex topic, high credit ratings are perceived as positive signs for the most part, whereas low credit ratings signify that the underlying company (i.e. the borrower) might be at risk of default.