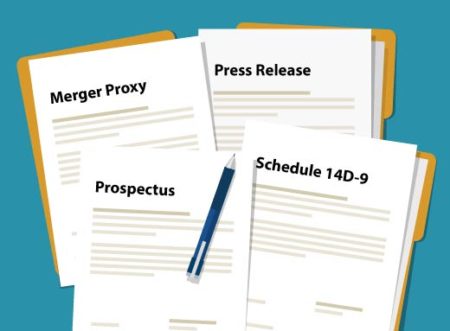 When analyzing M&A transactions, finding the relevant documents is often the hardest part of the job. In an acquisition of a public target, the type of publicly available documents depends on whether the deal is structured as a merger or a tender offer.

When two companies merge, they will jointly issue a press release announcing the merger. The press release, which will be filed with the SEC as an 8K (likely on the same day), will usually include detail about the purchase price, form of consideration (cash vs stock), the expected accretion/dilution to the acquirer and expected synergies, if any. For example, when LinkedIn was acquired by Microsoft in June 13, 2016, they first broke the news to the public via this press release.

A proxy is an SEC filing (called the 14A) that is required when a public company does something that its shareholders have to vote on, such as getting acquired. For a vote on a proposed merger, the proxy is called a merger proxy (or a merger prospectus if the proceeds include acquirer stock) and is filed as a DEFM14A.

A public seller will file the merger proxy with the SEC usually several weeks after a deal announcement. You’ll first see something called a PREM14A, followed by a DEFM14A several days later. The first is the preliminary proxy, the second is the definitive proxy (or final proxy). The specific number of shares that are eligible to vote and the actual date of the proxy vote are left blank as placeholders in the preliminary proxy. Otherwise, the two generally contain the same material.

Various elements of the merger agreement (deal terms and consideration, treatment of dilutive securities, breakup fees, MAC clause) are summarized and are more clearly laid out in the merger proxy than in the legal jargon-heavy merger agreement. The proxy also includes critical detail on the background of the merger, the fairness opinion, the seller’s financial projections, and the compensation and post-deal treatment of seller’s management.

Targets in certain mergers will file the PREM14C and the DEFM14C instead of the DEFM14A/PREM14A. This happens when one or more shareholders hold a majority of the shares and are able to provide approval without a full shareholder vote through written consent. The documents will contain similar information to the regular merger proxy.

The buyer’s tender offer: Schedule TO

To initiate a tender offer, the buyer will send an “Offer to Purchase” to each shareholder. The target must file a Schedule TO with the SEC, with the tender offer or exchange offer attached as an exhibit. The Schedule TO will contain key deal terms.

In May 2012, GlaxoSmithKline sought to acquire Human Genome Sciences for $13.00 in cash per share in a hostile takeover bid via this tender offer.

The target board’s response to a tender offer: Schedule 14D-9

the Schedule 14D-9’s response to unsolicited hostile tender offers is where you’ll see the rare fairness opinion that claims a transaction isn’t fair.

When new shares are issued as part of a merger or exchange offer, a registration statement (S-4) will be filed by the acquirer, requesting that the acquirer’s own shareholders approve the issuance of shares. Sometimes, a registration statement will also include the target merger proxy and will be filed as a joint proxy statement/prospectus. The S-4 usually contains the same detailed information as the merger proxy. Like the merger proxy, it is usually filed several weeks after the transaction is announced.

As an example, 3 months after Procter & Gamble announced it was acquiring Gillette, it filed an S-4 with the SEC. It included both the preliminary joint proxy statement and prospectus. The definitive merger proxy was filed by Gillette 2 months later. In this case, since the proxy was filed later, it contained more updated detail, including projections. Otherwise, the material was largely identical.

Generally, you want to go with the most recently filed document, as it contains the most updated information.