How using acquirer stock as currency impacts the deal 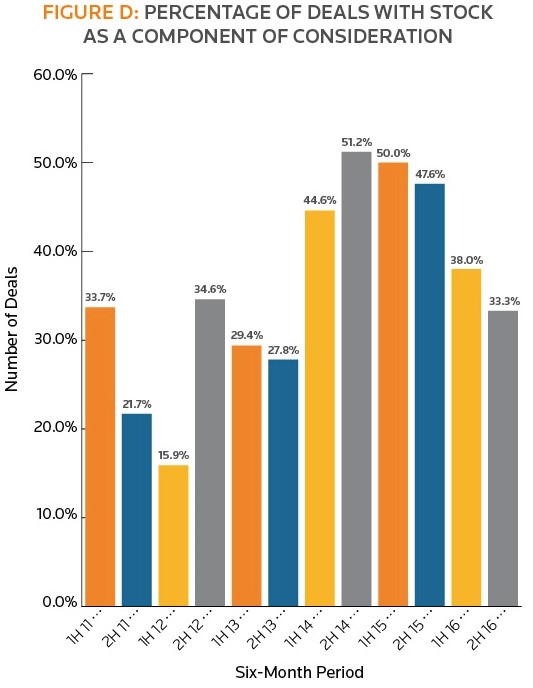 Cash vs. Stock Consideration in M&A

For example, when Microsoft and Salesforce were offering competing bids to acquire LinkedIn in 2016, both contemplated funding a portion of the deal with stock (“paper”).  LinkedIn ultimately negotiated an all-cash deal with Microsoft in June 2016.

Why Pay with Acquirer Stock?

Below we outline the potential motivations for paying with acquirer stock:

In cash deals, the seller has cashed out. Barring some sort of “earn out,” what happens to the combined company – whether it achieves the synergies it hoped, whether it grows as expected, etc. — is no longer too relevant or important to the seller. In deals funded at least partially with stock, target shareholders do share in the risk and reward of the post-acquisition company. In addition, changes in acquirer stock-price fluctuations between deal announcement and close may materially impact the seller’s total consideration (more on this below).

In stock deals, sellers transition from full owners who exercise complete control over their business to minority owners of the combined entity. Decisions affecting the value of the business are now often in the hands of the acquirer.

Acquirers who pay with cash must either use their own cash balances or borrow money. Cash-rich companies like Microsoft, Google and Apple don’t have to borrow to affect large deals, but most companies do require external financing. In this case, acquirers must consider the impact on their cost of capital, capital structure, credit ratios and credit ratings.

While tax issues can get tricky, the big-picture difference between cash and stock deals is that when a seller receives cash, this is immediately taxable (i.e. the seller must pay at least one level of tax on the gain). Meanwhile, if a portion of the deal is with acquirer stock, the seller can often defer paying tax. This is probably the largest tax issue to consider and as we’ll see shortly, these implications play prominently in the deal negotiations. Of course, the decision to pay with cash vs. stock also carries other sometimes significant legal, tax, and accounting implications.

Let’s take a look at a 2017 deal that will be partially funded with acquirer stock: CVS’s acquisition of Aetna. Per the CVS merger announcement press release:

In the CVS/AETNA deal consideration described above, notice that each AETNA shareholder receives 0.8378 CVS shares in addition to cash in exchange for one AETNA share. The 0.8378 is called the exchange ratio.

A key facet of stock deal negotiation is whether the exchange ratio will be fixed or floating. Press releases usually address this as well, and CVS’s press release is no exception:

While more digging into the merger agreement is needed to confirm this, the press release language above essentially indicates that the deal was structured as a fixed exchange ratio. This means that no matter what happens to the CVS share price between the announcement date and the closing date, the exchange ratio will stay at 0.8378. If you’re an AETNA shareholder, the first thing you should be wondering when you hear this is “What happens if CVS share prices tank between now and closing?”

That’s because the implication of the fixed exchange ratio structure is that the total deal value isn’t actually defined until closing, and is dependent on CVS share price at closing. Note how the deal value of $69 billion quoted above is described as “approximately” and is based on the CVS share price during the week leading up to the deal closing (which will be several months from the merger announcement). This structure isn’t always the case — sometimes the exchange ratio floats to ensure a fixed transaction value.

It should be noted that the cash vs. stock decision is only relevant to “strategic buyers.”

Use the form below to download our M&A E-book:

Can you clearly explain the idea of why if a portion of the deal is with acquirer stock, the seller can often defer paying tax? Thanks a lot!

if a company buys a private company(with only one shareholder) in cash, do this owner get to pay tax for the “gain capital”?
thanks!

Why did CVS offer cash and stock for Aetna shares? Usually it is one or the other.