What is Fairness Opinion? 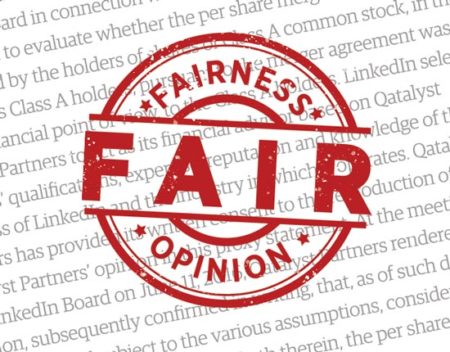 A fairness opinion is important because shareholder interests are not always perfectly aligned with the interests of management. Management, for example, may favor one bidder over another (something Salesforce claimed happened when LinkedIn rejected its offer), might be less motivated to conduct a broad auction, or could negotiate terms post-acquisition that favor themselves over shareholders.

The fairness opinion is designed to protect shareholders from the above situations while also protecting seller management teams and boards from shareholder lawsuits upon consummation of the deal.

When Microsoft acquired Linkedin in June 2016, LinkedIn’s investment banker, Qatalyst Partners, submitted a fairness opinion to the LinkedIn board as a final step before the board approved the deal.

The representatives of Qatalyst Partners then rendered Qatalyst Partners’ oral opinion to the LinkedIn Board, subsequently confirmed by delivery of a written opinion dated June 11, 2016, that, as of June 11, 2016, and based upon and subject to the various assumptions, considerations, limitations and other matters set forth therein, the per share merger consideration to be received … was fair from a financial point of view.

The fairness opinion is included in Linkedin’s merger proxy. It basically states Qatalyst’s belief that the deal is fair.

In addition to housing the fairness opinion letter, the LinkedIn merger proxy (like virtually all merger proxies) includes a summary of Qatalyst’s valuation methodologies and assumptions as well as the projections (provided by LinkedIn management) Qatalyst used to make the valuation.

Qatalyst’s DCF, trading and transaction comps analyses yielded values for LinkedIn ranging from $110.46 to $257.96. The actual purchase price was $196.00. We summarize their valuation conclusions below (quoted text comes from the official LinkedIn merger proxy):

1 Cynics will argue that Qatalyst’s dilution factor and modified EBITDA “innovations” are an effort to show a lower valuation, thereby making the purchase price offered by Microsoft seem more than fair to LinkedIn’s shareholders. We agree that Qatalyst, like all fairness opinion providers, is incentivized to have the fairness opinion show that the deal is fair (see our discussion on this below). However, notwithstanding the out-of-whack incentives inherent in fairness opinions, both the dilution factor and modified EBITDA methodology are defensible if used consistently. Neither we nor the cynics, however, have access to Qatalyst’s full analysis, which would be required to sort out whether the methodology is actually being used consistently.

In reality, the fairness opinion is a “rubber stamp”

Despite all the complicated analyses described above, in reality, the fairness opinion is a rubber stamp. Investment bankers are highly incentivized to declare the fairness of a painstakingly negotiated deal. One reason for this is that a large component of an advisor’s success fee is contingent on getting the deal done. Another is the fact that an investment banker’s mandate comes from management, and an I banker that opposes management’s recommendation by declaring a friendly deal unfair will very quickly have trouble finding business. Below, you’ll find the fee structure for Qatalyst’s advisory work for Linkedin, as disclosed in the LinkedIn merger proxy:

Under the terms of its engagement letter, Qatalyst Partners provided LinkedIn with financial advisory services in connection with a contemplated sale of LinkedIn, which includes the merger, and for which it will be paid approximately $55 million, $250,000 of which was payable upon the execution of its engagement letter, $7.5 million of which became payable upon delivery of its opinion (regardless of the conclusion reached in the opinion), and the remaining portion of which will be paid upon, and subject to, consummation of the merger.

It’s no surprise that a fairness opinion in opposition to management’s recommendation is essentially unheard of (unless the deal is hostile).

In an attempt to add some integrity to the fairness opinion, some sellers have sought opinions from independent investment banks not providing advisory or financing services to the engagement. While this approach serves to eliminate conflicts of interest, it often doesn’t achieve this objective. That’s because the seller is still choosing the fairness opinion provider, and rendering an opinion unfavorable can jeopardize that provider’s business in the long term. Thus, it’s no surprise that a fairness opinion in opposition to management’s recommendation is essentially unheard of (unless the deal is hostile).

Most stakeholders in the M&A process are quite aware of this dynamic. Valuation is so dependent on assumptions that a negotiated sale by two willing parties is always justifiable if that’s the desired goal. Nonetheless, the obvious conflict of interest has drawn criticism. The fairness opinion, as well as the valuation work that investment banks generally provide to their clients through pitchbooks and CIMs, is widely recognized to differ in motivation, purpose and incentive as compared to that on the buy side.