What is a Reverse Merger?

A Reverse Merger occurs when a privately-held company acquires a majority stake in a publicly-traded company. A reverse merger – or “reverse takeover” – is most often undertaken to bypass the traditional initial public offering (IPO) process, which can be time-consuming and costly.

In a reverse merger transaction, a private company obtains a majority stake (>50%) in a public company to gain access to the capital markets while circumventing the traditional IPO process.

Usually, the public company in a reverse merger is a shell company, meaning that the company is an “empty” company only existing on paper and does not actually have any active business operations.

Nevertheless, there are other instances in which the public company does indeed have ongoing day-to-day operations.

As part of the reverse merger, the private company acquires the publicly-listed target company by exchanging the vast majority of its shares with the target, i.e. a stock swap.

In effect, the private company essentially becomes a subsidiary belonging to the publicly-traded company (and is thereby considered a public company).

Upon completion of the merger, the private company obtains control over the public company (which remains public).

While the public shell company remains intact post-merger, the private company’s controlling stake enables it to take over the consolidated company’s operations, structure, and branding, among other factors.

A reverse merger is a corporate tactic utilized by private companies seeking to “go public” – i.e. become publicly listed on an exchange – without formally undergoing the IPO process.

The primary advantage for a company to pursue a reverse merger instead of an IPO is the avoidance of the onerous IPO process, which is lengthy and costly.

As an alternative to the traditional IPO route, a reverse merger can be perceived as a more convenient, cost-efficient method to obtain access to the capital markets, i.e. public equity and debt investors.

In theory, a well-executed reverse merger should create shareholder value for all stakeholders and offer access to the capital markets (and increase liquidity).

The decision to undergo an IPO can be adversely affected by changing market conditions, making it a risky decision.

In contrast, the reverse merger process is not only significantly more cost-effective but can also be completed in a matter of weeks since the public shell company is already registered with the U.S. Securities and Exchange Commission (SEC).

On the other hand, reverse mergers have various risks, namely the lack of transparency.

The drawback to an expedited, quick process is the reduced time to perform due diligence, which creates more risk stemming from overlooking certain details that can turn out to be costly mistakes.

In a limited time frame, the companies involved (and their shareholders) must conduct diligence on the proposed transaction, but there is a significant time constraint for all parties engaged.

Moreover, the takeover of a private company is not always an easy process, since the existing stakeholders could oppose the merger, causing the process to be prolonged from unexpected obstacles.

The final disadvantage relates to the share price movement of the private company following the merger.

Given the limited time to conduct diligence and the reduced amount of information available, the lack of transparency (and unanswered questions) causes share price volatility, especially right after the transaction closes.

In 2013, Dell was taken private in a $24.4 billion management buyout (MBO) alongside Silver Lake, a global technology-oriented private equity firm.

Following the acquisition, the portfolio of brands included Dell, EMC, Pivotal, RSA, SecureWorks, Virtustream, and VMware – with the controlling stake in VMware (>80%) representing a crucial part of the reverse merger plans.

A couple of years thereafter, Dell Technologies began to pursue options to return to becoming a publicly listed company, offering a path for private equity backer Silver Lake to exit its investment.

Dell soon confirmed its intention to merge with VMware Inc, its publicly-held subsidiary.

In late 2018, Dell returned to trade under the ticker symbol “DELL” on the NYSE after the company repurchased shares of VMware in a cash-and-stock deal worth around $24 billion.

For Dell, the reverse merger – a complicated ordeal with several major setbacks – enabled the company to return to the public markets without undergoing an IPO.

In 2021, Dell Technologies (NYSE: DELL) announced its plans to complete a spin-off transaction involving its 81% stake in VMware (VMW) to create two standalone companies, marking the completion of Dell’s initial objective and the decision to now operate independently for the best interests of all stakeholders. 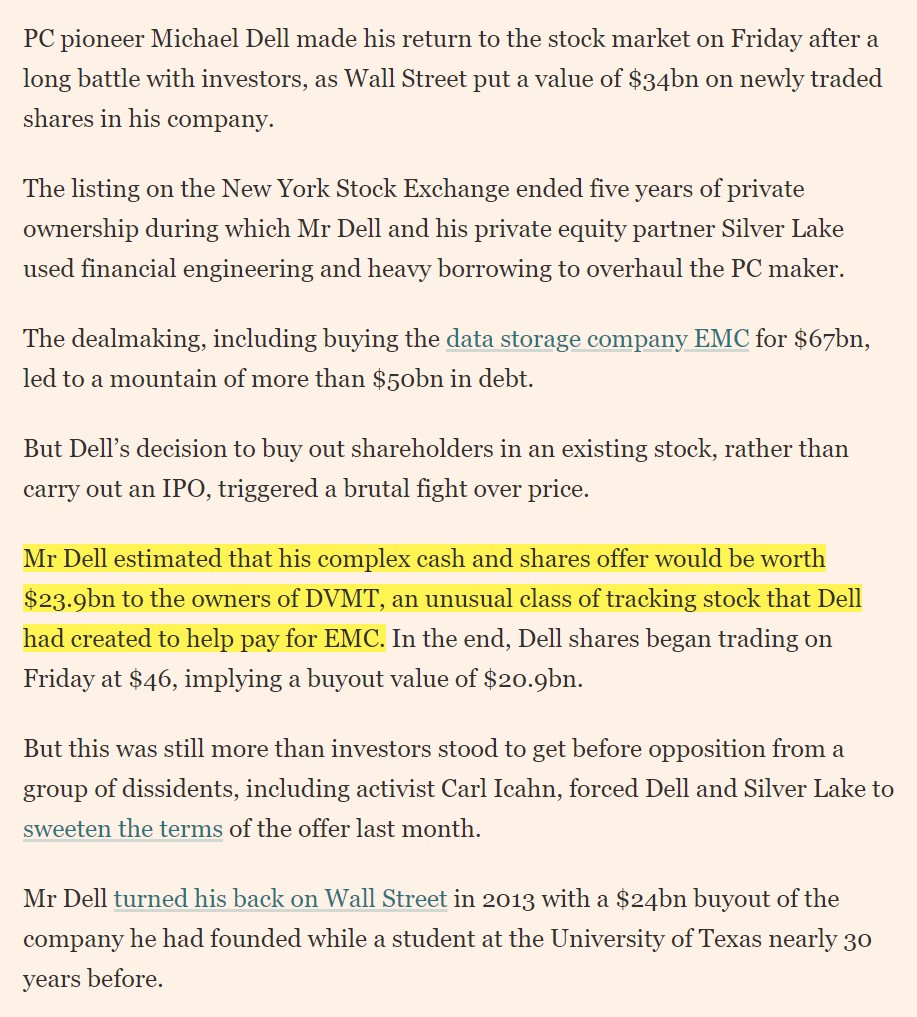