Guide to Understanding the Concept of Merger Arbitrage

What is Merger Arbitrage?

Merger arbitrage is an investment strategy that seeks to profit from the uncertainty that exists during the period between when an acquisition is announced and when it is formally completed.

A simple merger arbitrage example will illustrate this: On June 13, 2016, Microsoft announced its acquisition of LinkedIn, offering $196 for each LinkedIn share.

On the announcement date, LinkedIn shares jumped from the $131.08 pre-announcement price to close at $192.21.

The question here is, “Why did LinkedIn shares stop short of $196?”

The period between when a deal is announced and when it closes (and LinkedIn shareholders actually get their $196) can last several months. During this period, LinkedIn shareholders still have to vote to approve the deal and the companies still need to secure regulatory approvals and file a whole bunch of legal paperwork.

The spread between the $192.21 and the $196.00 reflects the perceived risk that the deal will not go through. As we can see, by December, as the LinkedIn deal inched towards close, traders bid up the value to $195.96: 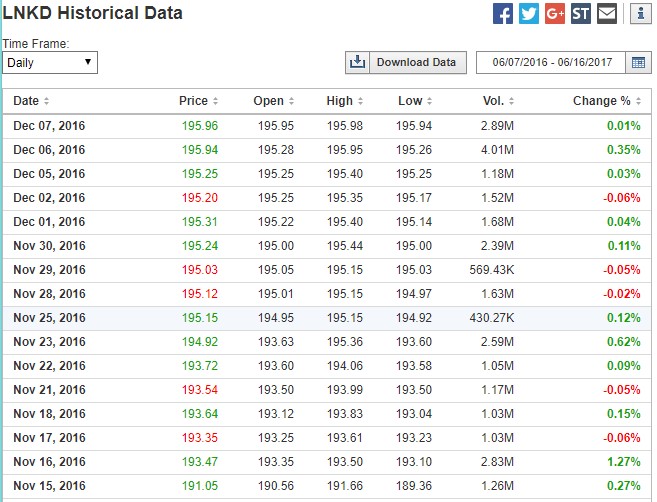 The trading strategy of buying up target shares on the news of an announcement and waiting until the acquirer pays the full amount at the closing date is called “merger arbitrage” (also called “risk arbitrage”) and is a type of “event-driven” investing. There are hedge funds dedicated to this.

Here’s the basic idea. As you can see below , if you bought LinkedIn at announcement and waited, you’d make an annualized return of 4.0%.

The potential return here is low because, as you’ll see shortly, the risk of the deal falling through is low.

For deals where there’s significant antitrust or other regulatory risk (such as AT&T/Time Warner) or risk that shareholders won’t vote to approve the deal, shares don’t come as close to the purchase price.