Guide to Understanding the Inventory Concept

Inventory refers to the raw materials used by a company to produce goods, unfinished work-in-process (WIP) goods, and finished goods available for sale.

What are the 4 Types of Inventory?

In accounting, the term “inventories” describe a wide array of materials used in the production of goods, as well as the finished goods waiting to be sold.

How to Calculate Inventory (Step-by-Step)

Inventories are recorded in the current assets section of the balance sheet, since unlike fixed assets (PP&E) — which have useful lives of greater than twelve months — a company’s inventories are expected to be cycled out (i.e. sold) within one year.

The carrying value of a company’s inventories balance is affected by two main factors:

How to Interpret Change in Inventory on Cash Flow Statement

There is no inventories line item on the income statement, but it gets indirectly captured in the cost of goods sold (or operating expenses) — regardless of whether the corresponding inventories were purchased in the matching period, COGS always reflects a portion of the inventories that were used.

On the cash flow statement, the change in inventories is captured in the cash from operations section, i.e. the difference between the beginning and ending carrying values.

By ordering materials on an as-needed basis and minimizing the time that inventories remain idle on shelves until being sold, the company has less free cash flow (FCFs) tied up in operations (and thus more cash available to execute other initiatives).

LIFO and FIFO are the top two most common accounting methods used to record the value of inventories sold in a given period.

The impact on net income depends on how the price of inventories has changed over time.

The weighted-average cost method is the third most widely used accounting method after LIFO and FIFO.

Under the weighted-average method, the cost of the inventories recognized is based on a weighted average calculation, in which the total production costs are added and then divided by the total number of items produced in the period.

Since each product cost is treated as equivalent and the costs are “spread out” equally in even amounts, the date of purchase or production is ignored.

Hence, the method is often criticized as too simplistic of a compromise between LIFO and FIFO, especially if the product characteristics (e.g. prices) have undergone significant changes over time.

Under U.S. GAAP, FIFO, LIFO, and the Weighted Average Method are all permitted but note that IFRS does not allow LIFO.

The days inventory outstanding (DIO) measures the average number of days it takes for a company to sell off its inventories. Companies aim to optimize their DIO by quickly selling their Inventories on hand.

The inventory turnover ratio measures how often a company has sold and replaced its inventories in a specified period, i.e. the number of times inventories was “turned over”.

When interpreting the KPIs above, the following rules are generally true:

In order to project a company’s inventories, most financial models grow it in line with COGS, especially since DIO tends to decline over time as most companies become more efficient as they mature.

DIO is usually first calculated for historical periods so that historical trends or an average of the past couple of periods can be used to guide future assumptions. Under this method, the projected inventories balance equals the DIO assumption divided by 365, which is then multiplied by the forecasted COGS amount.

Suppose we are building a roll-forward schedule of a company’s inventories.

Starting off, we’ll assume that the beginning of period (BOP) balance of inventories is $20 million, which is impacted by the following factors:

The net change in inventories during Year 0 was zero, as the reductions were offset by the purchases of new raw materials.

For Year 1, the beginning balance is first linked to the ending balance of the prior year, $20 million — which will be affected by the following changes in the period.

Using the same equation as before, we arrive at an ending balance of $22 million in Year 1. 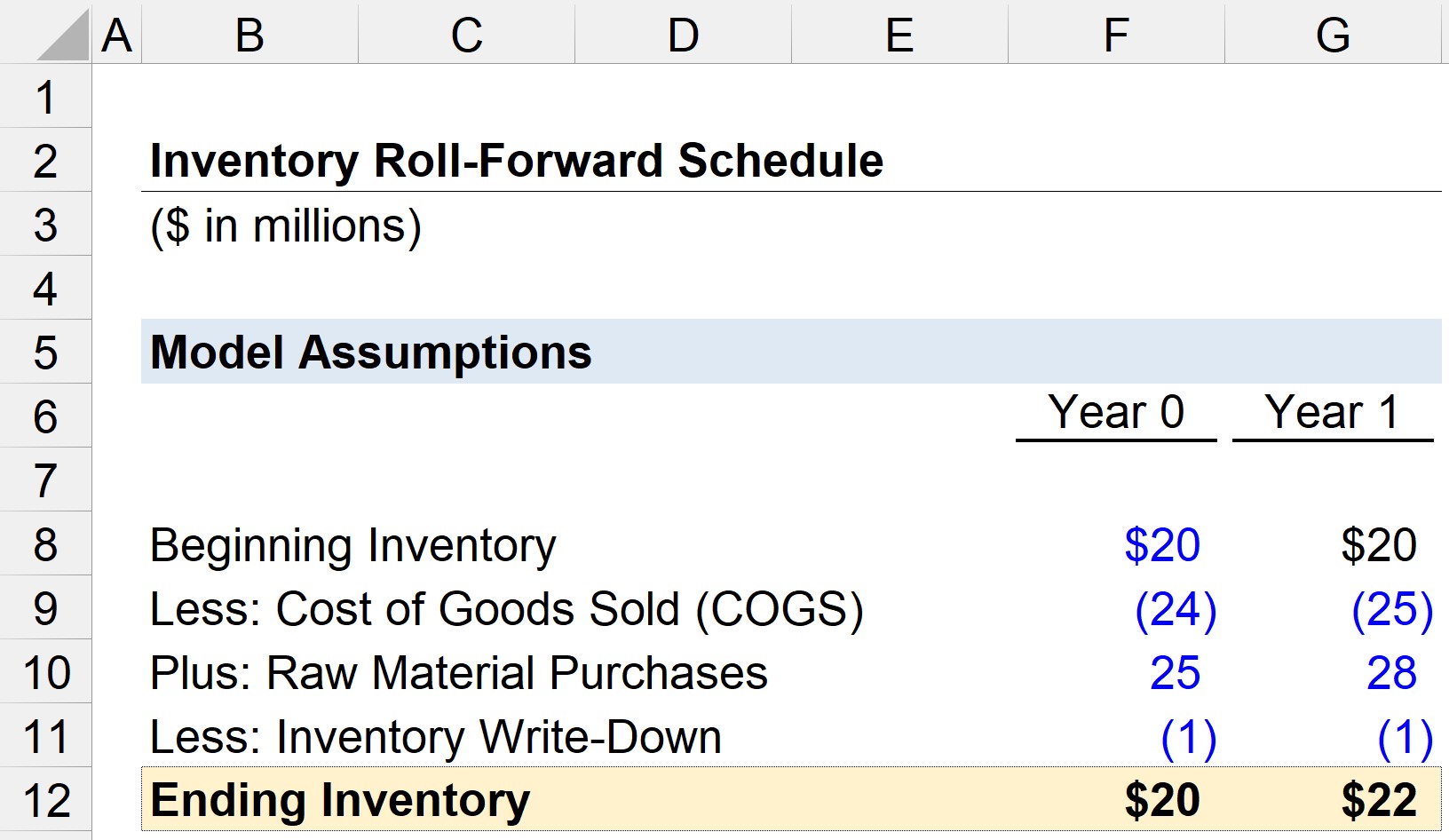