US GAAP vs. IFRS

Comprehensive Guide of US GAAP vs IFRS Accounting

What is the Difference Between US GAAP vs. IFRS?

US GAAP and IFRS are the two predominant accounting standards used by public companies, but there are differences in financial reporting guidelines to be aware of.

In order to present a fair depiction of the business conducted, publicly-traded companies are required to follow specific accounting guidelines when reporting their performance in financial filings.

For publicly-traded companies in the US, these rules are created and overseen by the Financial Accounting Standards Board (FASB) and referred to as US Generally Accepted Accounting Principles  (US GAAP).

US GAAP vs. IFRS Convergence

Although we have seen moderate convergence of US GAAP and IFRS in the past, the likelihood of a single set of international standards being adopted in the near term remains very low.

We have compiled a single cheat sheet to outline the key differences between US GAAP and IFRS.  You can download the complete US GAAP vs IFRS Cheat Sheet below.

Given the statistics above, it is clear why it is important to understand the differences between US GAAP and IFRS. More specifically, there are two developing trends to be aware of: 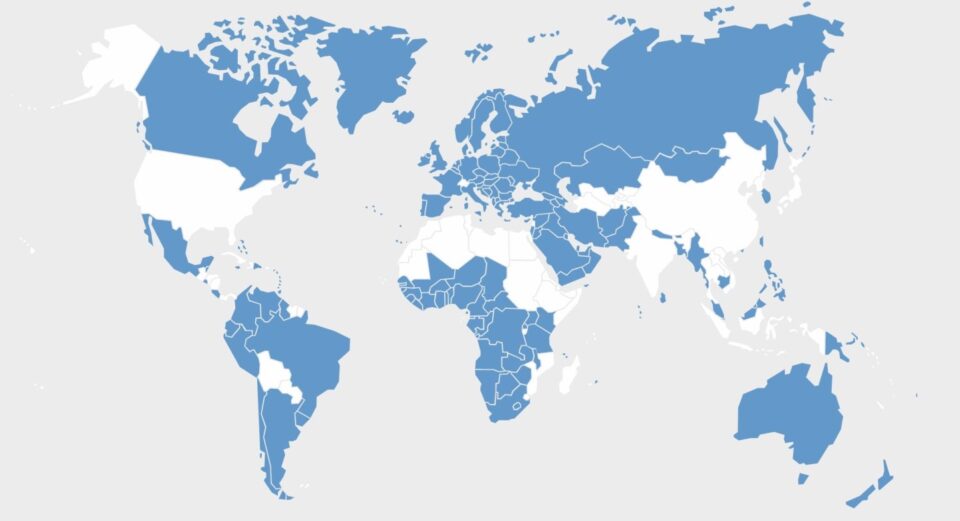 Differences between US GAAP vs IFRS

The following discussion highlights specific differences between the two sets of standards that may be useful to users of financial statements.

There are four main areas where the two diverge in financial reporting:

The Statement of Cash Flows

US GAAP requires that interest expense, interest income and dividend income be accounted for in the operating activities section, and dividends paid be reported in the financing section.

However, IFRS provides greater discretion with respect to which section of the Statement of Cash Flows these items can be reported in.

US GAAP considers each quarterly report as an integral part of the fiscal year, and a Management’s Discussion and Analysis section (MD&A) is required.

In contrast, IFRS considers each interim report as a standalone period, and while an MD&A is allowed, it is not required.

Both US GAAP and IFRS allow different types of non-standardized metrics (e.g. non-GAAP or non-IFRS measures of earnings), but only US GAAP prohibits the use of these directly on the face of the financial statements.

Under GAAP, companies are allowed to supplement their earning report with non-GAAP measures.

The most commonly used example is earnings before interest, taxes, depreciation and amortization (EBITDA), a non-GAAP measure that includes adjustments for non-cash items such as depreciation and non-recurring, one-time expenses to more accurately represent the “true” performance of the business.

However, adjusted EBITDA will be included in a separate reconciliation section rather than directly showing up on the actual income statement.

US GAAP vs IFRS: Recognition of Accounting Elements

Whether a company reports under US GAAP vs IFRS can also affect whether or not an item is recognized as an asset, liability, revenue, or expense, as well as how certain items are classified.

US GAAP requires that all R&D is expensed, with specific exceptions for capitalized software costs and motion picture development. While IFRS also expenses research costs, IFRS allows the capitalization of development costs as long as certain criteria are met.

Referred to as ‘Provisions’ under IFRS, contingent liabilities refer to liabilities for which the likelihood and amount of the settlement are contingent upon a future and unresolved event.

When comparing US GAAP and IFRS, differences in the definition of the word “probable” and the measurement techniques used can lead to differences in both the recognition and amount of Contingent Liabilities. IFRS has a lower threshold for recognition as its definition of probable is > 50%, while US GAAP generally considers a contingent liability probable only when the likelihood is >75%.

US GAAP and IFRS also differ with respect to the amount of the liability that is recognized.

IFRS generally uses the expected value in its measurement of the amount of the liability recognized, while the amount under US GAAP depends on the distribution of potential outcomes.

As such, the same scenario can lead to differences in the recognition, measurement and even disclosure of contingent liabilities if the company was reporting under US GAAP or IFRS.

Under US GAAP, all deferred tax assets (DTAs) are recognized and netted out/offset with a valuation allowance when it is more likely than not (>50%) that the company will not be able to use the DTA.

But for IFRS, DTAs are only recognized as assets when probable (>50%), so there is no need for valuation allowances.

For US GAAP, all property is included in the general category of Property, Plant and Equipment (PP&E). Under IFRS, when the property is held for rental income or capital appreciation the property is separated from PP&E as Investment Property.

Under US GAAP, harvestable plants are included in inventory while production animals are included in PP&E. On the other hand, living animals and plants that can be transformed or harvested are considered biological assets and are measured at their fair value until they can be harvested under IFRS.

US GAAP vs IFRS: Measurement of Accounting Elements

Reporting differences with respect to the process and amount by which we value an item on the financial statements also applies to inventory, fixed assets and intangible assets.

Under US GAAP, both Last-In-First-Out (LIFO) and First-In-First-Out (FIFO) cost methods are allowed. However, LIFO is not permitted under IFRS because LIFO generally does not represent the physical flow of goods.

The table below shows the impact of this difference on other metrics and should be useful when using these metrics across US GAAP and IFRS: 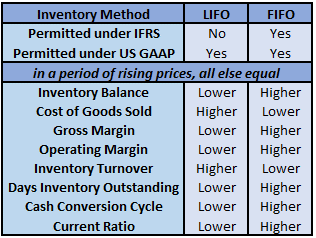 Both accounting standards recognize fixed assets when purchased, but their valuation can differ over time.

US GAAP requires that fixed assets are measured at their initial cost; their value can decrease via depreciation or impairments, but it cannot increase.

In addition, IFRS requires separate depreciation processes for separable components of PP&E. US GAAP allows but does not require such cost segregations.

Similar to fixed assets, under US GAAP, intangible assets must be reported at cost. Under IFRS, companies can elect fair value treatment, meaning asset values can increase or decrease depending on changes in their fair value.

US GAAP vs IFRS: Disclosures and Terminology

To conclude our section on how US GAAP and IFRS differ, another area of variance is the information required to be disclosed within the footnotes of the financial statements, as well as the terminology frequently found in filings.

US GAAP and IFRS can differ in the specifics and level of detail required. Footnotes are essential sources of additional company-specific information on the choices and estimates companies make and when discretion is exerted, and thus useful to all users of financial statements.

A classic example of revenue recognition manipulation that we discussed in our Accounting Crash Course was software-maker Transaction Systems Architects (TSAI).

This was eventually exposed in 2020, in which TSAI’s revenue from software license fees saw an immediate 16.1% fall post-adoption of SOP 97-2.

Below is the disclosure in TSAI’s 2020 10-K that explained its sudden decrease in software revenue.

Later in 2002, KPMG replaced Arthur Andersen as TSAI’s auditor and upon restating its financials – TSAI’s 1999 to 2001 cumulative revenue was reduced by $145mm due to the improper recognition of revenue related to its software licensing arrangements.

US GAAP vs IFRS Terminology

US GAAP and IFRS show differences in terminology as noted in the following examples:

Similarities Between US GAAP and IFRS

Despite the many differences, there are meaningful similarities as evidenced in recent accounting rule changes by both US GAAP and IFRS.

The Revenue Recognition Standard, effective 2018, was a joint project between the FASB and IASB with near-complete convergence. It provided a broad conceptual framework using a five-step process for considering contracts with customers and recognizing revenue.

The updated standard helped ensure that the accounting guidelines would better match the underlying economics of new business models and products.

The traditional business model in the automotive industry has gradually begun to shift from one-time purchases to continuous post-sale revenue.

This movement to get existing customers to pay more to unlock embedded features has been led by automaker Tesla, whose vehicles come with different tiers of connectivity and features based on the paid subscription service plan (e.g. Standard Connectivity, Premium Connectivity, Acceleration Boost).

In effect, this facilitates the standardization and comparability of revenue recognition across different businesses and industries.

The Lease Standards, effective 2019, requires that leases greater than 12 months are reported on Balance Sheets as Right of Use Assets under both US GAAP and IFRS. US GAAP distinguishes between Operating and Finance Leases (both are recognized on the Balance Sheet), while IFRS does not.

The important difference from this change, that companies with leases may see a material increase in non-current assets and the corresponding debt obligations on their balance sheets, is relevant for both US GAAP and IFRS.

Under US GAAP prior to 2015, debt issuance costs were capitalized as an asset on the Balance Sheet.

In 2015, US GAAP effectively matched IFRS’s treatment of netting these costs against the amount of outstanding debt, similar to debt discounts. This leads to the debt being recognized on the Balance Sheet as a liability (the net amount outstanding) not both an asset (the capitalized issuance cost) and a liability (the outstanding principal). For more information, see US GAAP’s Accounting Standard Update in 2015.

For a deeper dive into the distinctions between US GAAP and IFRS, please see our Financial Reporting Differences in a Global Economy Course. 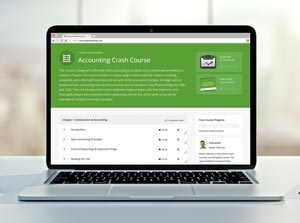 Our popular accounting course is designed for those with no accounting background or those seeking a refresher.