What is Accounts Receivable?

Accounts Receivable (A/R) is defined as payments owed to a company by its customers for products and/or services already delivered to them – i.e. an “IOU” from customers who paid on credit.

How to Calculate Accounts Receivable (Step-by-Step)

Under accrual accounting, the accounts receivable line item, often abbreviated as “A/R”, refers to payments not yet received by customers that paid using credit rather than cash.

On the balance sheet, accounts receivable is categorized as an asset since it represents a future economic benefit to the company.

Whether cash payment was received or not, revenue is recognized and the amount to be paid by the customer can be found on the accounts receivable line item.

If a company’s accounts receivable balance increases, more revenue has been earned with payment in the form of credit, so more cash payments must be collected in the future.

On the other hand, if a company’s A/R balance declines, the payments billed to the customers that paid on credit were received in cash.

To reiterate, the relationship between accounts receivable and free cash flow (FCF) is as follows:

On the cash flow statement, the starting line item is net income, which is then adjusted for non-cash add-backs and changes in working capital in the cash from operations (CFO) section.

Since an increase in A/R signifies that more customers paid on credit during the given period, it is shown as a cash outflow (i.e. “use” of cash) – which causes a company’s ending cash balance and free cash flow (FCF) to decline.

While the revenue has technically been earned under accrual accounting, the customers have delayed paying in cash, so the amount sits as accounts receivables on the balance sheet.

The screenshot below is from the latest 10-K filing by Amazon (AMZN) for fiscal year ending 2021. 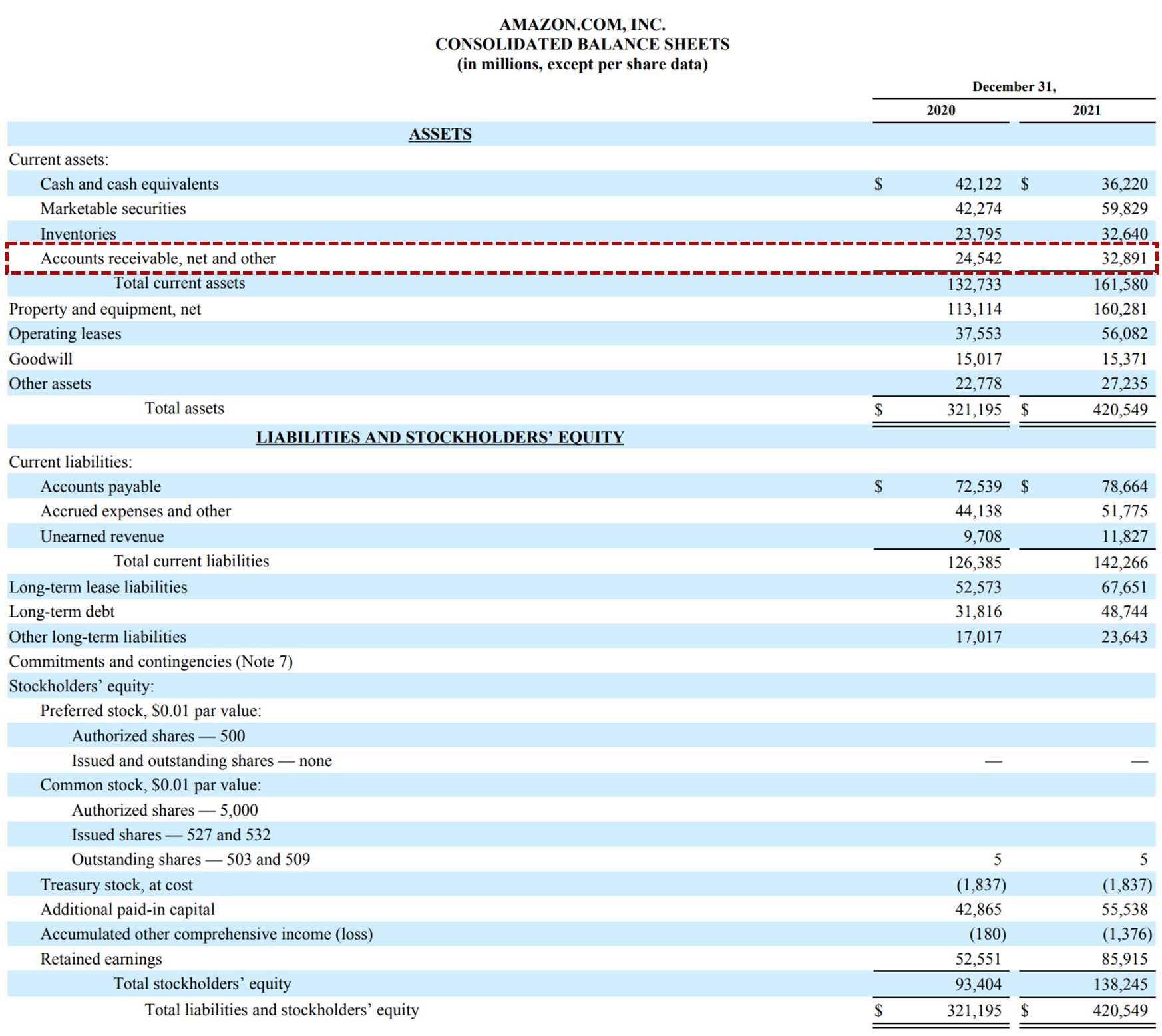 How to Forecast Accounts Receivable (A/R)

For purposes of forecasting accounts receivable, the standard modeling convention is to tie A/R to revenue since the two are closely linked.

The days sales outstanding (DSO) metric is used in the majority of financial models to project A/R.

DSO measures the number of days on average it takes for a company to collect cash from customers that paid on credit.

The formula for days sales outstanding (DSO) is calculated as follows.

To properly forecast A/R, it’s recommended to follow historical patterns and how DSO has trended in the past couple of years, or to just take an average if there appear to be no significant shifts.

Then, the projected accounts receivable balance is equal to:

If the days sales outstanding (DSO) of a company have been increasing over time, that implies the company’s collection efforts require improvement, as more A/R means more cash is tied up in operations.

But if DSO declines, that implies the company’s collection efforts are improving, which has a positive impact on the cash flows of the company.

In our illustrative example, we’ll assume we have a company with $250 million in revenue in Year 0.

Moreover, at the beginning of Year 0, the accounts receivable balance is $40 million but the change in A/R is assumed to be an increase of $10 million, so the ending A/R balance is $50 million in Year 0.

For Year 0, we can calculate the days sales outstanding (DSO) with the following formula:

As for the projection period from Year 1 to Year 5, the following assumptions will be used:

Now, we’ll extend the assumptions until we reach a revenue balance of $350 million by the end of Year 5 and a DSO of 98 days.

Starting from Year 0, the accounts receivable balance expands from $50 million to $94 million in Year 5, as captured in our roll-forward.

Since the DSO is increasing, the net cash impact is negative, and the company would likely need to consider making adjustments and identify the source of the growing collection issues.