What is the Average Cost Method?

The Average Cost Method assigns inventory costs using a weighted average approach, wherein the costs of production are added and divided by the number of items produced.

The average cost method, or the “weighted-average method”, is one of the most commonly-used inventory accounting recording policies, only trailing behind FIFO and LIFO.

The average cost method utilizes a weighted average calculation as a compromise between FIFO and LIFO.

The process of calculating the average cost method for inventory recognition is a two-step process.

With that being said, the weighted average approach implies that each product cost receives equal treatment and that the inventory costs are spread evenly, irrespective of the date of purchase or actual production.

The average cost method, relative to FIFO or LIFO, tends to be perceived as a simplistic compromise between the other two inventory accounting methods.

One frequent source of criticism is that the average cost method is improper if the products sold are unique (i.e. a diverse product line), where there is substantial variance in the cost of manufacturing the end product, as well as variance in the selling price.

In practice, the average cost method is most appropriate for companies that sell high-volume products all similarly priced, i.e. the batches of inventories are similar in terms of costs to produce and the sale price.

This limitation of the average cost method is a major reason why widespread adoption of the approach has been slow.

The notable benefit to the weighted average approach is that it is the least time-consuming, yet it can only be used by a particular type of company (i.e. high transaction volume with similarly priced products).

The formula used for the average cost method is as follows.

Suppose a company made the following inventory purchases in the month of July 2022.

With our assumptions all set, we’ll now assume that a customer placed a large order of 200 units on August 1, 2022.

In order to calculate the inventory carrying value, we must first determine our inventory count.

The beginning number of units is 290, which represents the total units purchased in July. We’ll subtract 200 units to calculate 90 as the number of ending units.

In the final part of our modeling exercise, we’ll calculate the inventory carrying value, i.e. the value recorded on the balance sheet.

The beginning balance is the weighted average price, $21.76, multiplied by the beginning number of units.

Next, the cost of goods sold (COGS) is calculated by multiplying the number of units sold by the weighted average price of $21.76.

The ending inventory balance is the beginning balance minus COGS, which results in approximately $1.96 million.

In closing, we’ll perform two checks to confirm our model is correct. 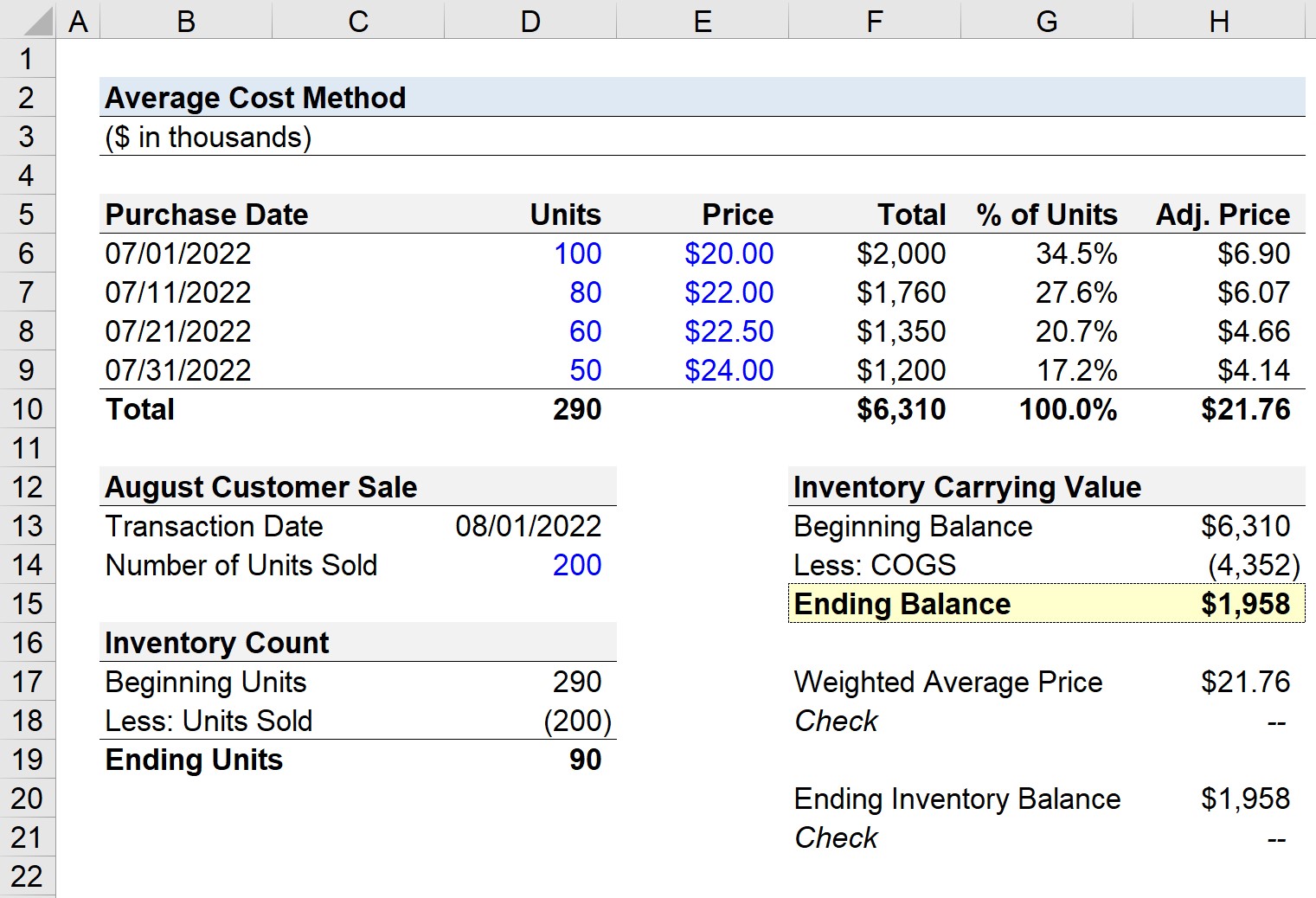