Updated figures for base and bonus investment banking salaries for IB Associates in New York and London. 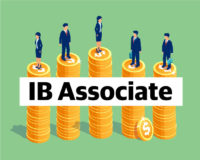 For competitive reasons, base salaries are fairly standard during all 3 years at most investment banks at $150k, $175k, $200k for year 1, year 2, and year 3, respectively.  Meanwhile, bonus disparity based on associate performance grows over time. All in comp is usually just a bit lower at large middle market investment banks , but can get considerably lower at small regional firms outside of New York.  Elite boutiques generally pay in line or better than bulge brackets.

A note on the stub year: Associates usually arrive in the summer after completing business school. Instead of paying the bonus 12 months later, banks pay associates (and analysts) their bonus for just the next 5 months ("stub bonus") to reset them to a December 31 calendar year end. Bonuses for the past year are usually communicated January and February ("bonus season").

As is the case in the United States, investment banking associate base salaries don't vary too much from firm to firm: Stub year associates receive £80k, followed by £95k, £105k, £120k for year 1, year 2, and year 3, respectively.

As you can see from the table below, some bonus disparity exists across firms as well as based on associate performance.  All in comp is usually a bit lower at large middle market investment banks, and slightly higher or in line at Elite boutiques.

Master financial modeling! Used at top investment banks, Wall Street Prep's Premium Package will you set you apart in interviews and on the job.
Learn More

Why are bonuses variable?

The bonus component is a function of individual performance and group/firm performance.  What this means is that you could be a rock star, but if your group/firm is not closing deals and bringing in revenue, your bonus component will suffer.  And, unfortunately, during times when deals are not happening, the work load doesn’t necessarily die down.  You are always pitching with the aim of closing deals even in bad markets, so in slower economic cycles when bonuses decline across the board, being an investment banker becomes less appealing given the grueling hours.