What is Month over Month Growth?

Month over Month Growth measures the rate of change in the value of a metric on a monthly basis, expressed as a percentage of the original value.

How to Calculate Month over Month Growth (Step-by-Step)

The month over month growth rate shows the change in the value of a metric – such as revenue or the number of active users – expressed as a percentage of the prior month’s value.

For mature companies, one of the main use-cases for calculating the monthly growth rate is to understand the cyclicality of a company’s performance.

The monthly growth rate is also important to track for early-stage companies since metrics such as the run rate revenue are based on recent performance due to the high growth rates of such companies.

Calculating the month-over-month growth rate is a two-step process:

The monthly growth rate formula is as follows.

The result will be in the form of a fraction, so the resulting value must then be multiplied by 100 to express the metric as a percentage (%).

For instance, let’s consider if a company had 200 active users in January and 240 in February.

Using the equation below, we can calculate that the monthly growth rate in active users was 20%.

The compounding monthly growth rate (CMGR) refers to the average month-over-month growth of a metric.

The CMGR formula is shown below.

For example, let’s say a mobile application company is attempting to calculate the CMGR of its monthly active users (MAUs).

If we enter those assumptions into the formula, we calculate 6.5% as the CMGR. The interpretation is that on average, between January and December 2022, users grew by 6.5% per month.

Suppose you’re tasked with calculating the monthly growth rate of a company’s active user base.

In January, the company had a total of 100k active users, with the net additions (and losses) in all the subsequent months summarized below.

Starting from January, if we add the monthly change for each month, we arrive at the following active user counts.

Moreover, we can divide the current month by the prior month and then subtract one to arrive at the month-over-month growth rates, as shown above in the far right column.

We can conclude that the company experienced the strongest growth around the Spring during March to June, with growth beginning to decline in the Fall.

Next, the compounding monthly growth rate (CMGR) can be calculated using the equation shown below.

On average, the Company’s user count grew by 8.5% per month between January and December. 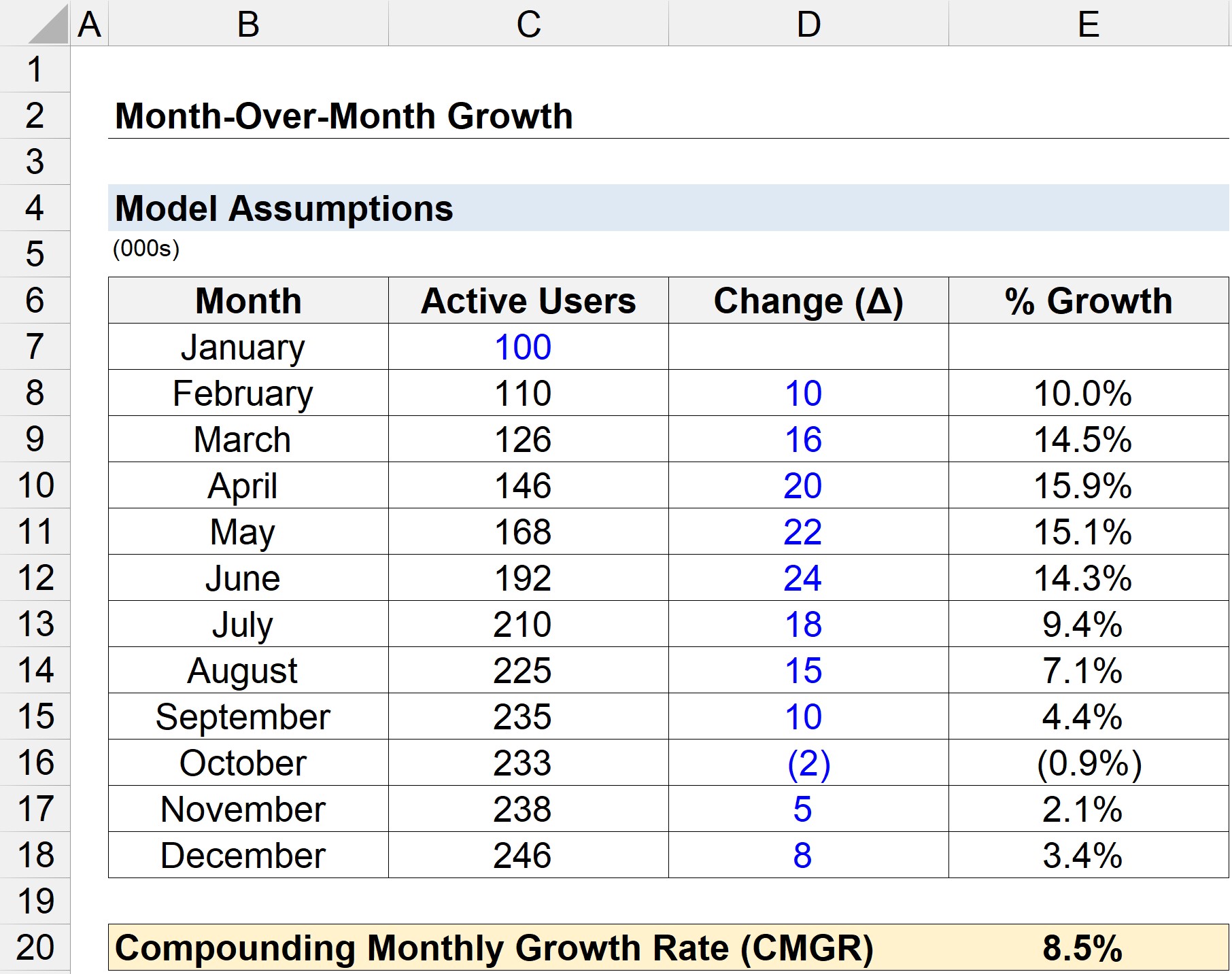