Guide to Understanding the Reinvestment Rate

What is the Reinvestment Rate?

The Reinvestment Rate measures the percentage of a company’s after-tax operating income (i.e. NOPAT) that is allocated to capital expenditures (Capex) and net working capital (NWC).

How to Calculate the Reinvestment Rate

The expected growth rate in operating income is a byproduct of the reinvestment rate and the return on invested capital (ROIC).

The calculation of the rate of a company’s reinvestment is a three-step process:

The formula for calculating the reinvestment rate is as follows.

The change in NWC is considered a reinvestment because the metric captures the minimum amount of cash necessary to sustain operations.

Side Note: The net working capital (NWC) excludes cash and cash equivalents, as well as debt and any related interest-bearing liabilities.

Once calculated, the expected growth in operating income (EBIT) can be calculated by multiplying the rate of reinvestment by the return on invested capital (ROIC).

In practice, a company’s implied rate of reinvestment can be compared to that of industry peers, as well as a company’s own historical rates.

Companies with higher reinvestment activity should exhibit higher operating profit growth – albeit, the growth might require time to realize.

If a company consistently has an above-market rate of reinvestment, yet its growth lags behind peers, the takeaway is that the capital allocation strategy of the management team could be sub-optimal.

While increased spending by a company can drive future growth, the strategy behind where the capital is being spent is just as important.

A clear trend of reduced reinvestment, in contrast, could simply mean that the company is more mature, as reinvestment opportunities tend to decline in the later stages of a company’s life cycle.

Suppose we’re tasked with calculating the reinvestment rate of a company using the following assumptions.

From the financials listed above, we can reasonably assume the company is relatively mature, given how depreciation as a percentage of CapEx is 80%.

If the company were unprofitable at the operating income line, using the reinvestment rate is not going to be feasible.

The change in NWC is equal to –$40k, which represents a cash outflow (“use” of cash), as more cash is tied up in operations.

Since a negative change in NWC is a cash “outflow,” the -$40k increases the reinvestment needs of our company.

With the numerator complete, the final step before arriving at our company’s rate of reinvestment is calculating the tax-affected EBIT, or “NOPAT”.

In closing, the reinvestment rate of our company is 3.6%, which we calculated by dividing the sum of the net Capex and the change in NWC by NOPAT. 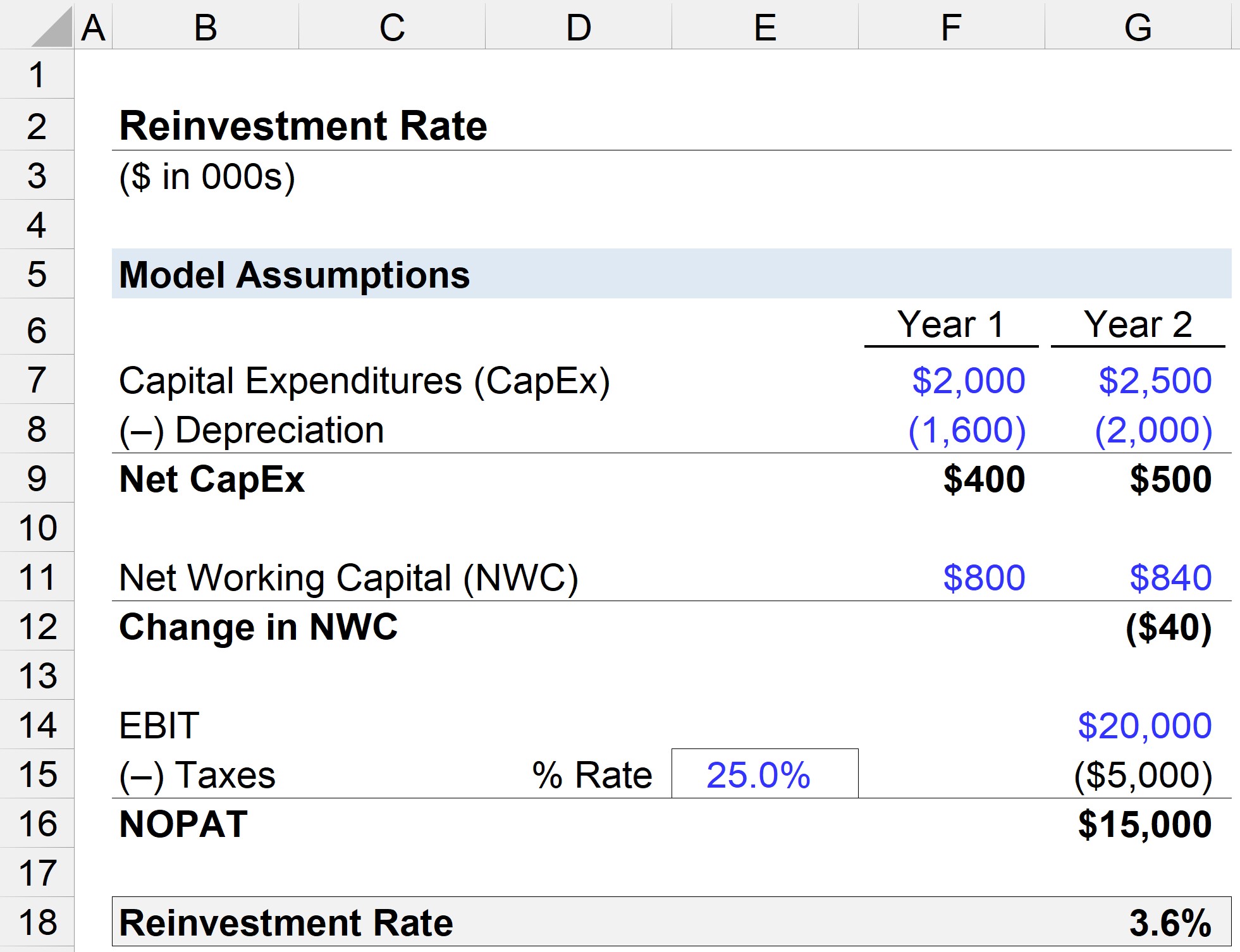 Hello, nice work!!
I would like to ask; If the Change in WC were +40 instead of -40, would you add it to Net CAPEX or would you subtract it from the Net CAPEx?
Thanks