What is the Operating Ratio?

The Operating Ratio measures how cost-efficient a company is by comparing its operating costs (i.e. COGS and SG&A) to its sales.

The operating ratio is calculated by dividing a company’s total operating costs by its net sales.

Sales represent the starting line item of the income statement (“top line”), whereas operating costs refer to the routine expenses incurred by a company as part of its normal course of operations.

The formula for calculating the operating ratio divides a company’s operating costs by its net sales.

While a company’s sales can be easily found on the income statement, calculating a company’s total operating expenses requires adding up the appropriate expenses, as well as potentially removing the effects of certain non-recurring items.

If a company’s operating ratio is 0.60, or 60%, then this ratio means that $0.60 is spent on operating expenses for each dollar of sales generated.

The remaining $0.40 is either spent on non-operating expenses or flows down to net income, which can either be kept as retained earnings or issued as dividends to shareholders.

How to Interpret the Operating Ratio

In general, the lower the operating ratio, the more likely the company can efficiently generate profits.

One issue with the operating ratio is that the effects of operating leverage are neglected.

For instance, if a company with high operating leverage – i.e. more fixed costs than variable costs – is exhibiting strong growth in sales, the proportion of its total operating expenses relative to its sales tends to decline.

The company’s cost structure (and profit margins) are positioned to benefit from such cases, so the shift does not necessarily indicate that management is running the company any better.

Also, as with most ratios, comparisons with other companies are useful only if the chosen peer group consists of close competitors of a relatively similar size and maturity level.

When making historical comparisons with a company’s own year-over-year performance, the operating ratio can bring attention to the potential improvement in efficiency – but to reiterate from earlier, further investigation is required to determine the true cause of the improvement.

In other words, the operating ratio is most useful for preliminary analysis and spotting trends to further investigate, rather than as a standalone metric to directly reference and from which to make conclusions.

After subtracting the company’s COGS from its net sales, we are left with $40 million in gross profit (and 40% gross margin).

In the next step, we subtract SG&A – the only operating expense – from gross profit to calculate the company’s operating income (EBIT) of $20 million (and 20% operating margin).

Using those assumptions, the total operating costs incurred by our company is $80 million.

If we divide our company’s total costs by its net sales, the operating ratio comes out as 80% – which is the inverse of the 20% operating margin.

The 80% ratio implies that if our company generates one dollar of sales, $0.80 is spent on COGS and SG&A. 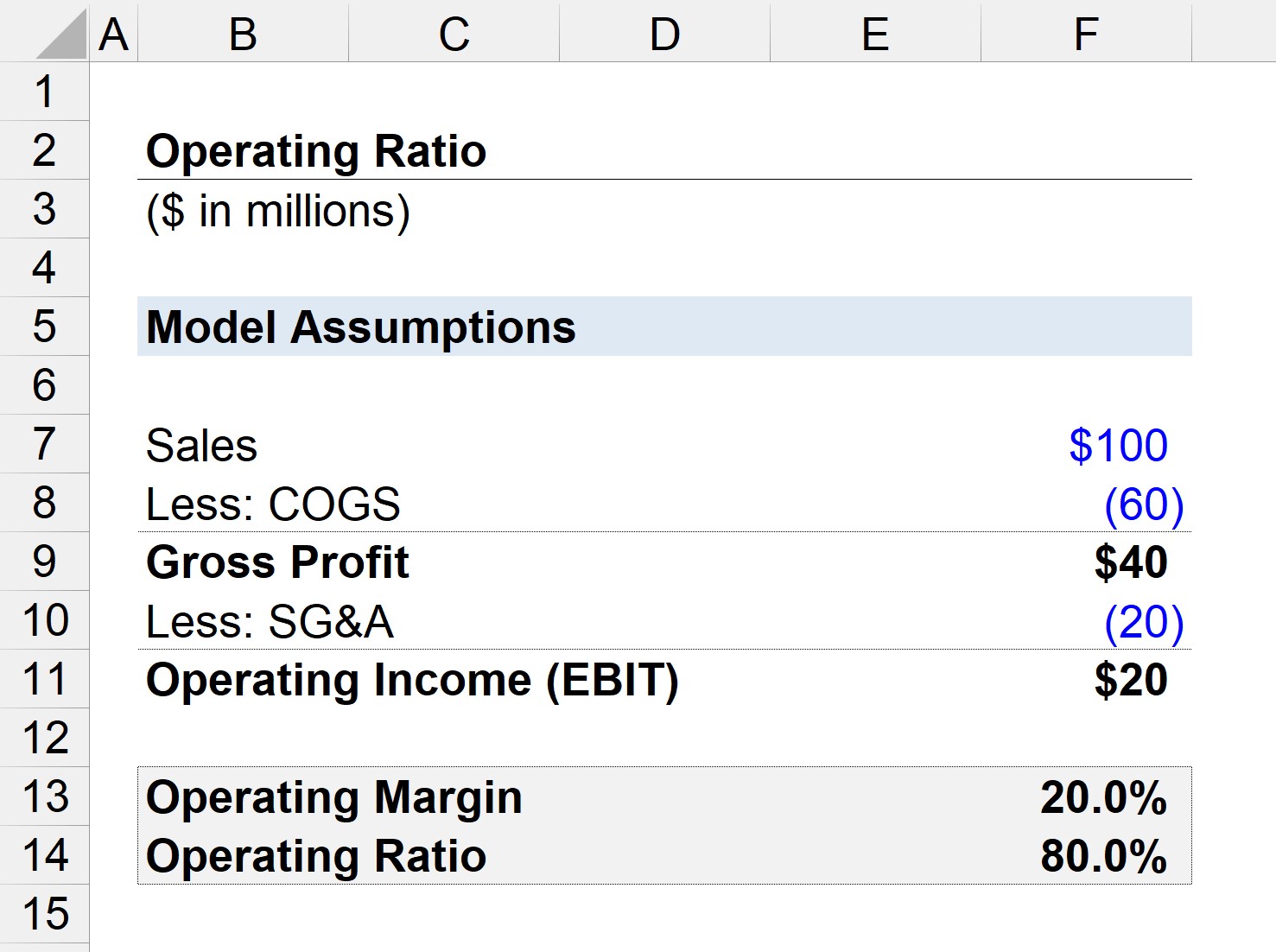