Guide to Understanding the Break Even Point (BEP)

What is Break Even Point?

The Break Even Point is the necessary level of output for a company’s revenue to be equal to its total costs – or said differently, the inflection point at which a company begins to generate a profit.

How to Calculate Break Even Point (Step-by-Step)

For all business owners, particularly during the earlier stages of a business, one of the most crucial questions to answer is: “When will my business break even?”

All businesses share the similar goal of eventually becoming profitable in order to continue operating.

An unprofitable business eventually runs out of cash on hand, and its operations can no longer be sustained (e.g., compensating employees, purchasing inventory, paying office rent on time).

By understanding the required output to break even, a company can set revenue targets accordingly, as well as adjust its business strategy such as the pricing of its products/services and how it chooses to allocate its capital.

If a company has reached its break-even point, this means the company is operating at neither a net loss nor a net gain (i.e. “broken even”).

All incremental revenue beyond this point contributes toward the accumulation of more profits for the company.

Conducting a break-even analysis is a prerequisite to setting prices appropriately, establishing clear and logical sales target goals, and identifying weaknesses in the current state of the business model that could benefit from improvements (e.g., sales tactics and marketing strategies).

Furthermore, established companies with a diverse portfolio of product/service offerings can estimate the break-even point on an individualized product-level basis to assess whether adding a certain product would be economically viable. In effect, the analysis enables setting more concrete sales goals as you have a specific number to target in mind.

The formula for calculating the break-even point (BEP) involves taking the total fixed costs and dividing the amount by the contribution margin per unit.

To take a step back, the contribution margin is the selling price per unit minus the variable costs per unit, and this metric represents the amount of revenue remaining after meeting all the associated variable costs accumulated to generate that revenue.

That said, when a company’s contribution margin (in dollar terms) is equal to its fixed costs, the company is at its break-even point.

If its contribution margin exceeds its fixed costs, then the company actually starts profiting from the sale of its products/services.

For example, if a company has $10,000 in fixed costs per month, and their product has an average selling price (ASP) of $100, and the variable cost is $20 for each product, that comes out to a contribution margin per unit of $80.

Then, by dividing $10k in fixed costs by the $80 contribution margin, you’ll end up with 125 units as the break-even point, meaning that if the company sells 125 units of its product, it’ll have made $0 in net profit.

Or, if using Excel, the break-even point can be calculated using the “Goal Seek” function.

After entering the end result being solved for (i.e., the net profit of zero), the tool determines the value of the variable (i.e., the number of units that must be sold) that makes the equation true.

Let’s say that we have a company that sells products priced at $20.00 per unit, so revenue will be equal to the number of units sold multiplied by the $20.00 price tag.

In terms of its cost structure, the company has fixed costs (i.e., constant regardless of production volume) that amounts to $50k per year. Recall, fixed costs are independent of the sales volume for the given period, and include costs such as the monthly rent, the base employee salaries, and insurance.

Moving onto our final assumption, the variable costs directly associated with the production of the products being sold are $10.00.

In contrast to fixed costs, variable costs increase (or decrease) based on the number of units sold. If customer demand and sales are higher for the company in a certain period, its variable costs will also move in the same direction and increase (and vice versa).

The total variable costs will therefore be equal to the variable cost per unit of $10.00 multiplied by the number of units sold.

We now have the assumptions in place to use the “Goal Seek” function in Excel (Alt ➝ A ➝ W ➝ G).

Upon doing so, the number of units sold cell changes to 5,000, and our net profit is equal to zero, as shown below in the screenshot of the finished solution.

Quantifying the required number of units to be sold to have a net profit of zero was our intended goal, which in this particular scenario, the company must sell 5k units of its products to break even and start to generate a profit from its operations.

As we can see from the sensitivity table, the company operates at a loss until it begins to sell products in quantities in excess of 5k. For instance, if the company sells 5.5k products, its net profit is $5k.

Alternatively, the break-even point can also be calculated by dividing the fixed costs by the contribution margin.

And just like the output for the goal seek approach in Excel, the implied units needed to be sold for the company to break even come out to 5k. 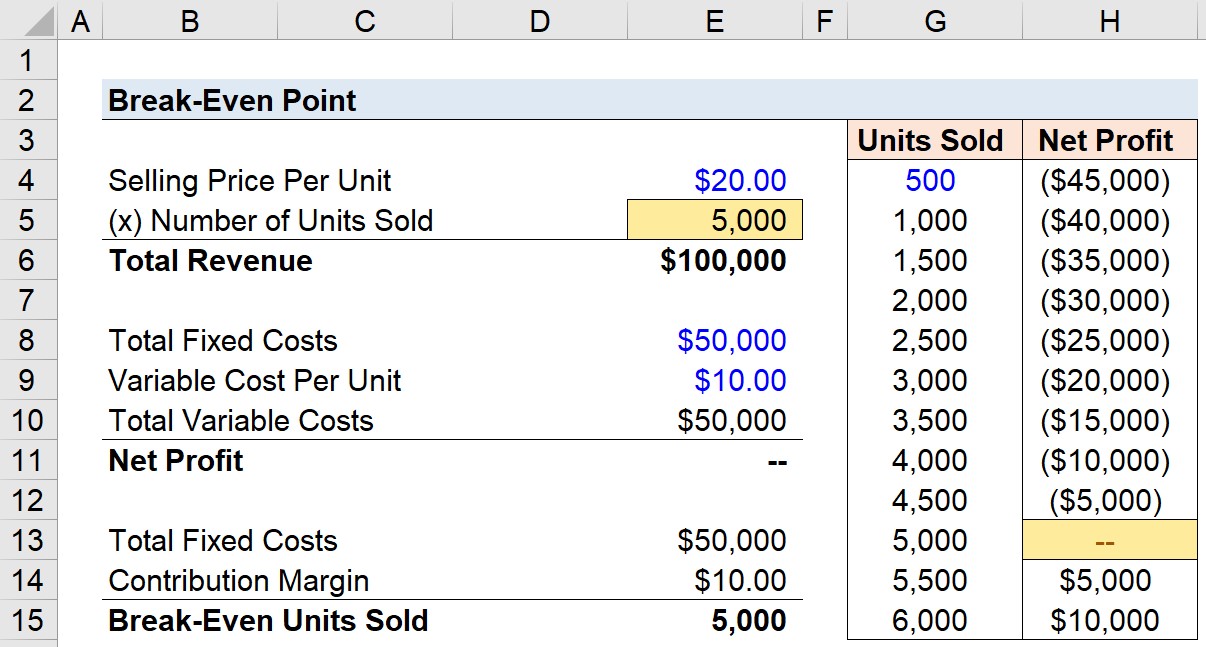 what are the formulas for break-even variable cost and break-even fixed cost?

kindly would like to know how to calculate the break even points given the variable cost,fixed cost and the net profit only

what are the formulas of BEP